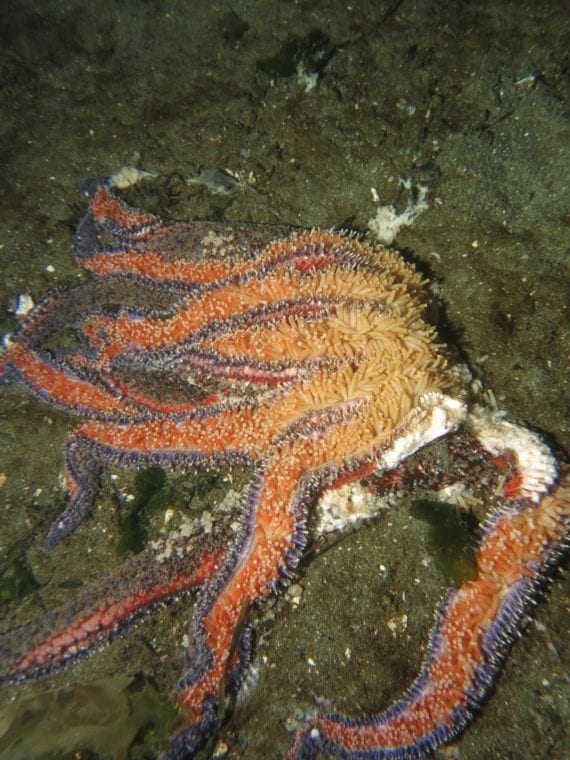 From California to British Columbia, the abundance of sunflower starfish – an important predator in the Northeast Pacific – declined dramatically in both nearshore and deep waters from 2013 to 2015, according to a new study that leveraged citizen science diving surveys. This significant decline was due to the sea star wasting disease that ravaged the waters of the Northeast Pacific during this time. The authors of this study also report an association between the sunflower star decline in shallow waters, and warmer sea surface temperatures. They also emphasize that the sea star’s decline has broader effects. In particular, it is associated with cascading ecosystem impacts on kelp beds, as the decline of the sea star allows the rise of one of the sea star’s main prey, the sea urchin, which eats kelp. From 2013 to 2015, an event known as the sea star wasting disease (SSWD) killed massive numbers of starfish along North America’s west coast, from Alaska to Mexico. Scientists reported that a sea star-associated densovirus from the family Parvoviridae was responsible for the unprecedented deaths of starfish in the intertidal zone. However, the impacts of the Northeast Pacific SSWD on sea star species in the subtidal zone have been less well-known. Initial reports indicated that an important subtidal predator, the sunflower star Pycnopodia helianthoides, declined dramatically in the early stages of the SSWD event; yet, the current status of this starfish at deeper depths in the Northeast Pacific is unclear. Here, Drew Harvell and colleagues assessed the abundance of the sunflower star in shallow nearshore waters as well as in deep offshore waters spanning California to British Columbia. From 2006 to 2017, 10,956 diver surveys of shallow waters reported that the abundance of sunflower starfish decreased; from 2006 to 2014, divers reported seeing anywhere from two to 100 stars during their dives, but after 2014, at least 60% of surveys and up to 100% in California and Oregon reported zero or one sightings of sunflower stars in shallow waters. In deep offshore waters, the authors estimated the average yearly biomass collected in 8,968 bottom trawls from California to Washington from 2004 to 2016. The stars’ biomass decreased 100% in California and Oregon during 2013 to 2015. Further analysis indicated that the timing of the highest declines in nearshore waters matched with abnormally warm sea surface temperatures.