KERI, reducing the size and weight of medical mri equipment by more than half

Technology that can create a superconducting electromagnet, the key component of MRI, safely and strongly using an insulation-conduction transforming substance 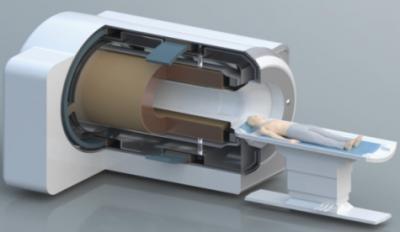 The Superconductivity Research Center of the Korea Electrotechnology Research Institute (KERI, President Gyu-ha Choe) under the Ministry of Science and ICT has developed a superconducting insulation technology that can significantly reduce the size and weight of medical magnetic resonance imaging (MRI) equipment.

While many hospitals, both domestic and international, face many difficulties in facility management due to the large size and heavy weight of MRI equipment, the development of this technology, led by the team of Dr. Seog-Whan Kim and Dr. Young-Sik Jo of the Superconductivity Research Center, is expected to receive much attention.

MRI transmits a high frequency magnetic field of thousands of hertz to the human body, and displays the image signals generated from atomic nuclei in the body in a 2D or 3D cross-sectional image. It does not use radiation like X-rays and CT, so it is safe, and the angle in the body needed to be recorded can be freely chosen. It has very high resolution and is widely used in modern medicine.

Resolution is the most important thing for an accurate MRI diagnosis, and a stronger magnetic field results in better quality. Most existing MRIs use a superconducting electromagnet to create a powerful magnetic field. Superconductivity is the phenomenon where metal or a compound is cooled below a certain temperature has almost no resistance to current flow. Using this principle, a superconducting electromagnet has “zero” electric resistance and much more current can flow through it than copper wire with the same cross-section area, which has a significantly effect on improving the performance of MRI equipment.

However, a fatal problem exists in superconducting electromagnets. Part of the superconducting wire suddenly escapes the superconducting state beyond certain amount of electricity. In this case, it causes greater resistance than normal metal, and eventually heats up and burns. This phenomenon hasn’t been clearly explained yet, and there is no solution in the world of science as well.

KERI research team developed “smart insulation” technology that can solve the heating issue of superconducting wire while significantly reducing the amount of copper used. This special technology performs insulation during normal operation so that electricity doesn’t leak, and when superconducting wire starts heating, it automatically transforms into a conductor to help electricity flow between lines.

Whereas a large amount of copper was needed in the past for each line to handle electricity, smart insulation technology can allow the distribution of electricity with nearby wires in the case of heating, so the amount of copper surrounding superconducting wire can be significantly reduced. With this, a “compact” superconducting electromagnet with less risk and high current density can be made.

The research team expects that this technology will be of interest to officials of hospitals with MRI equipment, and is working on technology transfer and commercialization. Patents have been applied for in five countries including Korea, and promotion of the technology will continuously expand through conferences and exhibitions in the future.

China’s plans to solve the mysteries of the moon

Working it out: Researchers find exercise may help fight depression in…