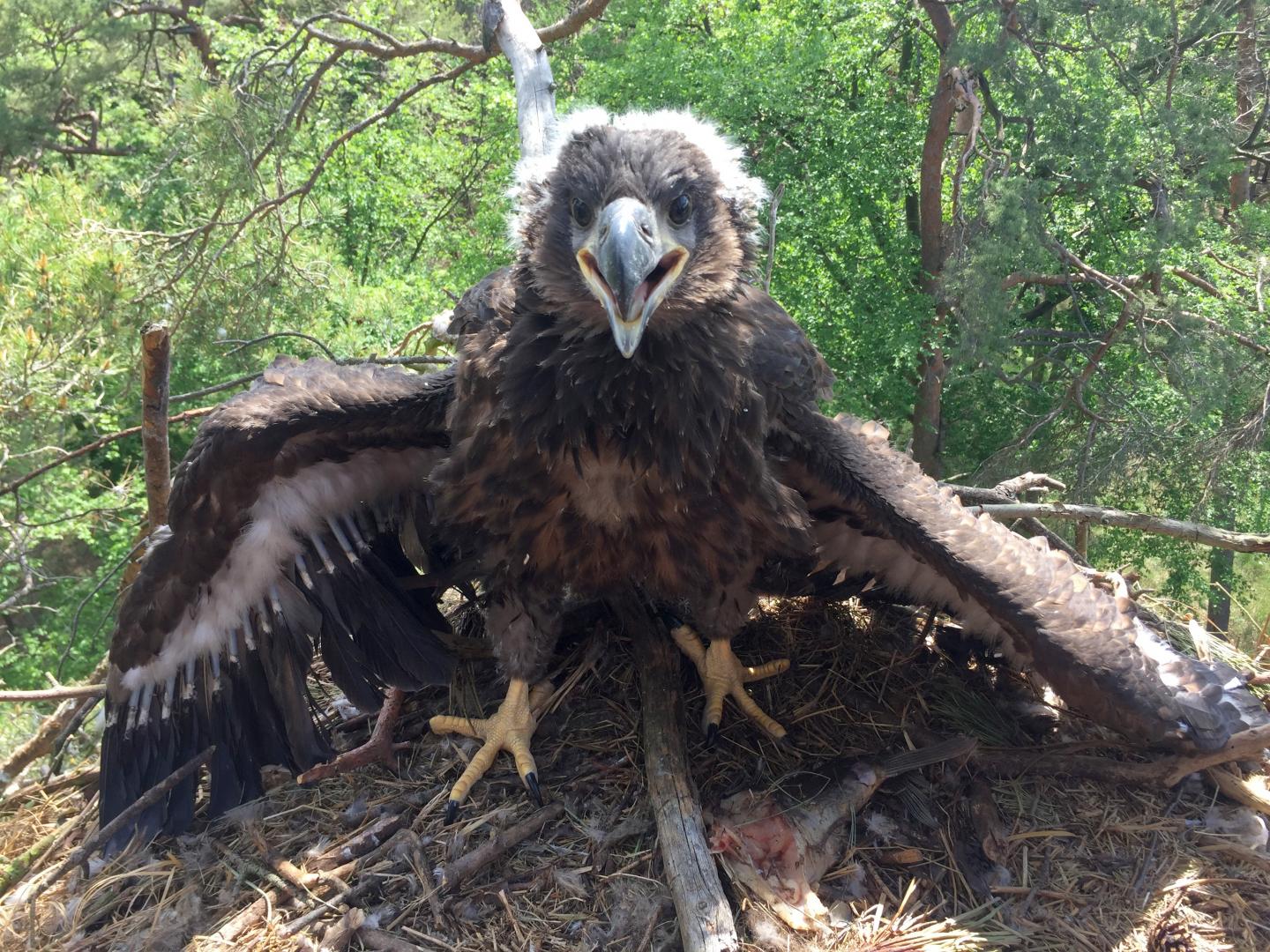 The white-tailed sea eagle is known for reacting sensitively to human disturbances. Forestry and agricultural activities are therefore restricted in the immediate vicinity of the nests. However, these seasonal protection periods are too short in the German federal States of Brandenburg (until August 31) and Mecklenburg-Western Pomerania (until July 31), as a new scientific analysis by a team of scientists from the Leibniz Institute for Zoo and Wildlife Research (Leibniz-IZW) suggests. Using detailed movement data of 24 juvenile white-tailed sea eagles with GPS transmitters, they were able to track when they fledge and when they leave the parental territory: on average, a good 10 and 23 weeks after hatching, respectively. When forestry work is allowed again, most of the young birds are still near the nest. In a publication in the journal IBIS – International Journal of Avian Science, the scientists therefore recommend an extension of the currently existing nest protection periods by one month.

Between 2004 and 2016, bird of prey specialist Dr Oliver Krone and his team from the Leibniz-IZW fitted a total of 24 juvenile white-tailed eagles with GPS transmitters during ringing, which usually takes place between four and six weeks after hatching. The aim was to precisely record and analyse the movements of the younglings in the important life span between the first flight and leaving the parents’ territory. “On average, the juvenile white-tailed sea eagles leave the nest for the first time at the age of 72 days for their maiden flight and, on average, leave their parental territory another 93 days later,” Krone summarises. During this period, the juvenile birds are very active and undertake frequent excursions from the nest, which vary greatly in length and distance. However, the activity in this phase varies greatly from bird to bird and influences the time of departure from the parental territory. “The more frequently a young eagle makes such reconnaissance flights, the later it leaves the territory for good,” explains biologist Marc Engler. The same applies to the quality of this territory: if it offers at least one body of water that is suitable for foraging, the young birds stay with their parents almost four weeks longer.

Both correlations strongly suggest that juvenile white-tailed sea eagles stay as long as possible in the parental territories, provided the conditions are favourable. “If there is more disturbance at a nest, the possibilities of reconnaissance flights for the young eagles are limited and they seem to be forced to disperse earlier,” Krone and Engler conclude. On average, they fledge between the end of May and the beginning of July, so the period until dispersal often extends into September or October. “An extension of the nest protection periods of at least one month is therefore advisable in order to avoid disturbances of juvenile eagles in the nest area and thus prevent early dispersal with possible negative effects on their survival. This applies in particular to the state of Mecklenburg-Western Pomerania, where forestry work and hunting around the white-tailed sea eagle nests can be resumed starting with the beginning of August – when almost two thirds of the younglings still have their centre of life in the parental nest.”

Intensive protection efforts over the last 100 years have saved the sea eagle from extinction in Germany. They were placed under protection in the 1920s, after hunting in particular had reduced the population to a critical level. Meanwhile the population of white-tailed sea eagles has grown back to a stable level. Currently there are about 950 breeding pairs of the white-tailed sea eagle in Germany, projections assume a potential of 1200 breeding pairs for Germany. However, the use of leaded ammunition in hunting still has a negative effect on the birds, which in winter feed on the carcasses of animals left behind by hunters. In addition, a team led by Oliver Krone showed that not only forestry work is a burden for the white-tailed sea eagles, but also the proximity to roads especially paths with pedestrians and cyclists. The team measured concentrations of the hormone corticosterone and its metabolic products in white-tailed sea eagles in northern Germany and correlated these values with potential causes of “stress”. They found that the levels of corticosterone in the birds’ urine are higher the closer a breeding pair’s nest is to trails, paths or roads. This paper was published in October 2019 in the scientific journal “”General and Comparative Endocrinology”.