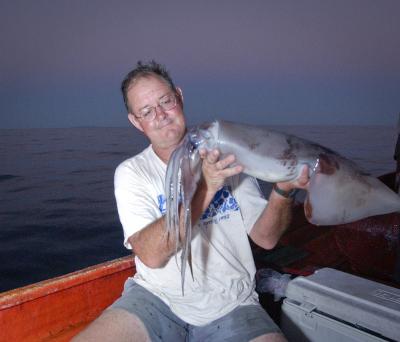 The culprit responsible for the decline of Mexico’s once lucrative jumbo squid fishery has remained a mystery, until now. A new Stanford-led study published in the ICES Journal of Marine Science identifies shifting weather patterns and ocean conditions as among the reasons for the collapse, which spells trouble for the Gulf of California’s marine ecosystems and fishery-dependent economies. It could also be a sign of things to come elsewhere.

“What is happening with the jumbo squid is indicative of larger changes impacting marine organisms and ecosystems across the northeast Pacific,” said the study’s lead author, Timothy Frawley, who was a Stanford graduate student when he conducted the research. “In many respects these squid, with their unique and adaptive survival strategies, function as sentinels of environmental change.” William Gilly, professor of biology, was senior author of the study.

Also known as the Humboldt squid, these large, predatory creatures are targets of the world’s biggest invertebrate fishery, commercially fished in Peru, Chile and Baja California. In 2008 the Gulf of California jumbo squid fishery employed over 1,500 fishing vessels and was the fourth largest fishery in all of Mexico. By 2015, it had completely collapsed, and as of yet shows no sign of recovery.

To better understand the factors that drove the collapse and have inhibited recovery, the team compiled official fisheries records and reports, oceanographic data obtained from satellites and instruments deployed at sea, and biological measurements of over 1,000 individual squid. Comparing these data sources over time, the research team identified and described changes in ocean habitat that coincided with reductions in squid size, life span and fisheries productivity.

They found that long-standing currents and circulation patterns within the Gulf of California have shifted over the past decade. Previously, warm-water El Niño conditions that are inhospitable to the large squid were followed by cool-water La Niña phases, allowing the system to recover and recuperate. In recent years La Niña has been conspicuously absent, resulting in increasingly tropical waters across the region. As these waters warm, cooler, nutrient-rich waters ideal for both the jumbo squid and their prey have become scarce.

In response to new, warmer ocean conditions the squid limit their growth, shorten their life span and reproduce earlier. As a result, smaller, more difficult to catch and less profitable squid have become the norm, shuttering the entire squid fishing industry in the region.

“You can think of it as a sort of oceanographic drought,” Frawley said. “Until the cool-water conditions we associate with elevated primary and secondary production return, jumbo squid in the Gulf of California are likely to remain small.”

Other fisheries at risk

Though careful not to discount overfishing as a potential contributing factor in the collapse of the fishery, the researchers cite the persistence of the small-size squid in the years since fishing has ended as evidence of additional factors at play.

“These results show that our traditional understanding of the dynamics underlying fisheries, their management and sustainability are all at risk when environmental change is rapid and persistent,” said Larry Crowder, study co-author and the Edward Ricketts Provostial Professor of Marine Ecology and Conservation at Stanford Hopkins Marine Station.

The change in squid populations marks a drastic and persistent shift in the larger ecosystem, a shift likely to have significant implications for coastal fishing communities across the region, according to the study’s authors. In a related study, Frawley examines the squid fishery to understand the processes through which small-scale fishers perceive and respond to such changes.

“Small-scale fishers in Baja California and elsewhere are increasingly recognizing the value of diversifying what they catch as a means of remaining flexible and resilient,” Frawley said. “For the fishers, as for the squid, being able to adapt in real-time appears essential in the face of increasing climatic and oceanographic variability.”

Could the heat of the Earth’s crust become the ultimate energy source?

Some Pacific salmon populations are especially at risk from climate change

A little good is good enough — excuses and ‘indulgence…