WASHINGTON, Nov. 9, 2022 – AIP and the National Society of Black Physicists have awarded Trevor Rhone the 2022 Joseph A. Johnson III Award for Excellence and Cacey Bester an Honorable Mention. 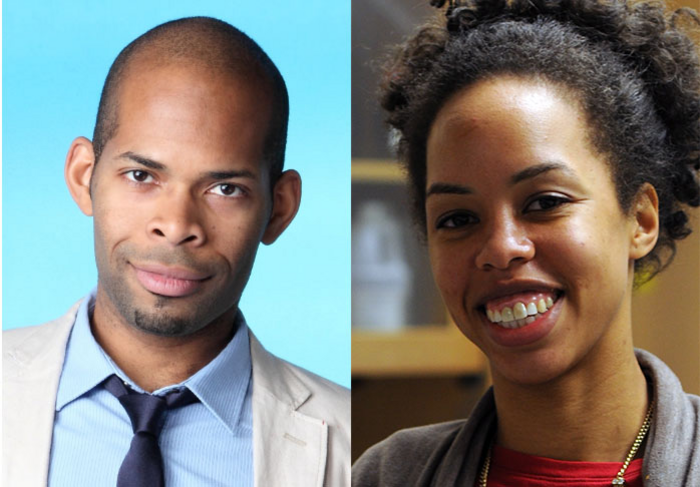 WASHINGTON, Nov. 9, 2022 – AIP and the National Society of Black Physicists have awarded Trevor Rhone the 2022 Joseph A. Johnson III Award for Excellence and Cacey Bester an Honorable Mention.

Now in its third year, the award recognizes early-career scientists who demonstrate scientific ingenuity and powerful mentorship and service – the core values of NSBP founder Joseph A. Johnson.

“Since its inception, this award has seen high-quality candidates across the board.  This was as true this year as any other,” said Michael Moloney, CEO of AIP. “We are pleased to recognize both Dr. Rhone and Dr. Bester for their exceptional science and dedication to their students. Their contributions to the physical science community exemplify the legacy of Dr. Joseph A. Johnson.”

Rhone, an assistant professor at Rensselaer Polytechnic Institute (RPI), searches for novel two-dimensional magnetic materials using a combination of computer simulations and artificial intelligence. Some estimates put the number of possible candidate materials at 10 to the power of 100 – approximately the same number of atoms in the observable universe. Instead of relying on slow and laborious experiments to find a material with desirable properties, Rhone uses AI as a guide to accelerate materials discovery.

“When you’re at home, and you want to find a recipe to bake a cake, you might ask Alexa,” he said. “Alexa finds a recipe and tells you what ingredients you need and how to make it. Perhaps one day, we’ll ask an ‘Atom-a’ equivalent for the recipe to make the next generation of hard drives for data storage.”

Growing up in Jamaica, Rhone learned the importance of a good education. He obtained his undergraduate degree at Macalester College, then earned his doctorate from Columbia University for experimental studies of two-dimensional electron systems. He transitioned to materials informatics research while working at the National Institute of Materials Science in Japan and as a Future Faculty Leaders postdoctoral fellow at Harvard University before becoming an assistant professor at RPI.

In the physics department at RPI, Rhone co-founded the DEI committee, which actively promotes equity and inclusion in the classroom. This work follows a history of his mentoring underrepresented minority students, providing physics demonstrations for high schoolers, and volunteering with NSBP.

Rhone says many mentors supported and encouraged him along his journey, but his father was the most influential of all.

“He would tell me stories about how he influenced the lives of others. There’s one story where he, a playwright, encouraged someone to pursue theater, his lifelong passion, despite the threat of great hardship. My father gave people the courage to pursue their dreams and helped them to find happiness doing so,” said Rhone. “Mentoring, teaching, and supporting the physics community I feel helps me to honor the memory of my father. This award is a nice reminder of what is important and it motivates me to do more.”

“Dr. Rhone and Dr. Bester are advancing the physical sciences in so many ways,” said Hakeem Oluseyi, president of the National Society of Black Physicists. “Their research is creative and cutting-edge. Meanwhile, their emphasis of mentoring and community-building is inspiring.”

“Individual grains, such as sand, coffee, and rice, are easy to describe,” she said. “But if you have thousands, or even millions of those grains, then that becomes extremely challenging. That’s because collectively, the grains can behave like a solid in some instances, or like a liquid in other instances.”

In her lab, Bester conducts jamming and creeping experiments. Undergraduates play a key role, confining grains and studying the transition from liquid to solid and connecting these ideas to geological implications.

She hopes to give her students the same experiences she had as a young researcher. At Southern University and A&M College in Baton Rouge, Bester was the only student in her introductory physics class taught by Stephen McGuire, a former NSBP president.

“It was super intimidating. I had to answer every question,” she said. “It was really scary at first, but I came to enjoy having that attention. Not only did we do the required curriculum, but I learned about what current physics research looked like.”

From there, Bester participated in a Research for Undergraduates Experience at the University of Chicago, where she studied droplets splashing. She pursued the same line of research in Chicago for her doctorate, then worked as postdoctoral research associate at Duke University before becoming an assistant professor at Swarthmore College.

“It feels really amazing to reach the point where my work is being acknowledged in this way,” said Bester. “It means so much to me, especially to be acknowledged by people that I have admired for such a long time: leaders of the National Society of Black Physicists and the American Institute of Physics.”

The award and honorable mention will be presented at the National Society of Black Physicists 2022 Conference on Nov. 9 in Charlottesville, Virginia.

ABOUT THE JOSEPH A. JOHNSON III AWARD FOR EXCELLENCE

Joseph A. Johnson III, of Florida A&M University, was a pioneering and renowned experimental physicist, mentor to many Black doctoral students and a founder of the National Society of Black Physicists. In honor of his iconic legacy, the American Institute of Physics and NSBP have partnered to recognize an NSBP physicist who exemplifies Johnson’s ingenuity as a scientist and passion for mentorship and service. This honor comes with a $5,000 award along with an invitation to give physics department colloquia at partner universities.

Founded in 1977 at Morgan State University, the mission of the National Society of Black Physicists is to promote the professional well-being of African American physicists and physics students within the international scientific community and within society at large. The organization seeks to develop and support efforts to increase opportunities for African Americans in physics and to increase their numbers and visibility of their scientific work. It also seeks to develop activities and programs that highlight and enhance the benefits of the scientific contributions that African American physicists provide for the international community. The society seeks to raise the general knowledge and appreciation of physics in the African American community.