Using data collected over two decades ago, scientists from the Johns Hopkins Applied Physics Laboratory (APL) in Laurel, Maryland, have compiled the first complete map of hydrogen abundances on the Moon’s surface. The map identifies two types of lunar materials containing enhanced hydrogen and corroborates previous ideas about lunar hydrogen and water, including findings that water likely played a role in the Moon’s original magma-ocean formation and solidification. 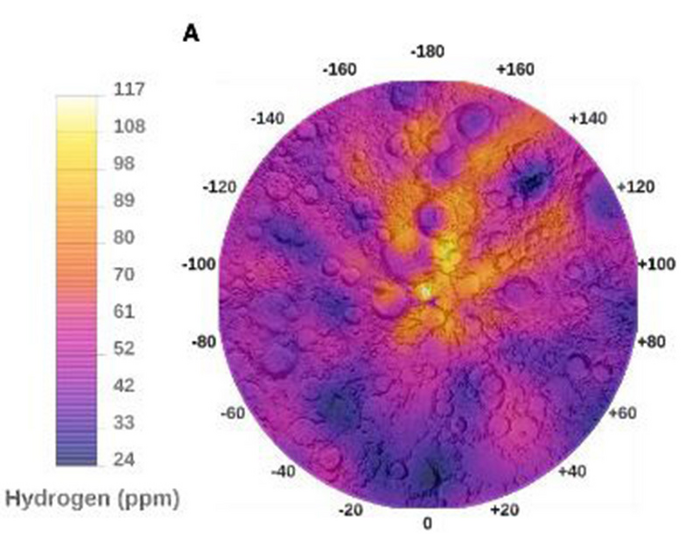 Using data collected over two decades ago, scientists from the Johns Hopkins Applied Physics Laboratory (APL) in Laurel, Maryland, have compiled the first complete map of hydrogen abundances on the Moon’s surface. The map identifies two types of lunar materials containing enhanced hydrogen and corroborates previous ideas about lunar hydrogen and water, including findings that water likely played a role in the Moon’s original magma-ocean formation and solidification.

APL’s David Lawrence, Patrick Peplowski and Jack Wilson, along with Rick Elphic from NASA Ames Research Center, used orbital neutron data from the Lunar Prospector mission to build their map. The probe, which was deployed by NASA in 1998, orbited the Moon for a year and a half and sent back the first direct evidence of enhanced hydrogen at the lunar poles, before impacting the lunar surface.

“Imagine you’re playing a game of pool and the cue ball represents neutrons and the billiard balls represent hydrogen,” explained Lawrence. “When you hit a billiard ball with your cue ball, the cue ball stops moving and the billiard ball is pushed into motion, because both objects have the same mass. Similarly, when a neutron comes in contact with hydrogen, it dies and stops moving, and the hydrogen is sent into motion. So when we see a fewer number of neutrons moving about, it’s an indication hydrogen is present.”

The team calibrated the data to quantify the amount of hydrogen by the corresponding decrease of neutrons measured by the Neutron Spectrometer, one of five instruments mounted on Lunar Prospector to complete gravitational and compositional maps of the Moon. The findings were published in the Journal of Geophysical Research.

“We were able to combine data from lunar soil samples from the Apollo missions with what we’ve measured from space and finally put together a full picture of lunar hydrogen for the first time,” continued Lawrence.

The team’s map confirms enhanced hydrogen in two types of lunar materials. The first, at the Aristarchus Plateau, is home to the Moon’s largest pyroclastic deposit. These deposits are fragments of rock erupted from volcanoes, corroborating prior observations that hydrogen and/or water played a role in lunar magmatic events. The second is KREEP-type rocks. KREEP is an acronym for lunar lava rock that stands for potassium (K), rare earth elements (REE) and phosphorus (P).

“When the Moon originally formed, it’s largely accepted that it was molten debris from a huge impact with Earth,” Lawrence said. “As it cooled, minerals formed out of the melt, and KREEP is thought to be the last type of material to crystallize and harden.”

Lawrence, who was part of the original team that studied initial data from the Lunar Prospector mission in 1998, said building on existing efforts to complete a full map of Earth’s nearest neighbor took time.

“Finalizing the analysis took a number of years,” said Lawrence. “As we were sorting through everything, we began making corrections to data that we discovered was not hydrogen. We went back and fine-tuned previous analyses, and in large part, we were able to do that because of discoveries from other missions. We are continuously building off of previous knowledge and stepping into new territory.”

This new map not only completes the inventory of hydrogen on the Moon but could also lead to quantification of how much hydrogen and water was present in the Moon when it was born. In 2013, APL researchers also confirmed the presence of water ice at the poles on the planet Mercury using data from the neutron spectrometer on the APL-built MESSENGER spacecraft. These discoveries are important not only for understanding the solar system but also in planning future human exploration of the solar system.