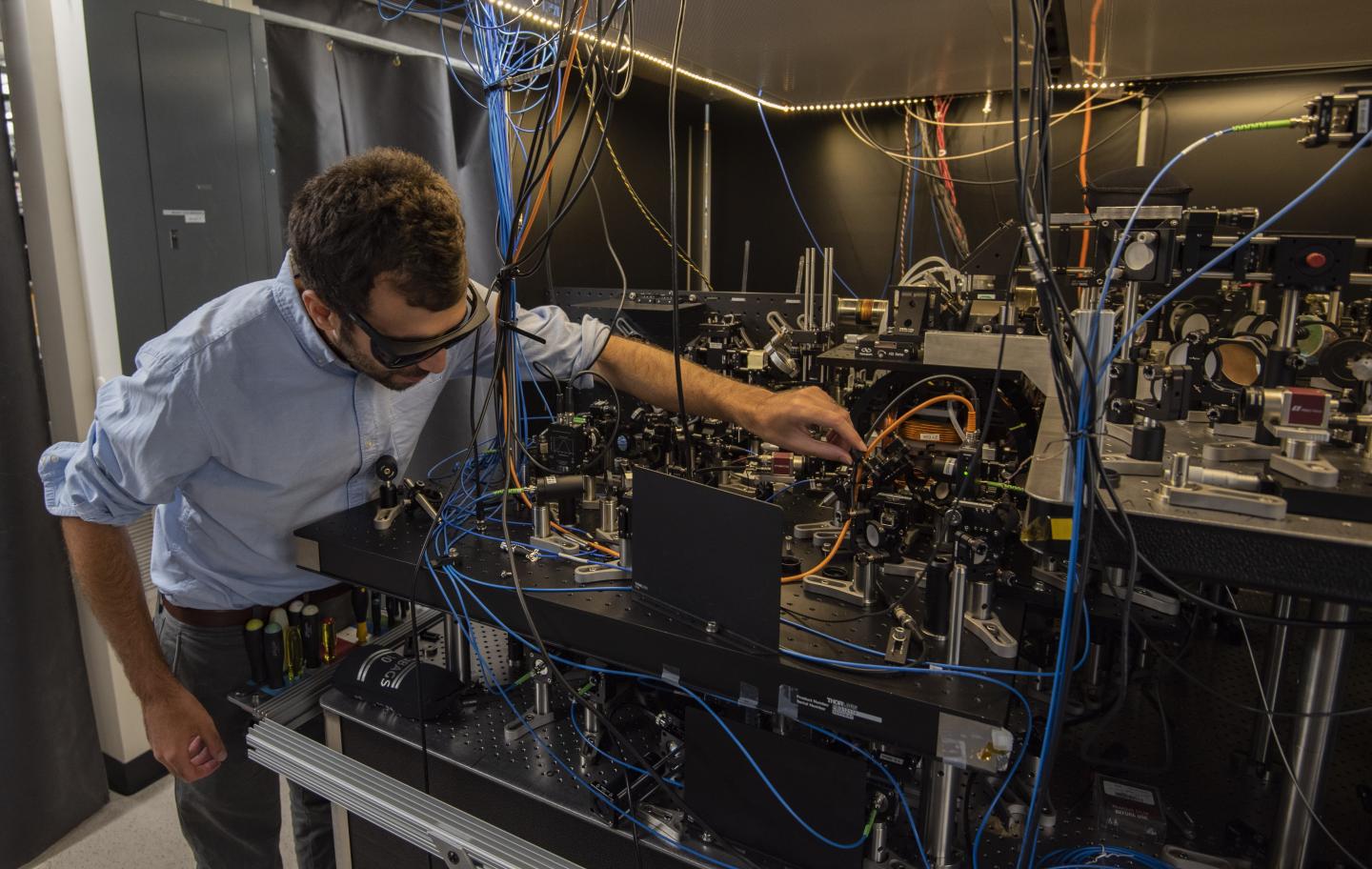 JILA physicists have demonstrated a novel atomic clock design that combines near-continuous operation with strong signals and high stability, features not previously found together in a single type of next-generation atomic clock. The new clock, which uses laser “tweezers” to trap, control and isolate the atoms, also offers unique possibilities for enhancing clock performance using the tricks of quantum physics.

Described in a paper to be published online Sept. 12 by the journal Science, the new clock platform is an array of up to 10 strontium atoms confined individually by 10 optical tweezers, which are created by an infrared laser beam aimed through a microscope and deflected into 10 spots.

JILA is a joint research and training institute operated by the National Institute of Standards and Technology (NIST) and the University of Colorado Boulder.

While JILA researchers have yet to fully evaluate the new clock’s performance, preliminary data suggest the design is promising. The tweezer clock is “on duty” self-verifying its performance 96% of the time because it needs little downtime to prepare new atoms, and the atoms are well-isolated so they are less likely to interfere with one another. Both of these strengths are shared with one of the world’s leading clocks, a clock based on a single ion (electrically charged atom). The tweezer clock also can provide the strong signals and stability of a multi-atom lattice clock, which traps atoms in a grid of laser light.

“The tweezer design’s long-term promise as a competitive clock is rooted in its unique balancing of these capabilities,” JILA/NIST physicist and project leader Adam Kaufman said.

Next-generation atomic clocks stabilize the color, or frequency, of a laser to atoms “ticking” between two energy levels. The tweezer clock traps and controls atoms individually to maintain ticking stability and detects this behavior without losing them, and thus can reuse the same atoms many times without needing to constantly reload new ones.

“The tweezer design addresses various issues with other atomic clocks,” Kaufman said. “Using our technique, we can hold onto atoms and reuse them for as long as 16 seconds, which improves the duty cycle–the fraction of time spent using the atoms’ ticking to correct the laser frequency–and precision. The tweezer clock can also get a single atom very rapidly into a trap site, which means there is less interference and you get a more stable signal for a longer time.”

NIST and JILA researchers have been building next-generation atomic clocks for many years. These clocks operate at optical frequencies, which are much higher than current time standards based on microwave frequencies. The research is helping to prepare for the future international redefinition of the second, which has been based on the cesium atom since 1967. Optical clocks also have applications beyond timekeeping such as measuring Earth’s shape based on gravity measurements (called geodesy), searching for the elusive dark matter thought to make up most of the matter in the universe, and enhancing quantum information sciences.

To create the tweezer clock, an infrared laser beam is aimed into a microscope and focused to a small spot. Radio waves at 10 different frequencies are applied sequentially to a special deflector to create 10 spots of light for trapping individual atoms. The traps are refilled every few seconds from a pre-chilled cloud of atoms overlapped with the tweezer light.

The atoms held by the tweezers are excited by a laser stabilized by a silicon crystal cavity, in which light bounces back and forth at a specific frequency. This “clock laser” light–provided by co-author and NIST/JILA Fellow Jun Ye’s lab–is applied perpendicular to the tweezer light, along with an applied magnetic field. Non-destructive imaging reveals whether the atoms are ticking properly; the atoms only emit light, or fluoresce, when in the lower-energy state.

Too many atoms in the system can lead to collisions that destabilize the clock, so to get rid of extra atoms, the researchers apply a pulse of light to create weakly bound molecules, which then break apart and escape the trap. Tweezer sites are left either with one atom or empty; with each run of the experiment, each tweezer has about a 50% chance of being empty or containing a single atom. Having at most one atom per site keeps the ticking stable for longer time periods.

Like ordinary metal tweezers, the laser tweezers offer pinpoint control, which enables researchers to vary the spacing between atoms and tweak their quantum properties. Kaufman has previously used optical tweezers to “entangle” two atoms, a quantum phenomenon that links their properties even at a distance. The tweezers are used to excite the atoms so their electrons are more weakly bound to the nucleus. This “fluffy” state makes it easier to trap the atoms in opposing internal magnetic states called spin up and spin down. Then a process called spin exchange entangles the atoms. Special quantum states like entanglement can improve measurement sensitivity and thus may enhance clock precision.

The research team now plans to build a larger clock and formally evaluate its performance. Specifically, the researchers plan to use more tweezers and atoms, with a target of about 150 atoms. Kaufman also plans to add entanglement, which could improve clock sensitivity and performance and, in a separate application, perhaps provide a new platform for quantum computing and simulation.