MELVILLE, N.Y., June 15, 2022 – The Journal of Chemical Physics, in its commitment to recognizing the excellent work of early-career investigators, is proud to announce the 2021 winners of the JCP Best Paper by an Emerging Investigator Awards. 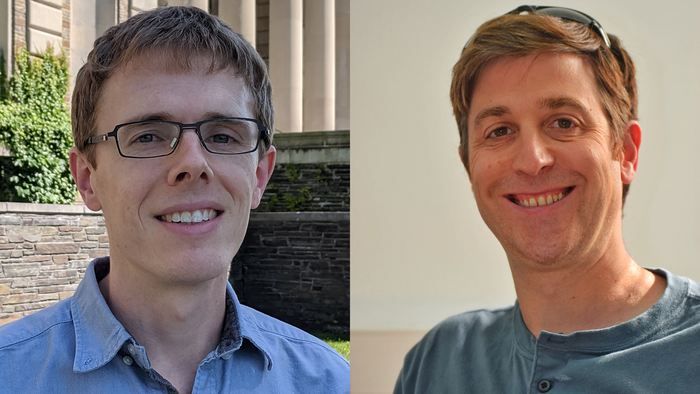 MELVILLE, N.Y., June 15, 2022 – The Journal of Chemical Physics, in its commitment to recognizing the excellent work of early-career investigators, is proud to announce the 2021 winners of the JCP Best Paper by an Emerging Investigator Awards.

The awardees, Andrew Musser and Yoav Green, were selected for their research on molecular polaritons and electroneutrality breakdown in nanopores, respectively.

A selection committee, composed of Editorial Advisory Board members, selected the winners from a pool of papers in the 2021 JCP Emerging Investigators Special Collection, which has a higher standard for acceptance than the journal and is intended to itself be a recognition of excellence. The award includes a $2,000 honorarium and an invitation to write a perspective article for JCP.

To qualify for the award, the principal investigator must be within 10 years of their graduate degree graduation date. Submissions are considered across the entire scope of the journal and are currently open for the 2022 JCP Emerging Investigators Special Collection.

Andrew Musser was recognized for his paper, “Untargeted effects in organic exciton–polariton transient spectroscopy: A cautionary tale,” published in JCP on Oct. 15, 2021. Understanding the nature of excited polariton states formed by strong light-matter interaction in optical cavities is key for advancements in catalysis and electronic devices, according to JCP Editor-in-Chief Tianquan (Tim) Lian.

“This study provides useful guidance on how to correctly assign transient spectral signatures of excited polaritons and will have significant impact to this research field,” Lian said.

Musser and his team discovered that a worryingly large fraction of their signal — and, by extension, the signals reported by other groups — is likely to be the result of artifacts or some uninteresting side effect.

“These optical microcavities are complex and surprisingly sensitive structures, so we have to work substantially harder than usual to be sure that what we’re measuring with standard spectroscopic tools is real,” Musser said. “This paper was really about developing the tools to understand these systems better, and it was very gratifying to see directly that this kind of work is valued.”

Musser received his doctorate from the University of Cambridge, where he explored ultrafast exciton photophysics of organic semiconductors. Following that, he pursued postdoctoral research at the University of Sheffield in the spectroscopy of organic exciton-polaritons, then progressed to Cornell University as an assistant professor in 2019.

At Cornell, Musser’s group applies ultrafast optical spectroscopy and strong light-matter interactions to understand and control the ultrafast dynamics of organic semiconductors, framework materials, and photocatalysts. In basic terms, Musser examines how the behavior of material changes when it is sandwiched between mirrors and forced to interact with light.

“People have shown all sorts of weird and wonderful effects — enhancements to the transport of charge and energy, ways to convert useless ‘dark’ states into emitted light, even redirection of chemical reactions — all by sandwiching molecules between mirrors in just the right way,” said Musser. “But it turns out to be very hard to design, predict, or control these effects, because there are huge fundamental questions about how exactly they work.”

Yoav Green was selected for his paper, “Conditions for electroneutrality breakdown in nanopores,” published Nov. 8, 2021, in JCP.

As the size of systems decrease, new phenomena emerge, and continuum mechanics descriptions are expected to fail. The concept of electroneutrality breakdown in nanopores presents one such possible case. However, Green found the breakdown only occurs for several limited and degenerate scenarios that do not exist in most realistic systems.

“With his analytical study, Yoav Green demonstrates — among other properties — how the breakdown of charge neutrality depends on the width and nature of the dielectric that surrounds the nanopore,” said JCP Associate Editor Francesco Sciortino. “This paper has the potential to be of relevance to several societal challenges, such as water desalination and energy harvesting.”

Green obtained his doctorate from the Technion–Israel Institute of Technology, where his research focused on nanofluidics. He completed his postdoctoral studies at Harvard’s T.H. Chan School of Public Health, working on biomechanics.

As a senior lecturer and assistant professor at Ben-Gurion University of the Negev in Israel, Green currently heads the fluid mechanics laboratory. His group investigates the fundamental physics of ion transport through charged nanochannels using theoretical modeling, numerical simulations, and experiments.

“My lab focuses on nanofluidics and electrokinetics, the study of electrically driven fluid mechanics at the nanoscale,” said Green. “We are investigating how the interplay of several mechanisms — surface charge regulation, advection, and more — varies the electrical conductance of charged nanochannels.”

Green’s team aims to extend their findings from the winning paper to multichannel systems, where they plan to demonstrate once more that the electroneutrality breakdown does not occur.

“I am deeply honored to have my work acknowledged with this award,” said Green. “I hope it will reach a broader audience and impact communities and fields I do not usually interact with.”

About The Journal of Chemical Physics

The Journal of Chemical Physics is an international journal that publishes cutting edge research in all areas of modern physical chemistry and chemical physics.