Ivan Sutherland, the ‘father of computer graphics,’ wins the Frontiers of Knowledge Award

The BBVA Foundation Frontiers of Knowledge Award in the Information and Communication Technologies category has gone in this eleventh edition to American computer engineer Ivan Sutherland, for his pioneering work in computer graphics and virtual reality 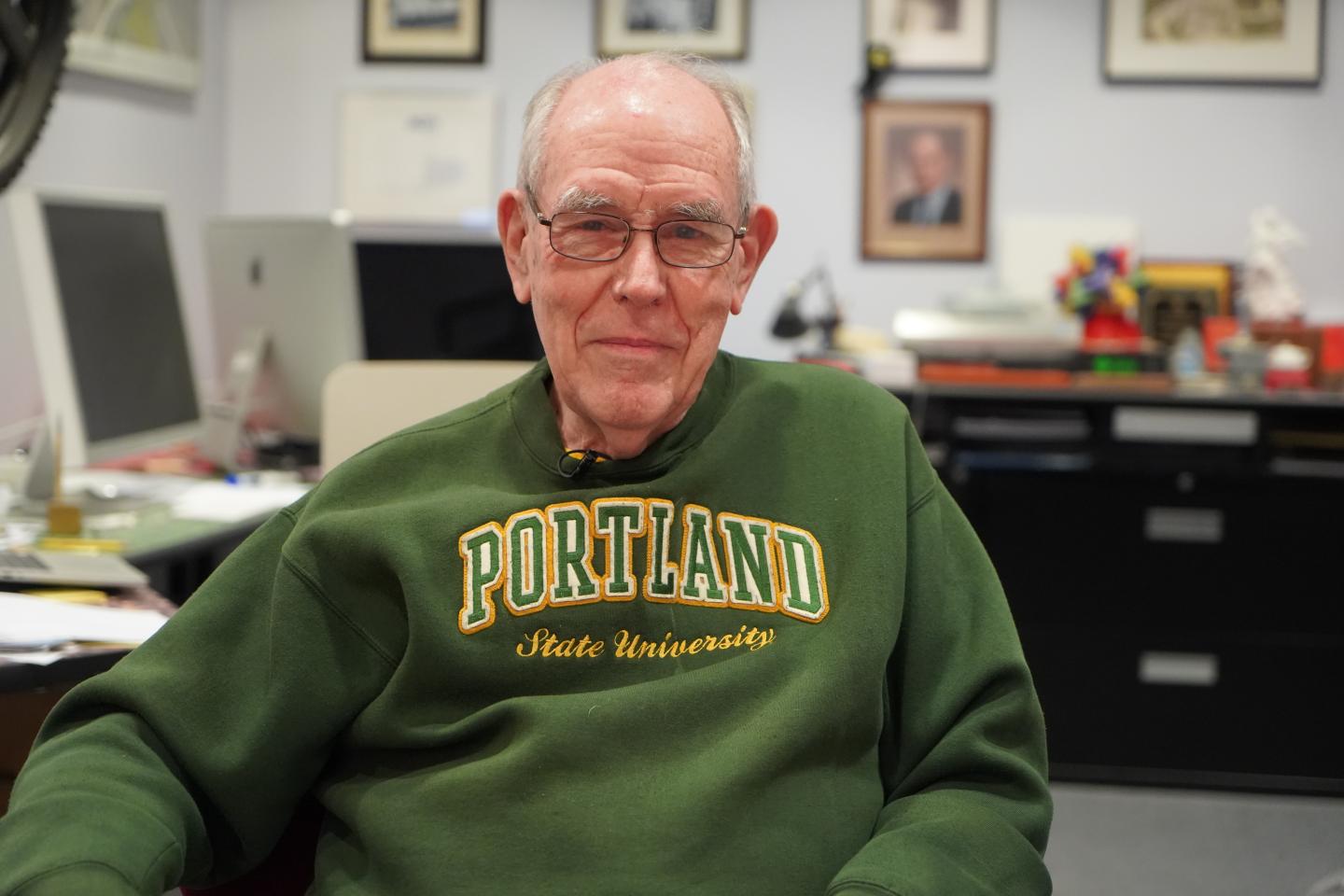 The BBVA Foundation Frontiers of Knowledge Award in the Information and Communication Technologies category has gone in this eleventh edition to American computer engineer Ivan Sutherland, for “pioneering the move from text-based to graphical computer displays,” in the words of the citation. Almost sixty years ago, at a time when computers took up an entire room, Sutherland not only invented the first system supporting graphical interaction with these machines, he also developed the first virtual reality headset, which he nicknamed the “Sword of Damocles.”

In a career spanning more than six decades, Sutherland has paired “a deep knowledge of technology with an understanding of human behavior to transform computer interaction,” the citation continues. Nowadays, “everybody using a computer or smartphone benefits from his vision and contributions.”

Sutherland gave notice of his visionary talent with his doctoral thesis, presented at the Massachusetts Institute of Technology (MIT) in 1963 under the supervision of Claude Shannon, the “father” of information theory. It described the Sketchpad program, which showed that computer graphics could provide a more natural interaction between user and machine, and is generally regarded as the predecessor of the graphical interfaces we know today, from the windows system begun by Apple to the icons of our smartphone apps. It is in honor of these achievements that the committee describes him as “the father of computer graphics.”

At a time when punch cards were the norm, the ideas behind Sketchpad were “revolutionary,” says the awards committee. The program “laid the foundations for intuitive and powerful human-computer interaction through drawing and manipulating shapes and icons rather than through typing commands. Sketchpad provided a light pen and commands to draw directly on a computer display, to zoom in and out, and to transform objects.”

In conversation yesterday after hearing of the award, Sutherland gave thanks to Wesley Clark, builder of “what was then the world’s biggest computer, the TX-2” for letting him use it “for hours at a time” to develop Sketchpad. “Being able to draw on a computer screen was totally unusual and unexpected, and awakened a lot of people to the possibility of using computer graphics,” the new laureate remarked.

Asked if he could imagine then the kind of applications his work would inspire, Sutherland admitted he had “no idea what it would lead to. I did it because it was interesting to do. I was given access to a computer. I wanted to make drawings on that computer, because I liked drawings, and I liked to make them neat, and the computer delivered that. I did what I did because each step was interesting and technically possible, and clearly gave us access to information in a new way that would obviously be useful, even if how it would be used was not clear.”

A few years later, as a professor at Harvard University, Sutherland created the first virtual reality headset “with potential to track the user’s gaze,” the committee explains. This device, which he built with his students in 1968, was nicknamed “The Sword of Damocles” due to its weight, and is referred to in the citation as the precursor of “today’s virtual and augmented reality systems such as HoloLens, Rift and Vive.”

In the original paper describing the device, Sutherland explained that his goal was “to surround the user with three-dimensional information,” an image that “must change in exactly the way that the image of a real object would” when the observer moves their head. The objects projected “appear to hang in the space all around the user,” writes Sutherland, for whom “the biggest surprise” was the enthusiastic response of the device’s initial public and the “realism” of its images. He ends the report confessing that at the outset he had “no idea how much effort would be involved.”

As with Sketchpad, Sutherland had no inkling of the world that virtual reality would open up. Nor is he willing now to hazard predictions about its future uses: “If you want to know the future, you have to ask the people who make it not the people who started it. I have no idea what other people will do.”

Sutherland’s influence has spanned academia and industry. Not only does he himself hold over 60 patents, but a number of his students have gone on to found some of the sector’s most thriving companies.

In 1968 he moved to the University of Utah, where he incorporated Evans & Sutherland, a firm that pioneered the development of 3D graphics hardware, and was accompanied by “brilliant students,” he remarked yesterday. “Their excellence enabled several of them to be involved in entrepreneurial companies, some of which did marvelous things. For instance, Edwin Catmull started Pixar, which makes very entertaining films. And John Warnock was one of the founders of Adobe. I am pleased to have known those people and made some small contribution to their education.”

His next academic appointment, in the 1970s, was at the California Institute of Technology, where he worked closely with Carver Mead, winner of the Frontiers of Knowledge Award in the fourth edition. Sutherland’s name was put forward for the award by another Frontiers laureate, Leonard Kleinrock, honored in the seventh edition.

The latest awardee makes just one assertion about the future; that it will depend entirely on the next generation’s spirit of inquiry: “Young people are wonderful. They don’t know what they can’t do, so they go ahead and do it.”

His research and teaching career began at the University of Maryland, followed by appointments at Harvard and Utah universities, Caltech (where he set up the Department of Computer Science), Carnegie Mellon University, Imperial College London, the University of California, Berkeley, and Portland State University, where he is currently a Visiting Scientist.

He has founded a number of companies, including Evans & Sutherland Computer Corporation, Picture Design Group and Sutherland, Sproull & Associates, the latter acquired by Sun Microsystems to form Sun Microsystems Laboratory, where Sutherland would remain for several years as Vice President and Sun Fellow (the firm’s most senior technical post).

An intensive research enterprise in both the university and corporate sectors has earned him numerous patents; the first in 1956, when he was just 21 years old, followed by another seventy-four.

He combines his post at Portland State University with consulting work for the U.S. Government and firms like Oracle Laboratory and ForrestHunt

The rigor, quality and independence of the judging process have earned these awards the attention of the international scientific community and a firm place among the world’s foremost prize families.

The BBVA Foundation is aided in the evaluation process by the Spanish National Research Council (CSIC), the country’s premier public research organization. The Foundation and CSIC jointly appoint the evaluation support panels charged with undertaking an initial assessment of the candidates proposed by institutions across the world and drawing up a reasoned shortlist for the consideration of the award committees. CSIC is also responsible for designating each committee chair.

About the BBVA Foundation Frontiers of Knowledge Awards

The BBVA Foundation centers its activity on the promotion of world-class scientific research and cultural creation, and the encouragement of talent.

The BBVA Foundation Frontiers of Knowledge Awards, established in 2008, recognize and reward contributions of singular impact in science, art and the humanities, privileging achievements that significantly expand the frontiers of the known world, open up new fields, or emerge from the interaction of various disciplinary areas. Their eight categories are congruent with the knowledge map of the 21st century, ranging from basic sciences to key challenges for the natural environment by way of domains at the crossroads of disciplines – Biology and Medicine; Economics, Finance and Management – or the supremely creative realms of music and the opera.