It’s a dirty job, but some catalyst has got to do it

Catalysts are tricky things, but without them, our world would be a lot dirtier. 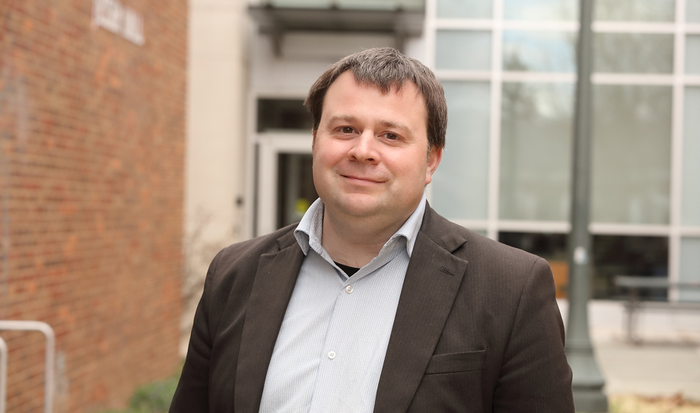 Catalysts are tricky things, but without them, our world would be a lot dirtier.

Catalysts – materials that accelerate chemical reactions – are used to save energy, reduce waste and control pollution in everything from manufacturing household cleaners to making car emissions less toxic.

It’s a tough life, though. These materials operate in hostile environments that can degrade their ability to work efficiently, or stop them from functioning all. That’s what makes them tricky.

“A primary bottleneck in many applications has been stability of the catalyst,” said Chris Paolucci, an assistant professor of chemical engineering at the University of Virginia School of Engineering and Applied Science. “Let’s say I synthesize something perfectly. I make the material the exact way I want it, but when I start running my chemical reaction that I’m interested in, everything changes. I end up getting something I didn’t start with, and I don’t really understand why that is.”

Paolucci recently received a National Science Foundation CAREER Award to help figure out what happens to catalytic materials during reaction, down to their nanoparticles, atoms and ions. This understanding is the key to designing longer-lasting, efficient catalysts that work in a variety of conditions.

The CAREER program, one of the NSF’s most prestigious awards for early-career faculty, recognizes the recipient’s potential for leadership in research and education. A portion of Paolucci’s five-year, $597,273 grant will cover the cost of computing time on Rivanna, UVA’s high-performance computing system.

Paolucci’s lab specializes in computer simulations of chemical reactions, including computational catalysis, an area of study that applies quantum mechanics-based calculations to examine how a known catalyst accelerates chemical reactions at the atomic and molecular level, and to build models to predict the performance of potential new catalysts.

Paolucci’s CAREER Award project, “Cation and Nanoparticle Interconversion in Metal-Exchanged Zeolites,” focuses on a widely used class of catalysts that can be designed using any of more than 250 varieties of synthesized zeolites, honeycomb-like mineral frameworks with nano-sized pores. The zeolite structures support metal nanoparticles or positively charged atoms or molecules called cations. The metals provide the “active sites” where reactions occur.

These materials are good at promoting desired reactions, while efficiently using small amounts of expensive metals such as platinum or palladium. Paolucci’s team, led by Ph.D. student Keka Mandal, is looking specifically at catalysts made with those two metals in nanoparticle and cation form.

One complication is that, through a process called interconversion, the conditions in which a catalyst is being used can lead cations to agglomerate, forming metal particles, or, conversely, cause particles to separate into cations. When that happens, the catalyst “deactivates.” The researchers seek to know why, and how to reverse the process to reactivate the material.

To get there, Paolucci’s team will combine quantum mechanical theory – the area of physics dealing with nature’s smallest units of matter – chemical engineering knowhow and computing power. Mandal has logged millions of computing hours on UVA’s supercomputer.

“We work with experimental collaborators on this project, but these interconversions may take 48 hours or longer,” Paolucci said. “To synthesize the zeolite structure and then run an experiment to characterize it can take a long time.”

Instead, his team determines the thermodynamic and kinetic properties of the material using quantum chemical molecular simulations and mathematical modeling.

“That gives us all sorts of different properties for a given molecular system, like energies and forces. Then we use those parameters to build macroscopic models.”

For instance, how much energy does a metal cation have at a given temperature or under a certain pressure – meaning how strongly would that cation bind to a surface under those conditions?

“We work with tools developed by the physics community, but we marry those with core chemical engineering concepts to create computer models that describe the intrinsic thermodynamics and kinetics of a given system. Is the material stable, and if not, how fast do we think it would deactivate or how fast can we make it stable again?”

To help validate and refine the models, Paolucci is collaborating with UVA professor and chair of chemical engineering William Epling’s environmental catalysis lab and professor Rajamani Gounder’s lab at Purdue University. He knows Gounder from his student days at Notre Dame, where Paolucci completed his bachelor’s and Ph.D. degrees in chemical engineering.

“To use computation to predict things like reactions and activation energies, I mean we learned about them in the undergrad curriculum, but to actually be able to visualize those things and compute them, I found really fascinating,” said Paolucci, who brought that enthusiasm to UVA, and not just through research. He also developed and taught a new Data Science in Chemical Engineering course.

“But models are an abstraction of reality,” he said. “You’re trying to get as close as you can to the real system, and you can get a lot closer when people are doing fundamental research from the experimental side. I saw a lot of that going on in our field and really appreciated that.”

Together, the experimentalists and modelers can home in on the most important physical parameters, Paolucci said. “At the end of the day, I’m a chemical engineer. Our research is driven by important engineering applications.”

When Paolucci arrived at UVA in 2018, he joined two experimentalists known well in industry and academia for their heterogeneous catalysis research – Epling and Robert J. Davis, the William Stansfield Calcott Professor of Engineering and Applied Science in chemical engineering. Paolucci and his students collaborate on multiple projects with the Epling and Davis labs, and the three groups gather weekly to discuss their work.

The goal of one collaboration with Epling’s lab is to improve systems that treat diesel engine exhaust from the semi trucks we rely on to haul goods around the country.

Copper catalysts are widely used in these systems, and do a good job converting exhaust gases to cleaner emissions – such as transforming nitrogen oxides, a family of harmful pollutants, to plain nitrogen – before they leave the tailpipe. But right now, the catalyst only works to convert nitrogen oxides after heating to a minimum temperature.

“We are looking at the functionality of materials to adsorb nitrogen oxides at low temperatures, because while the engine is cold, nitrogen oxide is escaping,” Mandal said. “If we had a material that could trap the nitrogen oxide when the engine has just started, and then desorb once the aftertreatment system activates, it could solve the cold-start problem.”

Epling and other researchers have been working on the challenge for some time.

“For labs like mine, research like Chris’ changes everything,” Epling said. “Basically, we run gases through a reactor using lab-made and industry-provided catalysts and measure what comes out. Sounds simple, but there are so many zeolite-metal combinations, reaction conditions, etc., that we cannot explore all the relevant possibilities through experiments alone.

“Chris’ work in thermodynamics and kinetics modeling is cutting edge. I expected a CAREER Award would come. But I am also excited that his research and expertise in teaching data science methods exposes our students to computational modeling in engineering, which I believe will soon be part of every engineering discipline curriculum. Chris is helping us get ahead of the curve.”

Through the CAREER project’s educational outreach component, Paolucci hopes not only to introduce students to computational and molecular modeling, but to address the retention of people who choose careers in engineering fields involving coding, especially among people from backgrounds traditionally underrepresented in engineering and science. Already, he has organized career panels of recent alumni for his graduate and undergraduate students, so they can learn about options in industry and academia and begin networking.

Paolucci also wants to address the imbalance of women and men in engineering, especially in computation. In his own group, four of his six Ph.D. advisees are women, as are a number of undergraduate students in his lab.

That gave him the idea to coordinate with Girls Who Code clubs.

“I want to take advantage of the fact that my group has a lot of women who are doing excellent research and get them involved with Girls Who Code participants early in the K-12 STEM pipeline, as well as students in UVA’s undergraduate chapter,” Paolucci said.

“A lot of times, young people especially are looking for role models. Having women from my group who are Ph.D. students be engaged in activities with K through 12 students gives them a vision of, ‘Hey, here’s something I could do.’”