It takes some heat to form ice! 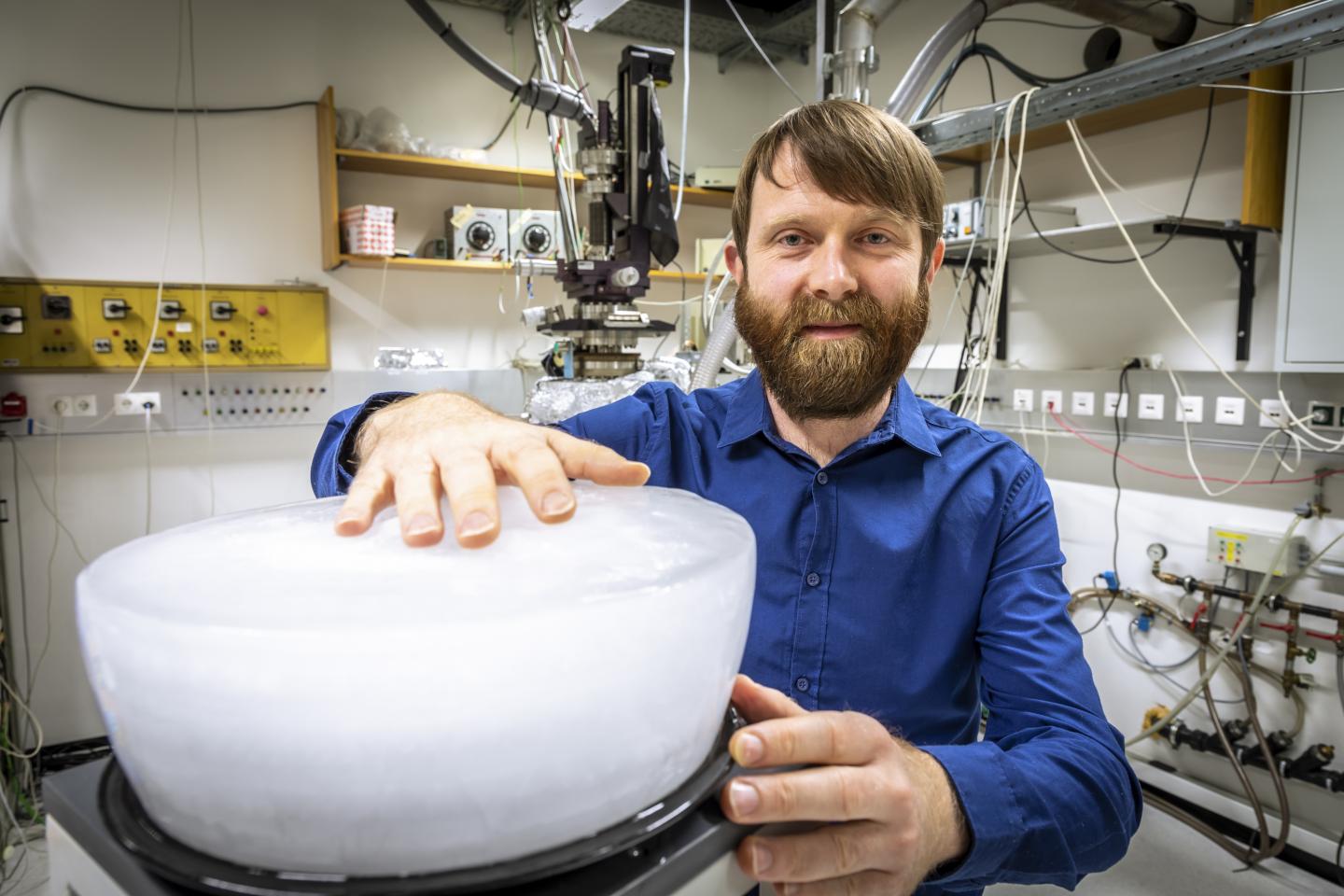 Water freezes and turns to ice when brought in contact with a cold surface – a well-known fact. However, the exact process and its microscopic details remained elusive up to know. Anton Tamtögl from the Institute of Experimental Physics at TU Graz explains: “The first step in ice formation is called ‘nucleation’ and happens in an incredibly short length of time, a fraction of a billionth of a second, when highly mobile individual water molecules ‘find each other’ and coalesce.” Conventional microscopes are far too slow to follow the motion of water molecules and so it is impossible to use them to ‘watch’ how molecules combine on top of solid surfaces.

With the help of a new experimental technique and computational simulations, Tamtögl and a group of researchers from the Universities of Cambridge and Surrey were able to track down the first step in ice formation on a graphene surface. In a paper published in Nature Communications, they made the remarkable observation that the water molecules repel each other and need to gain sufficient energy to overcome that repulsion before ice can start to form: It has to become hot, so to speak, before ice forms.

Talking in the general sense, the lead author Anton Tamtögl says “repulsion between water molecules has simply not been considered during ice nucleation – this work will change all that”.

Following the ‘dance’ of water molecules

The effect was discovered with a method called Helium Spin-Echo (HeSE) – a technique developed at the Cavendish Laboratory in Cambridge and specially designed to follow the motion of atoms and molecules. The machine scatters helium from moving molecules on a surface, similar to the way radio waves scatter from vehicles in a radar speed-trap. By registering the number of scattered helium and their energy / velocity after scattering, it allows to follow the movement of atoms and molecules.

The HeSE experiments show that water molecules on a graphene surface, i.e. a single atomic layer of carbon, repel each other. The repulsion arises due to the same alignment of the molecules, perpendicular to the surface. The scenario is analogous to bringing two magnets with like-poles together: They will push themselves apart. In order for the nucleation of ice to begin, one of the two molecules must reorient itself, only then can they approach each other. Such a reorientation requires additional energy and thus represents a barrier that must be overcome for the growth of ice crystals.

Computational simulations in which the precise energy of water molecules in different configurations was mapped and the interactions between molecules near to each other were calculated, confirm the experimental findings. Moreover, simulations allow to ‘switch’ the repulsion on and off, providing thus further proof of the effect. The combination of experimental and theoretical methods allowed the international scientific team to unravel the behaviour of the water molecules. It captures for the first time, exactly how the first step of ice formation at a surface evolves and allowed them to propose a previously unknown physical mechanism.

Relevance for other fields and applications

The group further suggests the newly observed effect may occur more widely, on other surfaces. “Our findings pave the way for new strategies to control ice formation or prevent icing,” says Tamtögl, thinking, for example, of surface treatments specifically for wind power, aviation or telecommunications.

Understanding the microscopic processes at work during ice formation, is also essential to predicting the formation and melting of ice, from individual crystals to glaciers and ice sheets. The latter is crucial to our ability to quantify environmental transformation in connection with climate change and global warming.

This research area is anchored in the Field of Expertise ‘Advanced Materials Science’, one of five research foci of TU Graz.