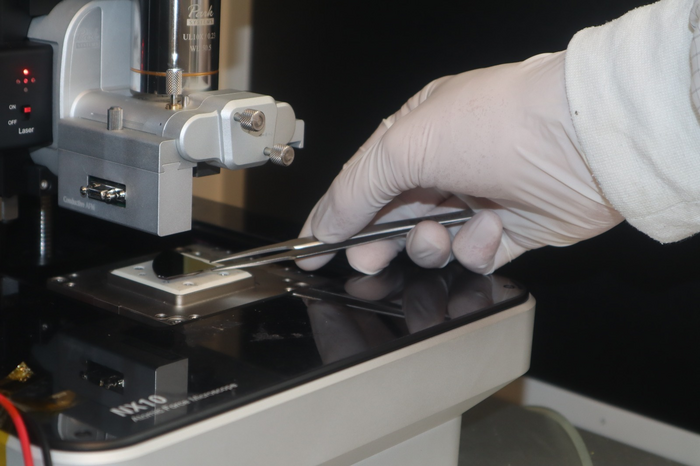 Dr. Moshe Ben Shalom, head of the Quantum Layered Matter Group, says: “We are fascinated by how the atoms in a condensed matter order, how electrons choose to mix between the atoms and if or how external stimulus can manipulate the atomic order and the electric charge distribution.

Answering these questions is challenging due to the enormous number of atoms and electrons, even in the tiniest devices of our most advanced technologies. One of the tricks is to study crystals, which contain much smaller units, each including only a few atoms and electrons. While crystals are made of many identical units, repeated periodically in space, their properties are entirely deduced from the one unit-cell symmetry and the details of the few atoms it captures. And still, it is challenging to understand and predict these details since the electrons spread over all the atoms simultaneously as determined by their joint quantum mechanical interactions”.

One way to probe the atomic order and the electronic charge distribution is to break the symmetry of the cells to induce internal electric fields. Crystals with permanent internal electric fields are called polar crystals. In 2020 the same lab at TAU reported a novel polar crystal by stacking together two layers of a van der Waals crystal, with each layer only one atom thick.

The natural order in which Dr. Ben Shalom. recaps: “these crystals grow is symmetric, with each successive layer rotated by 180 degrees compared to the previous one. Here one type of atoms is positioned precisely above the other type. Conversely, the artificial crystals assembled in the lab are not rotated, resulting in a slight shift between the layers, thus straying away from the fully symmetric configurations. This non-symmetric crystal structure forces electrons to jump from one layer to another, forming a permanent electric field between them. Crucially, the group found that applying external electric fields makes the layers slide back and forth to match the direction of the electron’s jump with the external field orientation. They named the phenomena “interfacial ferroelectricity” and pointed out the unique domain-wall motion that governs the “Slide-Tronics” response.”

Dr. Ben Shalom elaborates: “The ferroelectric response we discovered is in a two-atoms thick system, the thinnest possible, and hence is highly appealing for information technologies which are based on electronic quantum tunneling. We are now developing such tunneling devices in a stealth phase company called Slide-Tro LTD, established with the University and an external investor. We believe that a wide slew of devices from low power electronics to robust non-volatile memories are feasible with this technology. From a fundamental science perspective, the discovery pointed us to new questions: How does the electric charge order? And how does the electric potential grow if we stack additional layers to further break or restore the symmetry of the crystals? In other words, instead of thinning down crystals as was vastly explored to date, we could now assemble new polar crystals, layer by layer, and probe the electric potential at any step of the crystalline ladder”.

In the experiment, the researchers compared adjacent few layers thick domains with different back / forward shifts between the various layers, resulting in different polarization orientations. For example, in four layers (with three polar interfaces), there are four allowed configurations: all pointing up ↑↑↑, one down and two up ↑↑↓, two down and one up ↑↓↓, and all down ↓↓↓.

“We were excited to find a ladder of distinct electric potentials which are separated by nearly even steps, such that each step can be used as an independent information unit,” says Noam Rab, a student conducting the measurements. “This is very different from any polar thin film known to date, where the polarization magnitude is very sensitive to many surface effects and where the polar orientation switches at once between two potentials only”. Furthermore, emphasizes Dr. Swarup Deb, a leading author of the paper: “we found that the internal electric fields remain substantial even if we add external electrons to the system to make it both conductive and polar. Typically, the external charge screens off the internal polarization, but in the present interfacial ferroelectrics, the extra electrons could only flow along the layers without jumping between them too much, to mute down the out-of-plane electric field”. Dr. Wei Cao, one of the other leading authors adds: “With the help of theoretical calculations based on quantum mechanical principles, we identified the precise distribution of the polar charge and the conducting charge. The former is highly confined to the interfaces between the layers and hence protected from external perturbations.

The calculations allowed us to predict which crystals are best resilient to the extra charge and how to design even better Ladder-Ferroelectrics”. “The most likely directions of a future research that we see ahead is manipulating more electronic orders like magnetism and superconductivity by sliding different crystal symmetries to form novel Ladder-Multiferroics”.