Researcher at the University of Bonn investigates bones from the 1,400-year-old Maya mass grave of Uxul 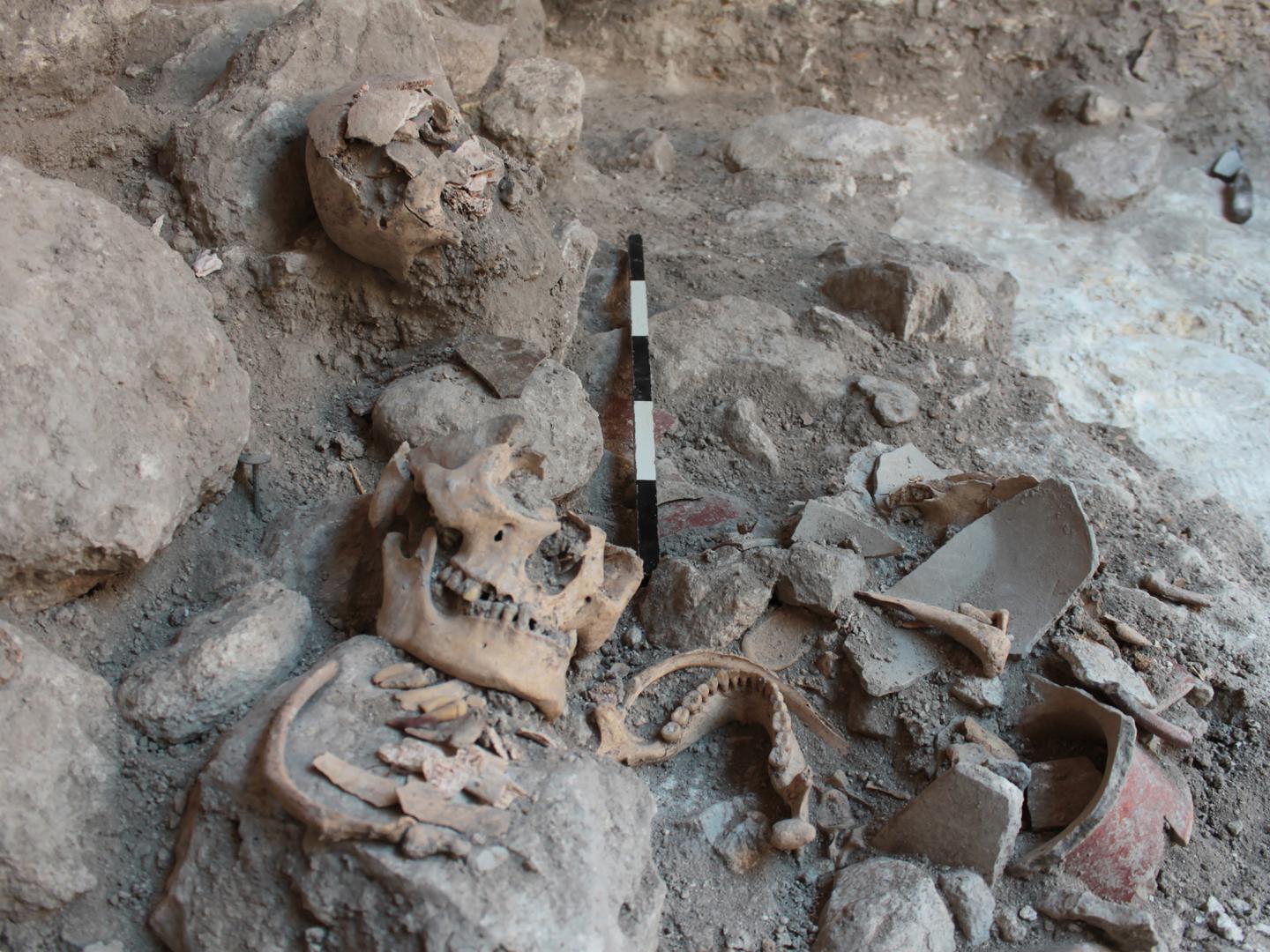 Several years ago, Maya archaeologists from the University of Bonn found the bones of about 20 people at the bottom of a water reservoir in the former Maya city of Uxul, in what is now Mexico. They had apparently been killed and dismembered about 1,400 years ago. Did these victims come from Uxul or other regions of the Maya Area? Dr. Nicolaus Seefeld, who heads the project that is funded by the Gerda Henkel Foundation at the University of Bonn, is now one step further: A strontium isotope analysis by the National Autonomous University of Mexico (UNAM) showed that some of the dead grew up at least 95 miles (150 kilometers) from Uxul.

Strontium is ingested with food and stored like calcium in bones and teeth. The isotope ratios of strontium vary in rocks and soils, which is why different regions on earth have their own characteristic signatures. “As the development of tooth enamel is completed in early childhood, the strontium isotope ratio indicates the region where a person grew up,” says Dr. Nicolaus Seefeld, who heads a project at the University of Bonn on the mass grave of Uxul and the role of ritualized violence in Maya society.

Together with researchers from the Isotope Geochemistry Laboratory of the Geophysics Institute at the National Autonomous University of Mexico (UNAM), Seefeld took tiny samples of tooth enamel from a total of 13 individuals early this summer. “Unfortunately it was not possible to examine the strontium isotope ratio of the remaining individuals, because the teeth were too decayed and the result would have been distorted,” reports Seefeld.

The victims apparently had a high social status

The results of the isotope analysis show that most of the victims grew up at least 95 miles (150 kilometers) from Uxul in the southern lowlands, in what is now Guatemala. “However, at least one adult and also one infant were local residents from Uxul,” says the researcher. They were apparently mostly people of high social status, as eight of the individuals had elaborate jade tooth jewelry or engravings in their incisors.

In 2013, Seefeld was investigating the water supply system of the former Maya city of Uxul when he discovered a well, in which the remains of about 20 people had been buried during the seventh century AD. The excavations of this mass grave were carried out as part of the Uxul archaeological project by the Department for the Anthropology of the Americas at the University of Bonn, which was headed by Prof. Dr. Nikolai Grube during the research period from 2009 to 2015. The investigations of the mass grave have been under the leadership of Dr. Seefeld and funded by the Gerda Henkel Foundation since January 2018.

Detailed investigations revealed that, in addition to at least 14 men and one woman, the mass grave contained the remains of several adolescents and an 18-month-old infant. Nearly all the bones showed marks of cuts and injuries by stone blades. Their regular distribution clearly shows that the individuals had been systematically and deliberately dismembered. The victims were killed and decapitated outside the water reservoir, then dismembered and the body parts placed at the bottom of the reservoir.

Heat marks on the bones showed that the bodies were exposed to fire – presumably so that skin and muscles could be removed more easily. However, there were no human bite marks on the bones that would indicate cannibalism. After dismemberment, body parts that were originally connected were deliberately placed as far apart from each other as possible. “This clearly demonstrates the desire to destroy the physical unity of the individuals,” says Seefeld.

Killing and dismemberment as a demonstration of power

The latest results of the strontium isotope analysis and the anthropological investigations now allow more precise conclusions about the identity of the victims and the possible reasons for the killings. It is known from pictorial representations of ritual violence of the Classic Maya that the beheading and dismemberment of humans mostly occurred in the context of armed conflicts. These representations often show victorious rulers who chose to take the elites of the defeated city as prisoners of war and later publicly humiliate and kill them. “The documented actions in Uxul should therefore not be regarded as a mere expression of cruelty or brutality, but as a demonstration of power,” says Seefeld.

The most plausible explanation for the current evidence is that the majority of the victims were prisoners of war from a city in the southern Maya lowlands, who were defeated in a military confrontation with Uxul. These formerly powerful individuals were then brought to Uxul and killed. Seefeld recently presented his findings at the Archaeological Conference of Central Germany in Halle and at the conference “Investigadores de la Cultura Maya” in Campeche in Mexico.