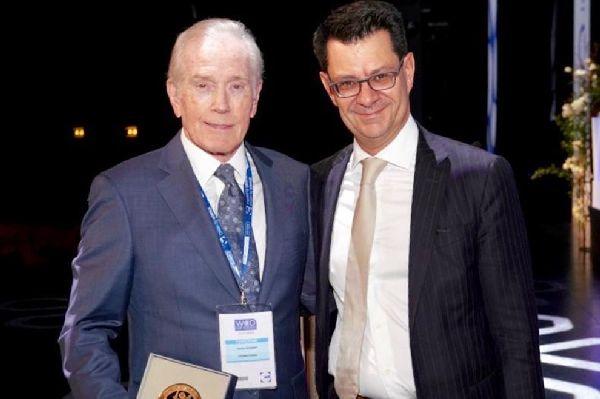 Harry K. Genant, MD, Professor Emeritus of the University of California San Francisco, and Chairman Emeritus of the Board of Directors of Synarc, Inc., has been awarded the prestigious 2019 International Osteoporosis Foundation (IOF) Medal of Achievement.

Presented on April 6, 2019 at the World Congress on Osteoporosis, Osteoarthritis and Musculoskeletal Diseases in Paris, France, the IOF Medal of Achievement is given in honour of an individual researcher who has significantly advanced the field of osteoporosis through original and outstanding scientific contributions. The award underlines important aspects of IOF’s mission – to increase understanding and awareness of osteoporosis and to promote medical innovation and improved care.

As presenter of the Award, Professor Serge Ferrari, Chair of the IOF Committee of Scientific Advisors, stated:

“It is an honour to present this prestigious award to Harry Genant, who is internationally renowned for his ground-breaking research in non-invasive and quantitative imaging methods for osteoporosis, arthritis and orthopaedics. His influential work in the field has made significant contributions to a better understanding of the determinants of bone fragility and to the evaluation of patients at risk of osteoporotic fractures and their response to therapy.”

Harry K. Genant, MD, is Professor Emeritus of the University of California San Francisco, and Chairman Emeritus of the Board of Directors of Synarc, Inc. He received his medical degree from Northwestern University in Chicago, Illinois, completed his internship on the Osler Service at Johns Hopkins University in Baltimore, Maryland, and received residency training in Medicine and in Radiology at the University of Chicago, and was Chief Resident and Assistant Professor in Radiology. In 1974 he joined the faculty of the University of California, San Francisco, as Chief of Musculoskeletal Radiology. He remained at UCSF for over 30 years, becoming Professor of Radiology, Medicine, Epidemiology and Orthopaedic Surgery. He founded the Osteoporosis and Arthritis Research Group (OARG) in the Department of Radiology, UCSF, and served as its Executive Director. This group, once numbering over 130 physicians, scientists and research associates, was recognized as a leading source of research on the development and assessment of noninvasive and quantitative imaging methods for osteoporosis, arthritis and orthopaedics. In 1998 he co-founded Synarc, Inc, a global, contract research organization (CRO) specializing in management of quantitative imaging and biomarkers in large, multicenter, multinational, pharmaceutical drug trials. He served as a Member of the Board of Directors from 1998 to 2013, and is currently a Senior Consultant for Synarc/ BioClinica.

Dr. Genant has been editor or co-editor of more than 40 books and author or co-author of more than 300 chapters or invited articles, over 600 articles in peer-reviewed scientific and medical journals, and over 1500 abstracts presented at national and international scientific and professional gatherings. He is past Associate Editor of Bone, and Current Associate Editor of Journal of Orthopaedic Translation, and is current Editorial Board Member of Osteoporosis International and the Journal of Clinical Densitometry.

Among the numerous awards and honors Dr. Genant has received are honorary lifetime memberships for the American Academy of Orthopaedic Surgeons and for the International Society for the Study of the Lumbar Spine. He is an honorary member of the Italian Radiolologic Society, the Chinese Osteoporosis Society, the Chilean Society of Osteology, the Hungarian Society of Osteology, and the European Society of Skeletal Radiology. He is a Fellow of the American College of Radiology and an Honorary Fellow of the Royal College of Radiologists, United Kingdom. He was named The Outstanding Physician of the Year in 1998 and the recipient of The Paul D. Miller ISCD Service Award in 2013, by the International Society for Clinical Densitometry. He was designated The Annual Orator in 2004, by the Radiologic Society of North America, and The Louis Avioli Annual Lecturer in 2012, by the American Society of Bone and Mineral Disease. He was elected by the American College of Rheumatology as an ACR Master in 2012, and was named the IOF Olof Johnell Science Awardee in 2013.

Held jointly by IOF and ESCEO, the Congress took place in Paris, France, from April 4-7, 2019. WCO-IOF-ESCEO is the world’s largest annual forum for the presentation of clinical research and new advances in the prevention and management of bone, muscle and joint disorders, including sarcopenia and frailty. For complete information and abstracts visit http://www.wco-iof-esceo.org #OsteoCongress

The International Osteoporosis Foundation (IOF) is the world’s largest nongovernmental organization dedicated to the prevention, diagnosis and treatment of osteoporosis and related musculoskeletal diseases. IOF members, including committees of scientific researchers as well as 240 patient, medical and research societies in 99 locations, work together to make fracture prevention and healthy mobility a worldwide heath care priority. http://www.iofbonehealth.org
http://www.facebook.com/ @iofbonehealth

The European Society for Clinical and Economic Aspects of Osteoporosis and Osteoarthritis (ESCEO) is a non-profit organization, dedicated to a close interaction between clinical scientists dealing with rheumatic disorders, pharmaceutical industry developing new compounds in this field, regulators responsible for the registration of such drugs and health policy makers, to integrate the management of osteoporosis and osteoarthritis within the comprehensive perspective of health resources utilization. The objective of ESCEO is to provide practitioners with the latest clinical and economic information, allowing them to organize their daily practice, in an evidence-based medicine perspective, with a cost-conscious perception. http://www.esceo.org