Introducing a protocol for using robotic pets in memory care

You might think it was a typical therapy session at a long-term care facility. In a quiet room, a therapist sets down a pet carrier, brings out a cat, and sets it on a resident’s lap. As the resident gently strokes the cat’s fur, it purrs, and the therapist asks the resident questions about their childhood pets, accessing long-ago memories. 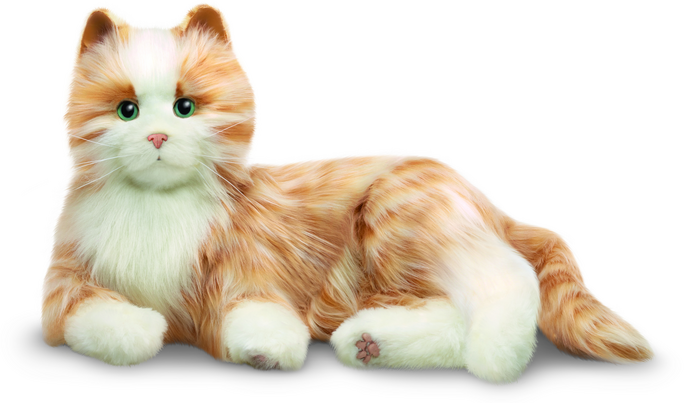 Credit: Photo and video assets should be credited to Joy for All Companion Pets/ Ageless Innovation.

You might think it was a typical therapy session at a long-term care facility. In a quiet room, a therapist sets down a pet carrier, brings out a cat, and sets it on a resident’s lap. As the resident gently strokes the cat’s fur, it purrs, and the therapist asks the resident questions about their childhood pets, accessing long-ago memories.

The resident’s enjoyment of the session and the benefit for their well-being is real. But the animal is not. It’s a robotic pet with synthetic fur and programmed movements and sounds. But researchers are finding that robotic pets can be useful in therapy, without some of the disadvantages and unpredictability of real animals.

In a paper published in the Canadian Journal of Recreation Therapy, University of Utah researcher Rhonda Nelson and graduate student Rebecca Westenskow developed a protocol for using robotic pets with older adults with dementia. The protocol uses a low-cost robotic pet, establishes ideal session lengths, and identifies common participant responses to the pets to aid in future research.

“Our protocol had questions like: Would you like to scratch the dog behind his ears? Would you like to pet him? Would you like to brush him?” says Nelson, an assistant professor in the Department of Occupational and Recreational Therapies. “And then we were evaluating how people responded to those different cues so that we could then provide some guidelines to people on how to have the most beneficial actions with these animals.”

Nelson has watched the development of robotic pets for the past decade, intrigued by the potential to use them therapeutically in long-term and geriatric care settings. But until recently the price was prohibitive. “Having been a therapist myself and training our students to work as therapists, I’m very aware that most facilities would never be able to purchase them.”

But with the introduction of Ageless Innovation‘s Joy For All Companion pets in 2015, priced at under $150, widespread use of robotic pets as therapy “animals” seemed within reach. Robotic pets can get around many of the risks and drawbacks of live animals in long-term care settings. Many facilities don’t allow personal pets because of allergies, the potential for bites or scratches and other reasons.

Researchers have already begun to study how people with dementia interact with robotic pets, Nelson notes, but haven’t yet developed a unified protocol to give, say, assisted living staff a plan to gain the most benefit from the pets’ use through directed interaction.

“There was very little information on what people were doing with the pets,” Nelson says. “So without that guidance, it’s just a toy. And what do you do with it?”

Prior to the COVID-19 pandemic, the researchers met with five people between 82 and 87 years old living in long-term care facilities who experienced severe cognitive impairment. In two sessions of 30 minutes each, the researchers brought out either a robotic dog or a cat (participants’ choice) in a pet carrier.

“Many participants leaned toward the [robotic pet] as it was taken out of the pet carrier,” the researchers noted, “then instinctively reached for it and began petting, rubbing or scratching the pet when first introduced.”

Throughout the session, the researchers asked questions, both about the participants’ experiences with past pets and about interacting with the current robotic pet. “Did they have dogs or cats?” Nelson says, giving examples of typical questions. “What were their names? Did they keep them indoors or outdoors? What types of food did they eat?”

In one case, though, the session proceeded in silence. The participant had difficulty communicating their thoughts but stayed focused on the robotic dog throughout. By the end of the session, the participant seemed to develop a connection with the robotic animal, saying “I like that dog. When he likes me.”

Nelson is often asked if the participants with cognitive decline understand that the robotic pets are not alive. In this study, she says, they all seemed aware that it was not a live animal.

“Interestingly enough one of our participants was a retired veterinarian,” she says. “So I was very intrigued to see how he would interact with it.” He chose to have both the robotic dog and cat on his lap at the same time. “We would never tell somebody that it was live if they asked. We would be honest with them. We usually introduce it as ‘Would you like to hold my dog’ and people react to it or respond to it in a way that’s meaningful for them.”

Unfortunately, data collection was cut short by the COVID-19 pandemic. But the researchers were able to draw some conclusions.

All of the participants enjoyed the activity, with several saying they liked it “very much.” One participant didn’t like the sounds the pet made, which was easily remedied by turning off the sound—not an option for a live animal.

The questions that spurred the most response related to personal reminiscences and directions for interacting with the pet.

A common, yet unprompted behavior, the researchers’ report, was communication with the pet. “Several participants used comments, sounds, specific inflections and facial expressions spontaneously with the pets,” the researchers wrote. “Some participants imitated the animal sounds made by the [pet] and repositioned the pet to look at its face or make eye contact.”

Although more research is needed to determine the optimal session length, the researchers noted that the 30-minute sessions in the study were sufficient. Nelson also hopes to explore how people with varying levels of cognitive decline respond to the pets, as well as how they can be used in a group setting.

The study found that the most meaningful interactions and the most enjoyable experiences came when the participant self-directed the session.

Why does interacting with robotic pets provide such an enjoyable experience?

“People in long-term care facilities are in a position where everybody provides care to them,” Nelson says, “and to be in the role where you are nurturing something else, or you are the caregiver I think is also psychologically very comforting for people to feel like, even though they know that it’s not live, they’re the person who’s giving love and compassion to something, and it’s responding.”