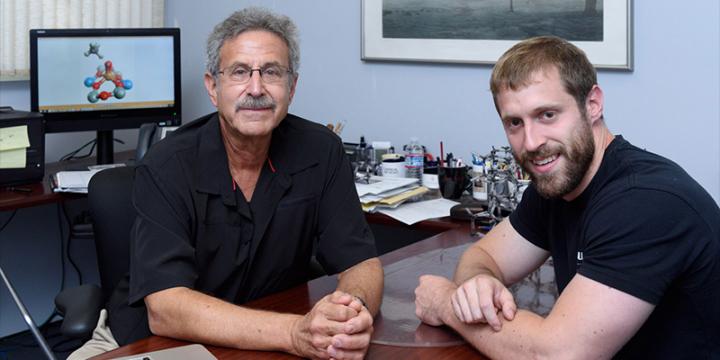 A team of researchers from Stanford University and the University of Leuven in Belgium has further elucidated an intriguing process that could be an important step toward a methanol fuel economy with abundant methane as the feedstock, an advance that could fundamentally change how the world uses natural gas.

Methanol – the simplest alcohol – is used to make various products, like paints and plastics, and as an additive to gasoline. Rich in hydrogen, methanol can drive new-age fuel cells that could yield significant environmental benefits.

If natural gas, of which methane is the primary component, could be converted economically into methanol, the resulting liquid fuel would be much more easily stored and transported than natural gas and pure hydrogen. That also would greatly reduce the emissions of methane from natural gas processing plants and pipelines. Today, escaped methane, a greenhouse gas many times more potent than carbon dioxide, nearly negates the environmental advantages of natural gas over oil and coal. The team’s new study in the current edition of Science is their latest to advance a low-energy way to produce methanol from methane.

“This process uses common crystals known as iron zeolites that are known to convert natural gas to methanol at room temperature,” explains Benjamin Snyder, who earned his doctorate at Stanford studying catalysts to address key facets of this challenge. “But, this is extremely challenging chemistry to achieve on a practical level, as methane is stubbornly chemically inert.”

When methane is infused into porous iron zeolites, methanol is rapidly produced at room temperature with no additional heat or energy required. By comparison, the conventional industrial process for making methanol from methane requires temperatures of 1000°C (1832°F) and extreme high pressure.

“That’s an economically tantalizing process, but it’s not that easy. Significant barriers prevent scaling up this process to industrial levels,” said Edward Solomon, Stanford professor of chemistry and of photon science at SLAC National Accelerator Laboratory. Solomon is the senior author of the new study.

Keeping the zeolites on

Unfortunately, most iron zeolites deactivate quickly. Unable to process more methane, the process peters out. Scientists have been keen to study ways to improve iron zeolite performance. The new study, co-authored by Hannah Rhoda, a Stanford doctoral candidate in inorganic chemistry, uses advanced spectroscopy to explore the physical structure of the most promising zeolites for methane-to-methanol production.

“A key question here is how to get the methanol out without destroying the catalyst,” Rhoda said.

Choosing two attractive iron zeolites, the team studied the physical structure of the lattices around the iron. They discovered that the reactivity varies dramatically according to the size of the pores in the surrounding crystal structure. The team refers to it as the “cage effect,” as encapsulating lattice resembles a cage.

If the pores in the cages are too big, the active site deactivates after just one reaction cycle and never reactivates again. When the pore apertures are smaller, however, they coordinate a precise molecular dance between the reactants and the iron active sites – one that directly produces methanol and regenerates the active site. Leveraging this so-called ‘cage effect,’ the team was able to reactivate 40 percent of the deactivated sites repeatedly – a significant conceptual advance toward an industrial-scale catalytic process.

“Catalytic cycling – the continual reactivation of regenerated sites – could someday lead to continual, economical methanol production from natural gas,” said Snyder, now a postdoctoral fellow at UC-Berkeley in the Department of Chemistry under Jeffrey R. Long.

This fundamental step forward in basic science will help elucidate for chemists and chemical engineers the process iron zeolites use to produce methanol at room temperature, but much work remains before such a process might be industrialized.

Next up on Snyder’s list: tackling achieving the process not only at room temperature but using ambient air rather than some other source of oxygen, such as the nitrous oxide used in these experiments. Dealing with a powerful oxidizing agent like oxygen, which is notoriously hard to control in chemical reactions, will be another considerable hurdle along the path.

For now, Snyder was both pleased and amazed by the illustrative powers of the sophisticated spectroscopic instrumentation in the Solomon labs that were leveraged for this study. These were invaluable to his understanding of the chemistry and the chemical structures involved in the methane-to-methanol process.

“It’s cool how you can get some very powerful atomic-level insight, like the cage effect, from these tools that weren’t available to previous generations of chemists,” Snyder said.