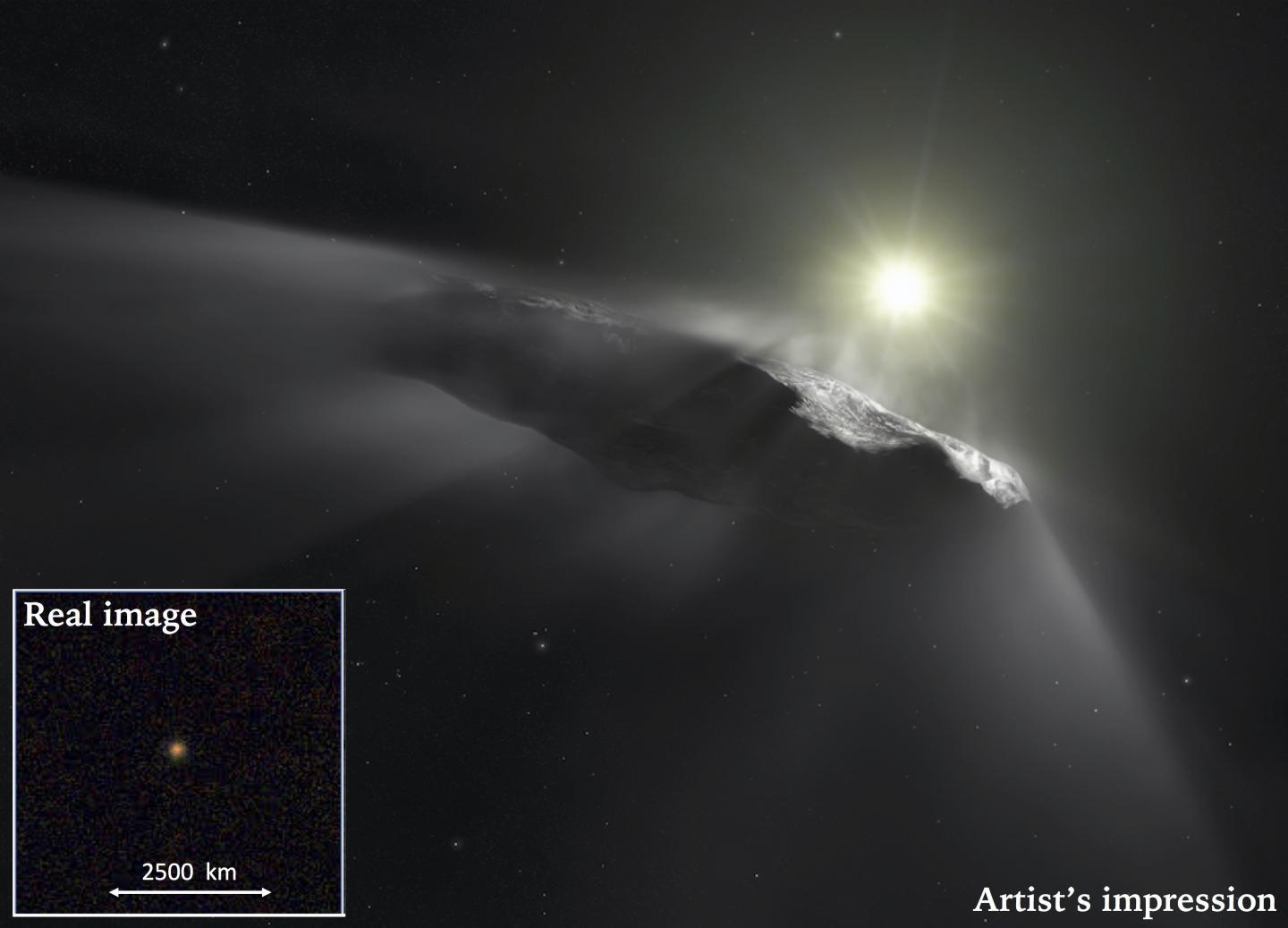 A team of international asteroid and comet experts now agree that Oumuamua, the first recorded interstellar visitor, has natural origins, despite previous speculation by some other astronomers that the object could be an alien spacecraft sent from a distant civilization to examine our star system.

A review of all the available evidence by an international team of 14 experts, including Robert Jedicke and Karen Meech of the University of Hawaii’s Institute for Astronomy (IfA), strongly suggests that Oumuamua has a purely natural origin. The research team reported its findings in the July 1, 2019, issue of Nature Astronomy.

“While Oumuamua’s interstellar origin makes it unique, many of its other properties are perfectly consistent with objects in our own solar system,” said Jedicke. Oumuamua’s orbit and its path through our solar system matches a prediction published in a scientific journal by Jedicke and his colleagues half a year before Oumuamua’s discovery.

“It was exciting and exhausting to coordinate all the Oumuamua observations with my co-authors from all around the world,” said Meech. “It really was a 24-hour-a-day effort for the better part of two months. In that paper we established that Oumuamua rotates once in about seven hours and that it had a red color similar to many objects locked within our own solar system.”

The work showed that Oumuamua must have an extremely elongated shape, like a cigar or maybe a frisbee, unlike any known object in our solar system based on changes in its apparent brightness while it rotated.

Meech and other UH researchers were essential to another paper published in Nature a year ago that indicated Oumuamua is accelerating along its trajectory as it leaves our solar system. This behavior is typical of comets but astronomers have found no other visual evidence of the gas or dust emissions that create this acceleration.

“While it is disappointing that we could not confirm the cometary activity with telescopic observations, it is consistent with the fact that Oumuamua’s acceleration is very small and must therefore be due to the ejection of just a small amount of gas and dust,” Meech explained.”

“We have never seen anything like Oumuamua in our solar system,” said Matthew Knight of the University of Maryland. “Our preference is to stick with analogs we know, unless, or until we find something unique. The alien spacecraft hypothesis is a fun idea, but our analysis suggests there is a whole host of natural phenomena that could explain it.”

The team of astronomers hailing from the U.S. and Europe met late last year at the International Space Science Institute (ISSI) in Bern, Switzerland, to critically assess all the available research and observations on Oumuamua and will meet again later this year. Their first priority was to determine whether there is any evidence to support the hypothesis that Oumuamua is a spacecraft built by an alien civilization.

“We put together a strong team of experts in various different areas of work on Oumuamua. This cross-pollination led to the first comprehensive analysis and the best big-picture summary to date of what we know about the object,” Knight explained. “We tend to assume that the physical processes we observe here, close to home, are universal. And we haven’t yet seen anything like Oumuamua in our solar system. This thing is weird and admittedly hard to explain, but that doesn’t exclude other natural phenomena that could explain it.”

The ISSI team considered all the available information in peer-reviewed scientific journals and paid special attention to the research published by IfA researchers. In particular, Meech’s research paper in the journal Nature first reported on Oumuamua’s discovery and characteristics in December 2017, just two months after the unusual object was identified by Pan-STARRS1 (Panoramic Survey Telescope and Rapid Response System) on Haleakala.

The ISSI team considered a number of mechanisms by which Oumuamua could have escaped from its home system. For example, the object could have been ejected by a gas giant planet orbiting another star. According to this theory, Jupiter created our own solar system’s Oort cloud, a population of small objects only loosely gravitationally bound to our Sun in a gigantic shell extending to about a third of the distance to the nearest star. Some of the objects in our Oort cloud eventually make it back into our solar system as long period comets while others may have slipped past the influence of the Sun’s gravity to become interstellar travelers themselves.

The research team expects that Oumuamua is just the first of many interstellar visitors discovered passing through our solar system, and they are collectively looking forward to data from the Large Synoptic Survey Telescope (LSST) that is scheduled to be operational in 2022. The LSST, located in Chile, may detect one interstellar object every year and allow astronomers to study the properties of objects from many other solar systems.

While ISSI team members hope that LSST will detect more interstellar objects, they think it is unlikely that astronomers will ever detect an alien spacecraft passing through our solar system and they are convinced that Oumuamua was a unique and extremely interesting but completely natural object.

What do sick kids really want in hospital?

‘Make two out of one’ — division of artificial cells

Scienmag Feb 24, 2020
Max Planck scientists uncover a novel and generic mechanism for the division of artificial cells into two daughter…