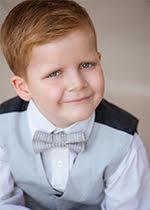 Credit: Courtesy of the Doherty family

PHOENIX, Ariz. — Aug. 22, 2019 — An international team of researchers led by Yale University, University of Iowa, and the Translational Genomics Research Institute (TGen), an affiliate of City of Hope, has discovered a new pathway that may improve success against an incurable type of children’s brain cancer.

The study results, published today in Nature Communications, suggest that scientists have identified a unique way to disrupt the cellular process that contributes to Diffuse Intrinsic Pontine Gliomas (DIPG).

DIPG is a highly aggressive and inoperable type of tumor that grows in the brain stem. This cancer usually strikes children less than 10 years old, and most patients do not survive more than a year after diagnosis.

Earlier studies identified a genetic mutation called PPM1D — which is critical for cell growth and cell stress response –as a contributor to DIPG. Previous efforts to directly attack the PPM1D mutation, however, proved futile in controlling DIPG.

The TGen-Yale-Iowa led team discovered a vulnerability in the metabolic process for creating NAD, a metabolite that is necessary for all cell life.

“This is really an amazing new way to attack this cancer. We found that the mutated gene PPM1D essentially sets the stage for its own demise,” said Michael Berens, Ph.D., a TGen Deputy Director, head of TGen’s DIPG research, and one of the study’s senior authors.

Researchers found that mutated PPM1D silences a gene called NAPRT, which is key to the production of the NAD metabolite. With NAPRT unavailable, the cell switches to another protein needed to create NAD called NAMPT. By using a drug that inhibits the production of NAMPT, researchers found they could essentially starve to death those cancer cells with the PPM1D mutation.

“It is such a devastating disease, and we have been so stymied in our progress for new DIPG therapies. Many drugs have been tested with no success at all. These findings now offer new hope for children with this truly terrible disease,” said another senior author Ranjit Bindra, M.D., Ph.D., Associate Professor of Therapeutic Radiology at the Yale Cancer Center, where he treats children with DIPG.

Researchers had long thought DIPG was a childhood version of adult brain tumors, and so similar treatments for adult gliomas were tested extensively in children, and failed.

Frustration over the lack of an effective therapy for DIPG led the researchers to take a different approach in the search for new drugs to treat this disease. They chose to look at the tumor in terms of its potential vulnerabilities, and thus began a year-long molecular journey to understand what role the PPM1D mutation played in altering cancer metabolism.

“When epigenetic silencing results were analyzed, we were gratified to discover that DIPG cells with the PPM1D mutation had created a vulnerability to a key enzyme for which small molecule inhibitors were already available,” said Sen Peng, Ph.D., a bioinformatician in TGen’s Cancer & Cell Biology Division, and one of the study’s contributing authors.

While the number of patients affected in the U.S. is small — about 300 annually — DIPG is recognized as a profoundly tragic illness.

“Our study’s potential translational impact should lead to clinical trials and renewed hope for these families who face such a difficult diagnosis for their child,” said Charles Brenner, Ph.D., Chairman of Biochemistry at the University of Iowa, and an expert in nicotinamide adenine dinucleotide (NAD) metabolism. Dr. Brenner also was one of the study’s senior authors.

Dr. Bindra said this study suggests that other cancers with PPM1D mutations, such as breast and gynecological cancers, could be similarly targeted.

About TGen, an affiliate of City of Hope

Translational Genomics Research Institute (TGen) is a Phoenix, Arizona-based non-profit organization dedicated to conducting groundbreaking research with life-changing results. TGen is affiliated with City of Hope, a world-renowned independent research and treatment center for cancer, diabetes and other life-threatening diseases: http://www.cityofhope.org. This precision medicine affiliation enables both institutes to complement each other in research and patient care, with City of Hope providing a significant clinical setting to advance scientific discoveries made by TGen. TGen is focused on helping patients with neurological disorders, cancer, diabetes and infectious diseases through cutting-edge translational research (the process of rapidly moving research toward patient benefit). TGen physicians and scientists work to unravel the genetic components of both common and complex rare diseases in adults and children. Working with collaborators in the scientific and medical communities worldwide, TGen makes a substantial contribution to help our patients through efficiency and effectiveness of the translational process. For more information, visit: http://www.tgen.org. Follow TGen on Facebook, LinkedIn and Twitter @TGen.

The Paleozoic Diet: Why Animals Eat What They Eat