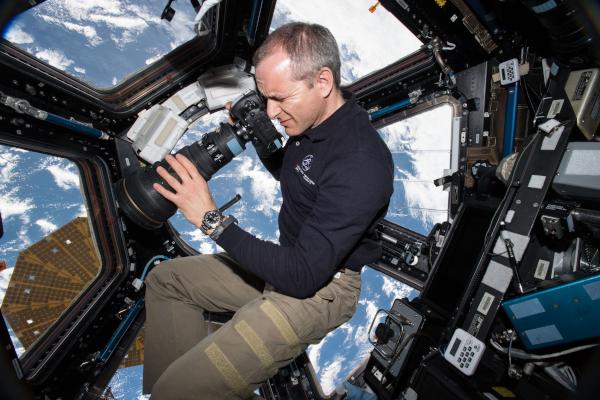 Those who see Earth from the International Space Station often say it provides a new appreciation of our planet. The Avian Migration Aerial Surface Space project, or AMASS, takes advantage of thousands of images captured by astronauts to give people an appreciation of the migrations many birds undertake across the planet.

Also called Space for Birds, the project maps the routes taken by seven endangered or threatened bird species, highlighting along those routes habitat changes caused mainly by human activities. After more than four years, astronauts now have captured images of key locations along the migratory paths of all seven species. The Roberta Bondar Foundation sponsors AMASS in collaboration with NASA and the Canadian Space Agency (CSA). The foundation is a research and education effort started by Bondar, the first Canadian woman to fly in space.

“We look at environmental education as a way to get people to love something,” says Bondar. “If they love something, they will want to protect it.” She traveled to remote areas, taking photos on the ground and in the air of the birds and their environment, but knew that images from space could help people grasp the bigger picture.

The images are part of the space station’s Crew Earth Observation (CEO) project, which supports a wide variety of research and education projects. AMASS began working with CEO in 2016, photographing locations along the North American migratory path of the Whooping Crane. The collaboration expanded in 2018 and 2019 when CSA astronaut David Saint-Jacques flew aboard the space station.

“It has always been one of my passions to look at Earth from space,” Saint-Jacques says. “Because birds are affected by what we do to the planet, this was a beautiful way for me to give a theme to my Earth observations. Seeing the span of migrations from space, to imagine birds flying these incredible distances, was awe inspiring.”

The seven species for the project, which Bondar chose in consultation with the United Nations Environment Program and US Fish and Wildlife Service, are the Curlew Sandpiper, Black-tailed Godwit, Lesser Flamingo, Piping Plover, Sprague’s Pipit, Red Knot rufa species, and Whooping Crane.

The project plans to host exhibits and educational events, but during the pandemic, decided to create online story maps. These maps provide information about the biology and threats to survival for each of the species, as well as images, video, and maps of land use changes. The first completed story map covers the Lesser Flamingo.

In addition, CSA’s Exploring Earth, an educational project using photos from space on an interactive map, is incorporating bird migration information. The map has photographs from space, information on each species, and resources for teachers. Users can learn about a species, its breeding grounds, migratory pathways, and overwintering areas.

“Space imagery shows the position of a habitat in the broader scope of the planet,” Bondar says. “The overlapping of emotion and vision focuses people on conservation.”

Taking photos from the space station presents unique challenges, including the speed at which the station moves – five miles per second – and the crew’s busy schedule. “You have these little slivers of time going over a location and not a lot of time to prepare,” Saint-Jacques says. “You’re looking forward as the scene comes toward you pretty fast and have just a few seconds over that location and a few more as you look back flying away. Chasing the right frame is a bit of an art.”

In addition, all the logistics must be in place, including identifying the target and having the correct camera lens, while also accounting for the amount of cloud cover and season.

But the effort is worth it. “The distances these birds fly instinctively is still mysterious to zoologists,” Saint-Jacques says. “It takes humans immense technology to fly around the world, and birds just do it. I gained more respect for those animals, to see that the entire world is their environment.”

Bondar notes that almost everyone has a camera these days, even if just on a phone, providing an accessible lens through which to view nature. “Photography can reconnect people to the natural world. From space, we can see entire migratory corridors and patterns we didn’t even know existed. It’s a view of the extraordinary feats of these birds.”

For Saint-Jacques, one of the less tangible of the many benefits of space exploration is that new perspective. “The space station is a great testament to the unifying power of space exploration. Very quickly you feel that you are not a citizen of a particular country, but an Earthling. We share this planet with many other species, and we have the responsibility to be decent housemates.”