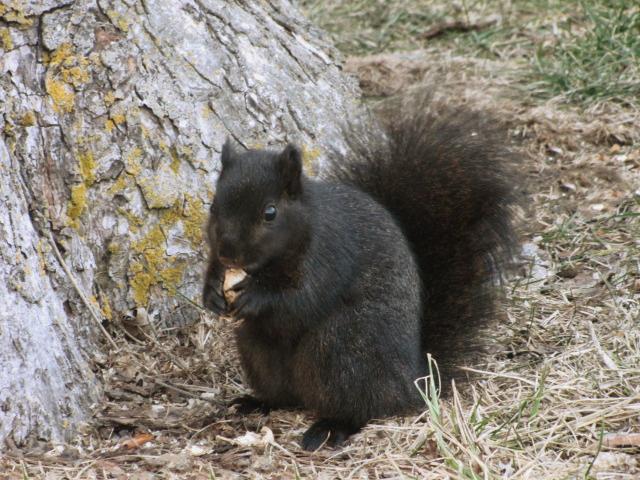 Research published in the journal BMC Evolutionary Biology has shed new light on why some grey squirrels are black.

The study was led by Dr Helen McRobie of Anglia Ruskin University (ARU), who has previously mapped the spread of black squirrels across the UK. Black squirrels are the same species as grey squirrels, with the only difference being their fur colour.

The new work builds on Dr McRobie’s research from 2014, which found that the black fur is caused by the grey squirrel having a pigment gene with a missing piece of DNA.

Working with colleagues from the University of Cambridge and the Virginia Museum of Natural History in the United States, Dr McRobie has found that the faulty pigment gene in grey squirrels is identical to a faulty gene found in the closely-related fox squirrel, a species which is native to North America and also has black variants.

Testing DNA from grey and fox squirrels found across the United States and British Columbia, Canada, the researchers discovered that other “signatures” on the mutated gene are more closely related to the fox squirrel. This suggests it is highly likely the mutation first arose in the fox squirrel and passed to the grey squirrel through interbreeding.

Dr McRobie, Senior Lecturer in Biomedical Science at Anglia Ruskin University (ARU), said: “Squirrels take part in ‘mating chases’ where a female squirrel is pursued by lots of male squirrels and eventually one male mates with the female.

“People have spotted ‘mixed species’ mating chases, with a mix of grey and fox squirrels pursing a female. The most likely explanation for the black version of the gene being found in the grey squirrel is that a male black fox squirrel mated with a female grey squirrel.

“The fact black grey squirrels have become so common right across North America is possibly because black fur offers a thermal advantage, helping them inhabit regions with extremely cold winters. This may have contributed to the expansion of the grey squirrel’s range during the past 11,000 years, following the end of the most recent ice age, helping them spread further north into Canada.”

The black squirrels living in the UK are believed to have escaped from a private zoo, having been imported from the United States. The first wild black squirrel was recorded in Woburn, Bedfordshire, in 1912, and they are now found across many parts of South East England.

How moon jellyfish get about

Pride and prejudice at high altitude

Exploring the link between daily stress, depression, and Facebook addiction…

UC researcher examines impact opioids and HIV have on each other

MicroRNA-like RNAs contribute to the lifestyle transition of…