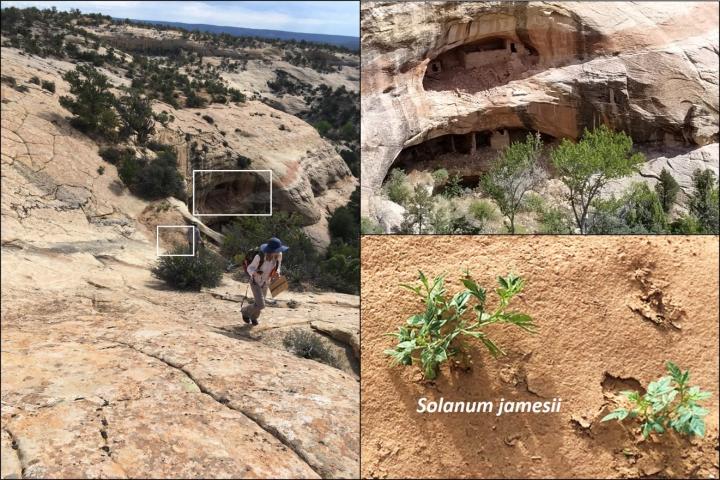 Indigenous people have lived in the Bears Ears region of southeastern Utah for millennia. Ancestral Pueblos built elaborate houses, check dams, agricultural terraces and other modifications of the landscape, leaving ecological legacies that persist to this day. Identifying how humans interacted with past environments is critical for informing how best to protect archaeological sites and ecological diversity in the present. This “archaeo-ecosystem” approach would facilitate co-management of public lands in ways that promote Indigenous health, cultural reclamation and sovereignty.

For the first time, a new study evaluated ecological legacies, archaeo-ecosystem restoration and Indigenous co-management practices in the Bears Ears region on the Colorado Plateau. The study published on May 17, 2021 in the journal Proceedings of the National Academy of Sciences.

“Bears Ears is not just about boundaries, it’s about management,” said the study’s lead author Bruce Pavlik, director of conservation at Red Butte Garden. “And it’s not just about artifacts. It’s also about the archaeo-ecosystems that are there. That’s what’s sacred to Native people.”

The authors surveyed 25 archaeological sites in the Bears Ears region that represented a wide range of locations, environments and archaeological complexity. By collecting plant specimens found at those sites, they compiled a list of 117 culturally significant plant species–those used for food, medicinal, ceremonial and utilitarian purposes by the Hopi Tribe, Ute Mountain Ute Tribe, Apache Tribe, Pueblo of Zuni and the Navajo (Diné) Nation who trace ancestry to or currently reside in the region. They found that dense concentrations of archaeological features, probably the result of larger populations of people, had a higher diversity of culturally significant plant species called ethnographic species richness. The implication is that people left behind those plants as a living legacy, either through intentional propagation or accidental release when they discarded unused seeds or fruits.

“The medicines on the landscape all have a story,” said co-author Cynthia Wilson, director of the Traditional Foods Program for Utah Diné Bikéyah and member of the Navajo (Diné) Nation. “The original proposal to designate 1.9 million acres for Bears Ears National Monument came from listening to the elders and medicine people who mapped culturally significant plants to protect our narratives. In terms of management, traditional knowledge is crucial to protect the entire ecosystem as a cultural living landscape. Our ancestors tended to these ancient gardens that warrant special management regime. Right now, there’s no real security to prevent damage.”

Co-author Arnold Clifford, renowned botanist at Carrizo Mountain Environmental & Herbarium, Inc., and member of the Navajo (Diné) Nation, noted that seven plant species that occurred within these Bears Ears sites are held as sacred as lifeway medicines. Some plant species found at archaeological sites, such as sagebrush and pinyon pine, are common across the landscape. However, at least 31 plant species were extremely rare outside of the habitation structures, including the Four Corners potato (Solanum jamesii), a native tuber that is an important medicine and food source.

“In other words, the plants weren’t randomly just there,” said Pavlik. “People brought propagules of the species in with them. This is one of the rare times in the archaeological literature where people invested in native species and brought them to their habitations. It indicates this higher level of landscape manipulation, what we call an ecological legacy of past human occupation.”

“We used what we recorded in the field to project our findings across the whole region,” Codding said. “The model can help Tribal and federal land managers identify places that need the most protection to preserve complex archaeological sites and important plant species.”

Effective stewardship of the Bears Ears region will require special management policies applied to these botanically and culturally rich archaeo-ecosystems. A blend of western science and deep Indigenous ecological knowledge can be used to mitigate the effects of increased visitation, proposed development and expanded resource extraction.

“What Tribal members have said all along is that you don’t just preserve the archaeological site,” said Lisbeth Louderback, curator of archaeology and director of the archaeobotany lab at the Natural History Museum of Utah and anthropologist at the University of Utah. “You have to preserve the entire resource space around the site, including the plants. Building a management plan incorporating both western science and traditional knowledge will get a full picture of the best way to take care of the resources and the monument.”

“The knowledge that came from this publication is not only an important contribution to Bears Ears, but also to Grand Staircase-Escalante National Monument,” Wilson said. “The ancestral Pueblo people travelled long distances to transport, trade and take care of plants like the Four Corners potato across the region and they have left these seeds for us to continue taking care of today.”