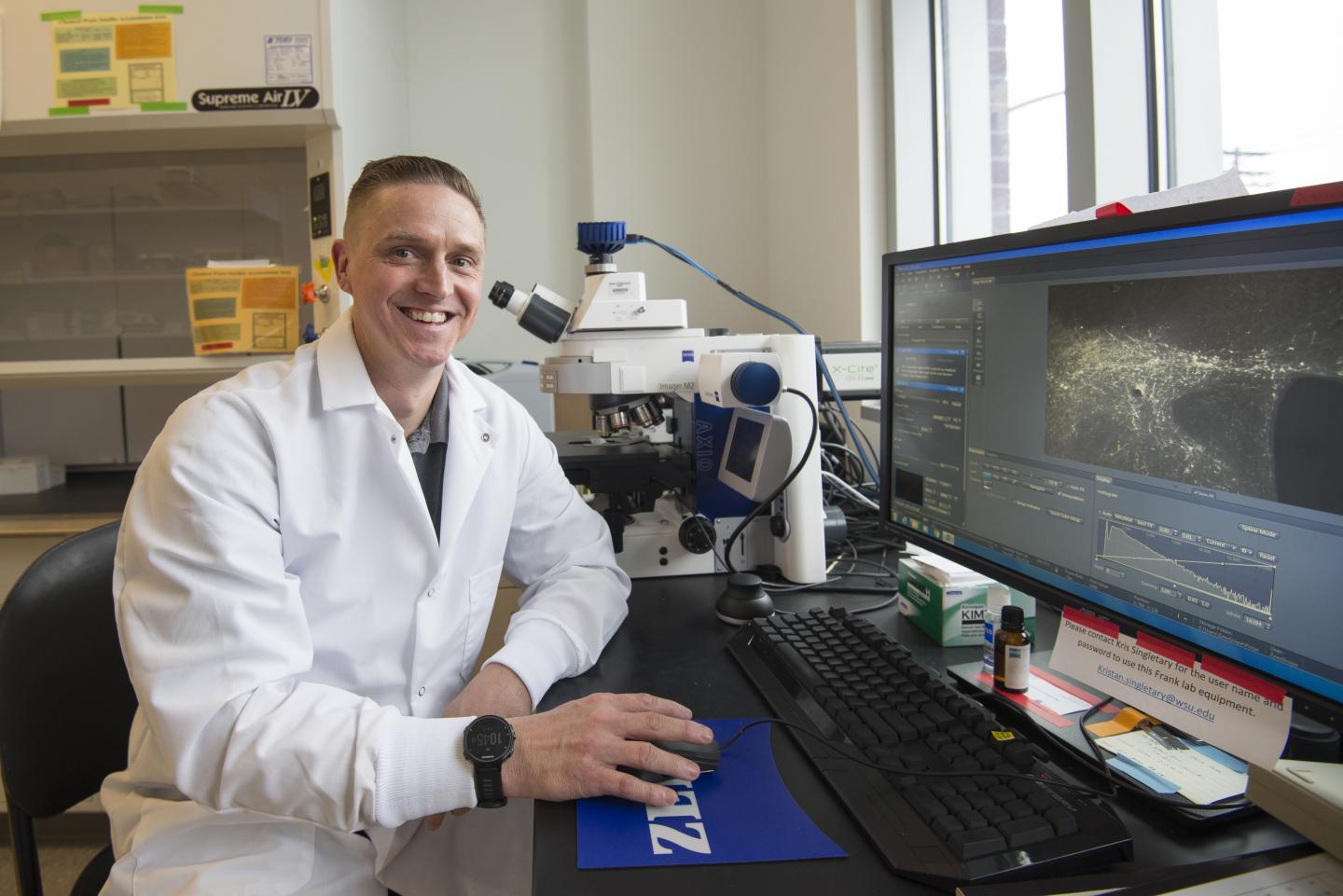 Published today in Scientific Reports, the study helps build a case for the use of sleep therapeutics following trauma exposure, said William Vanderheyden, an assistant research professor and the lead author on the study. “Basically, our study has found that if you can improve sleep, you can improve function.”

The finding holds particular promise for populations that are routinely exposed to trauma, such as military personnel and first responders, and may also benefit victims of accidents, natural disaster, violence, and abuse.

Vanderheyden made the discovery following a series of experiments in rats in which he and coauthor Christopher Davis examined the links between poor sleep and post-traumatic stress disorder (PTSD)–a psychiatric condition that affects an estimated 8 million Americans each year.

“People with PTSD oftentimes experience nightmares and other types of sleep disturbances, such as frequent awakenings and insomnia,” said Vanderheyden. “One thought was that those sleep disturbances may cause further cognitive impairment and worsen the effects of PTSD or the initial trauma. So we wanted to see whether repairing the sleep disturbances associated with trauma exposure could help alleviate the symptoms of PTSD.”

Their study used methods reviewed and approved by Washington State University’s Institutional Animal Care and Use Committee, which oversees all university animal research procedures to ensure animals’ humane treatment throughout their lifecycle. This included a commonly used PTSD rodent model in combination with optogenetics, a technique that uses light-sensitive proteins to control the activity of brain cells.

After going through the PTSD protocol, rats were assigned to two groups. In one group, the researchers used optogenetic stimulation to activate melanin-concentrating hormone (MCH)–a sleep-promoting brain cell type–over a period of seven days. Animals in the second group served as controls.

Comparing the two groups, the researchers found that optogenetic stimulation increased the duration of rapid eye movement (REM) sleep–the sleep phase thought to be important for learning and memory–across the rats’ rest and active phases.

The researchers then assessed the rats’ behavior on a three-day classical conditioning experiment involving a memory task. On day one, rats learned to associate an audible tone with the mildly unpleasant experience of receiving a small foot shock immediately after hearing the tone. After several occurrences, rats would freeze after hearing the tone, anticipating the foot shock. On day two, they heard the tone 30 times without receiving the shock, allowing them to gradually extinguish that memory. On the third day, the researchers played the tone 10 times to test to what extent the previous day’s memory extinction had stuck. They found that rats that had received optogenetic stimulation to increase their sleep time had more successfully extinguished the memory, freezing less than control rats.

“This highlights that there is a time-sensitive window when–if you intervene to improve sleep–you could potentially stave off the negative effects of trauma,” Vanderheyden said. “Conversely, it seems likely that if you are kept awake after a trauma, this could potentially be harmful to your cognitive function, though we haven’t directly tested this as part of our study.”

As an example, he mentioned victims of traffic accidents, who may not get much opportunity to sleep as they are poked, prodded, examined, and treated after being hospitalized for injuries. Though prioritizing sleep may not be feasible in victims with potentially life-threatening injuries, increasing sleep in other trauma-exposed populations could practically be done. Military personnel coming back from patrol could be encouraged to sleep and potentially be given sleep-promoting drugs to help them stave off any trauma experienced during their patrol, Vanderheyden said.

Vanderheyden cautioned that although their experiments suggest that manipulating sleep immediately after a trauma may be beneficial, such an intervention may or may not be effective for traumatic experiences that occurred in the more distant past.

As a next step, Vanderheyden and Davis want to delve deeper into molecular mechanisms that improve function in response to increased sleep. Their goal is to pinpoint those molecules that are important for regulating sleep or learning and memory, which will help them identify targets for the development of better drugs to help trauma-exposed populations.

Based on their findings, Vanderheyden also suggested that the use of antidepressants known as selective serotonin reuptake inhibitors (SSRIs) in people with PTSD may need to be reexamined, as SSRIs are known to suppress REM sleep.

“We may be doing our trauma victims a disservice by prescribing a class of drugs that actually eliminates a potential therapeutic avenue for them by removing their REM sleep when our findings suggest that we should be increasing REM sleep,” Vanderheyden said.

Funding for the study came from the U.S. Department of Defense-administered Congressionally Directed Medical Research Programs.