Increase of Candida auris in the EU/EEA: Need for better surveillance 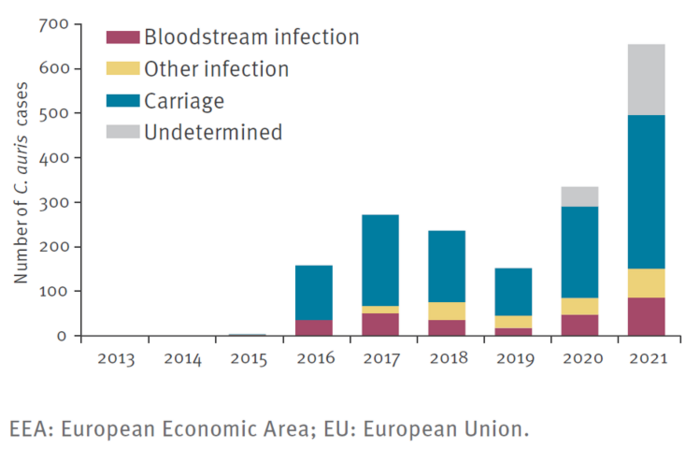 The European Centre for Disease Prevention and Control (ECDC) has been conducting surveys to collect information on the epidemiological situation of C. auris in the European Union and European Economic Area (EU/EEA). In their rapid communication published in Eurosurveillance to mark European Antibiotic Awareness Day, Kohlenberg et al. [2] analyse the data for the years 2013 to 2021 collected from the three ECDC surveys.

Almost two-thirds (63%) of cases were reported as carriage*, 15% as bloodstream infections and 10% as another type of infection. For 11% of cases, there was no available information on either carriage or infection. Cases and C. auris outbreaks occurred in several EU/EEA countries only a few years after the first cases were reported. In two countries spread of C. auris between healthcare facilities was documented.

In one region in one country, C. auris is endemic, meaning that infections and colonisations did not only occur as part of defined outbreaks. Additionally, the authors express concern about the possibility of undetected transmission and outbreaks in the EU/EEA because in four countries there was no available information at national level on whether C. auris cases were present in the country or not.

Compared to 2019, the findings from the survey indicate a slight improvement in preparedness and response in EU/EEA countries regarding prospective and retrospective surveillance, identifying and testing for the pathogen in laboratories as well as guidance for laboratory testing and for infection prevention and control.

However, given the inter-facility spread as well as endemicity in one region, Kohlenberg et al. discuss that C. auris is in the process of establishing itself as a healthcare-associated pathogen in the EU/EEA. The authors state that this, together with the high proportion (97%) of cases with no information on importation or local spread, underlines the need to further improve monitoring and surveillance of C. auris infections and outbreaks.

* The condition of carrying a pathogen within the body. Available from: https://www.merriam-webster.com/dictionary/carriage

Increasing number of cases and outbreaks caused by Candida auris in the EU/EEA, 2020 to 2021

M.C.A. has, over the past 5 years, received research grants/contract work (paid to the SSI) from Amplyx, Basilea, Cidara, F2G, Gilead, Novabiotics and Scynexis, and speaker honoraria (personal fee) from Astellas, Chiesi, Gilead, MSD, and SEGES. She is the current chairman of the EUCAST-AFST.

J. A. P. has, in the last five years, given talks and consulted for MSD, Pfizer, Gilead, Astra-Zeneca, AOP Orphan Pharmaceuticals, Cepheid, Jansen.

A. A. I. has, over the past 5 years, received honoraria for educational talks on behalf of Gilead and Pfizer.