A few years ago, when Carnegie Mellon University design researcher Christina Harrington was still making home visits for her research, she marveled at the response. 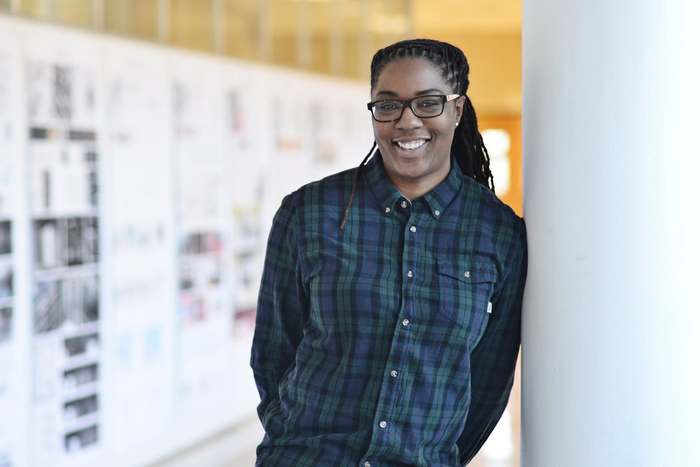 A few years ago, when Carnegie Mellon University design researcher Christina Harrington was still making home visits for her research, she marveled at the response.

“These were older Black folks, and they’d have food and drinks for us and be so excited to participate,” said Harrington, an assistant professor in the Human-Computer Interaction Institute. “It just made you think — there are so many folks with so much lived experience who could be contributing to our field, if only people would ask.”

That observation is at the heart of her latest research exploring how older Black adults in lower income environments feel about asking health questions, how they pose those questions verbally, and whether voice assistant devices respond as expected. Her paper, “‘It’s Kind of Like Code-Switching’: Black Older Adults’ Experiences With a Voice Assistant for Health Information Seeking,” was honored with a Best Paper award at the 2022 ACM CHI Conference on Human Factors in Computing Systems and is one of four papers Harrington will present at the conference.

Working with community organizations in Chicago and Detroit, Harrington’s team helped older Black adults to keep five-day diaries about their new Google Home voice assistants. The participants recorded how they’d like to use them, any prior experience with them and what health questions they’d like to ask. Harrington’s team then conducted interviews about how those queries worked out.

Lots of participants asked about chronic illness or medication and what vital signs to look for to be sure they stayed within healthy ranges. But there were challenges. Many people experienced difficulty phrasing their questions in a way the device would understand. Some tried repeating themselves or were left feeling their speech was too slow. Others felt they needed to “code switch,” or affect a more formal, less culturally comfortable dialect — to speak like a white person — which made the device much more cognitively burdensome for many participants.

“In a lot of cases, they tried to mold themselves around these devices and then blamed themselves when it didn’t work,” Harrington said. “And that’s why participatory design is so important. When technology doesn’t serve people as they are, it negates its potential benefits and alienates people who might otherwise feel empowered by its presence.”

As a designer and qualitative researcher, Harrington has been devoted to understanding and conceptualizing technology experiences that support health and expand access to marginalized communities.

“A lot of my work is now fueled by my own internal critique of research culture in academia,” she said. “You can’t tell a community what they need. You can only listen to others when they explain it to you.”

In the essay “‘All That You Touch, You Change’: Expanding the Canon of Speculative Design Towards Black Futuring,” which received an honorable mention at CHI 2022, Harrington posits that traditional approaches to technology design have long ignored Blackness and built on a narrow canon of science fiction that has historically otherized people based on their race and class.

Not only does that limit the genre and its place as a potential predictor of humanity, but it also reinforces stereotypes that have contributed to bias in evolving autonomous and intelligent technologies.

Lately, Harrington has been hosting community design workshops in Pittsburgh to consider how developers might make AI more ethical in the future. Together with Community Forge and BootUpPgh, residents of the Wilkinsburg community look at what devices have the greatest impact on their daily lives and discuss the intention versus the impact of those platforms.

“It’s about moving the technology to be more about the purposes we need, rather than having the tech just happen to us,” she said.

Harrington encourages people to physically create artifacts that help imagine what technology could accomplish in the future. But she has to ease people in.

“It’s so interesting; people shy away from the imagining piece,” Harrington said. “And I get it. Sometimes design can be very intimidating, because people think of themselves as creative or not in a binary, not realizing that creativity is more of a spectrum and an aspect that all of us inherently have in us.”

She compares it to someone who lacks artistic drawing talent but may take great pride and pleasure in listening to music. Harrington invites people to float through those different ways of being creative, beginning with games and exercises and moving to hands-on activities.

“We’ve played with a lot of different materials,” she said. “Maybe you need to write out your ideas. Or sketch them or build them or use a voice recorder to talk them through. All these things represent this wild field that lets us make technology more attainable to the very people design should be helping the most.”