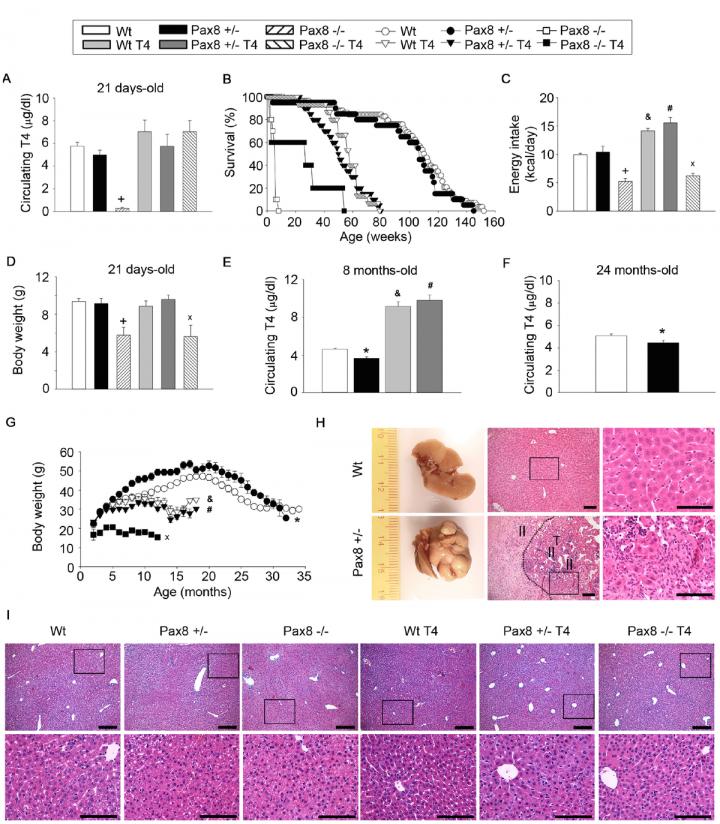 Herein, the authors show, using wild-type and the Pax8 ablated model of hypothyroidism in mice, that hyperthyroidism and severe hypothyroidism are associated with an overall unhealthy status and shorter lifespan.

Dr. Martin-Montalvo said, “The increasing burden of age-related diseases highlights the importance of uncovering the mechanisms underlying the aging process.”

TSH stimulates the production of T4 and T3 in the thyroid gland, which in turn inhibit both TRH and TSH synthesis when THs reach the hypothalamus and hypophysis, respectively.

Greater life expectancy has been associated with reduced circulating levels of T4, T3, and/or high TSH levels in both animal models and humans.

In this line, the Laron, Ames and Snell dwarf mice, which have reduced GH signalling and reduced circulating TH levels, exhibit a consistent exceptional lifespan as well as other metabolic alterations such as enhanced hepatic insulin sensitivity.

Both rodents and humans under calorie restriction, which comprises a variety of nutritional interventions with several beneficial effects including extended longevity, exhibit reduced circulating T3 levels and/or high TSH levels.

Likewise, nonagenarians from families with exceptional long lifespans, as well as their descendants, have been reported to exhibit increased TSH levels and/or decreased circulating T3 levels.

The Martin-Montalvo research team concluded, “In 1908 Dr. Max Rubner proposed the rate of living theory of aging and longevity, postulating that species with a low metabolic rate would have increased life expectancy when compared to species with a higher metabolic rate.

In this line, restricted levels of THs, which control the metabolic rate, have been associated with increased longevity as well as metabolic fitness.”

EUR 3.7M for academia and industry to pave the way for sustainable production of…

PolyU establishes an alliance with eight institutions to advance…