Researchers found male squirrels store more food than females, and if a young squirrel leaving the nest nabs a storage spot previously owned by a male squirrel, they will increase their lifetime pup production by 50 per cent. 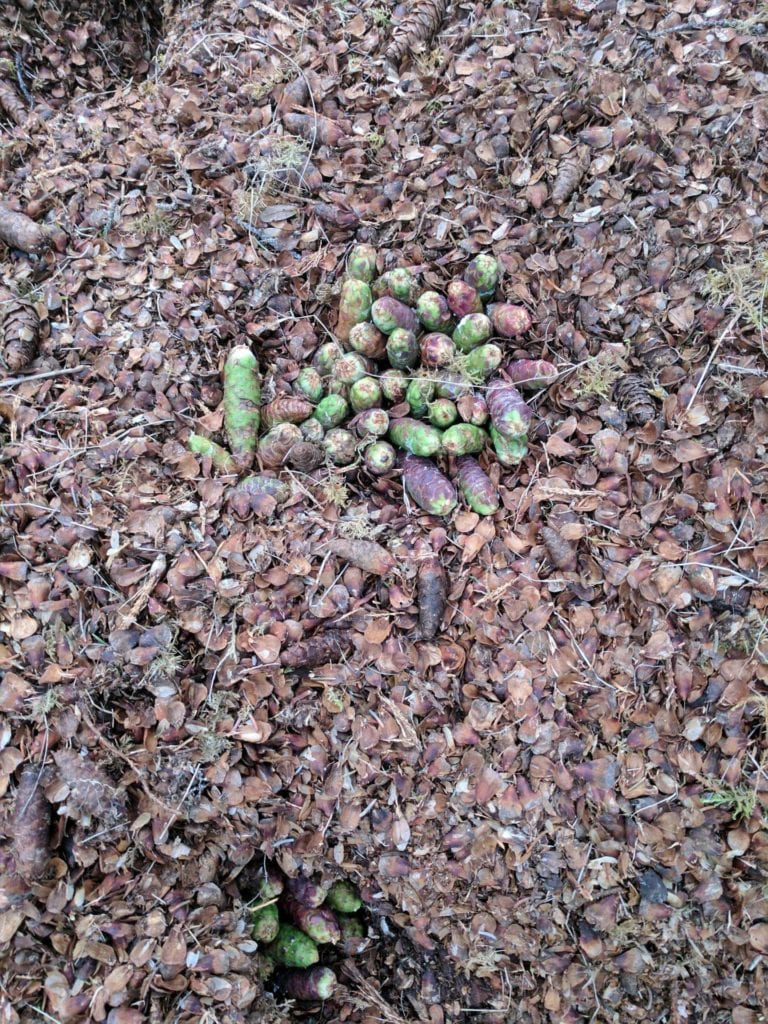 A young squirrel lucky enough to take over territory from an adult male squirrel is like a teenager falling into a big inheritance, according to a new University of Guelph study.

Researchers found male squirrels store more food than females, and if a young squirrel leaving the nest nabs a storage spot previously owned by a male squirrel, they will increase their lifetime pup production by 50 per cent.

“It’s like buying a home and finding a big pile of money buried in the walls,” said integrative biology professor Andrew McAdam, who worked on the study with lead author David Fisher, a former U of G post doc. “The previous owner of where you live can significantly impact how well off you are, at least in the squirrel world.”

For this study, Fisher and colleagues measured the food stores and reproductive outcome of young squirrels that took over real estate previously owned by either males or females who disappeared.

Squirrels collect spruce cones in the fall and store them in the ground in a “midden” for winter. A hoard can contain more than 20,000 cones, and they can remain edible for several years, said Fisher

“Good thing too, because spruce trees produce cones in boom-bust patterns. There are more bust than boom years, so if squirrels don’t store enough in the boom years they won’t have enough food to survive the bust years.”

It’s common for squirrels to take over the territories of other squirrels after they die and in taking over another squirrel’s territory, they also inherit their food stores, added Fisher.

“We have seen a food store last as long as 31 years — as long as we have been studying these squirrels — and owned by 13 different squirrels over that time period,” said McAdam.

In this study, researchers found that if a squirrel inherits its territory from a male rather than a female, it will have around 1,300 more cones on average in its midden. This stored energy will keep the squirrel alive for an extra 17 days.

The study also revealed that squirrels at their prime, which is three to four years old, have more cones than younger and older squirrels. This difference means squirrels that inherit their territory from a squirrel that died in mid-age inherit a larger cone store than those that inherit from a young or old squirrel.

“If a female squirrel is lucky enough to take over this prime real estate, then she will have lots of food, which allows her to breed earlier,” said McAdam. “This means her offspring will leave the nest early and they will have improved survival rates. Essentially, it will improve this squirrel’s genetic contribution to the next generation.”

These finding show how the behavior of one squirrel can impact the genetic contribution to the population of another squirrel they have never met, said Fisher.

“Ultimately, the food hoarding behaviour of a squirrel you have never met, and that may have even died before you were born, can impact your chances of survival.”

Running an LED in reverse could cool future computers

Key to rubustness of plants discovered

Scienmag Nov 26, 2019
Credit: Lunghammer - TU Graz In every weather situation, plants need to be robust and flexible at the same…

ASCO 2019: Delays lead to late-stage diagosis of young people with…