In the Cerrado, topography explains the genetic diversity of amphibians more than land cover

Study shows that a tree frog endemic to a mountainous region of the Brazilian savanna is unable to disperse and find genetically closer mates when the terrain is rugged, potentially endangering survival of the species 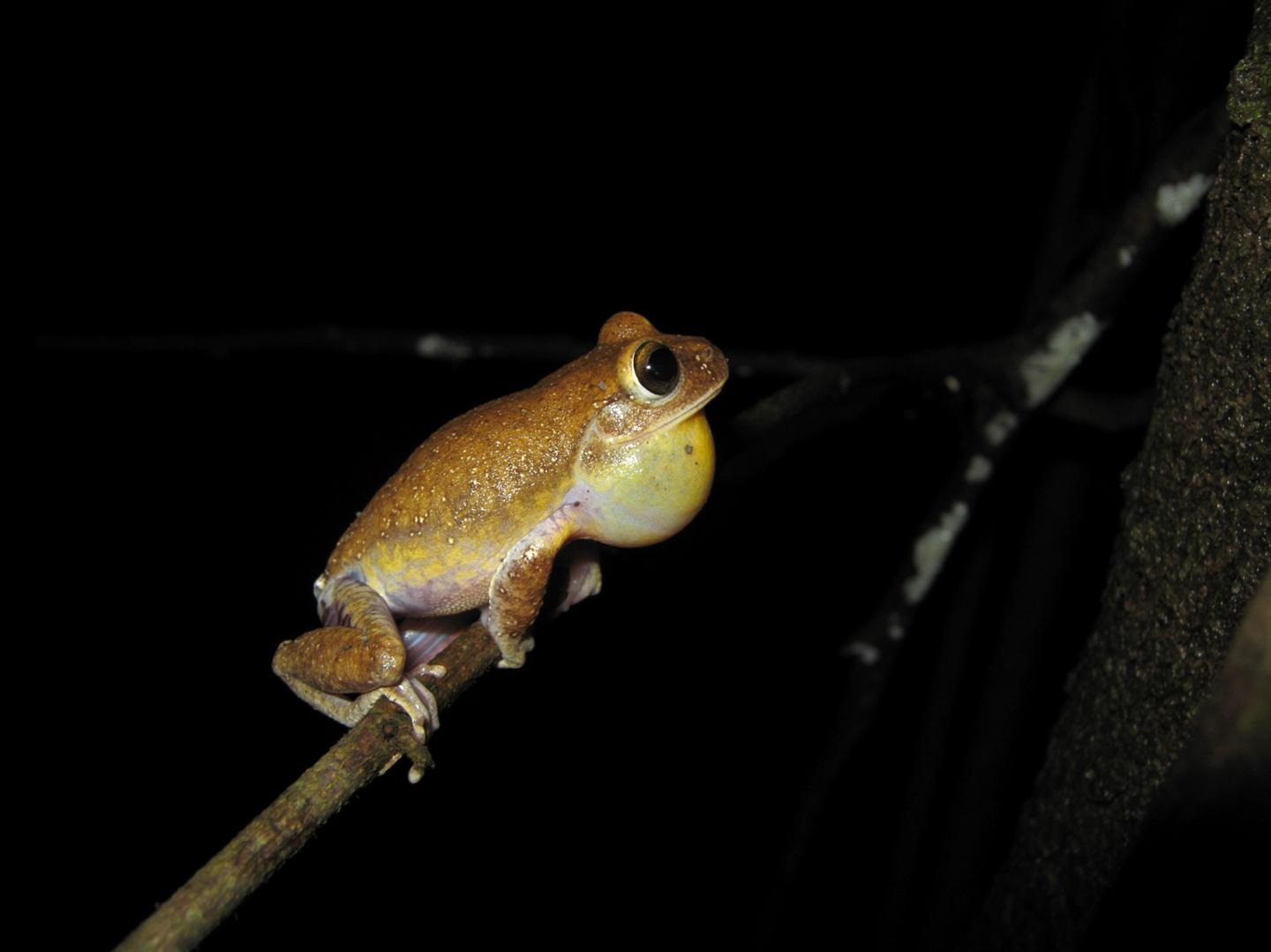 The savanna tree frog Bokermannohyla ibitiguara is about 4 cm long and is found only in gallery forest along streams in the Serra da Canastra mountain range in the state of Minas Gerais, Southeast Brazil. In this watery forest environment, it can grow, feed, mate, and lay eggs without needing to range very far throughout its life cycle, according to a study published in Diversity and Distributions.

According to the Brazilian and US researchers who conducted the study, topography rather than vegetation is the main factor leading to more or less dispersal of the species in the territory, and this information is even recorded in its DNA.

They analyzed genetic variation among groups of B. ibitiguara living inside and outside the Serra da Canastra National Park, a protected area in the region, discovering that the flatter the terrain, the more genetically diverse is the population.

In areas of highly variable elevation, individuals are genetically similar. In evolutionary terms, this can be harmful to the species, which becomes more susceptible to disease and climate change, for example.

“Genetic analysis and conservation studies typically take land cover into account, among other factors, but the Cerrado [Brazilian savanna] is topographically diverse, including montane regions with high plateaus [chapadões] separated by low areas. We set out to verify whether this variable terrain played a part in the genetic diversity of the species, and found that it did. The vegetation alone didn’t explain the genetic differences we identified between sites, or even within the same site. The topography did,” said Renato Christensen Nali, first author of the article and a professor at the Federal University of Juiz de Fora’s Institute of Biological Sciences (ICB-UFJF) in Minas Gerais, Brazil.

The study was one of the results of Nali’s doctoral research, conducted at São Paulo State University’s Bioscience Institute (IB-UNESP) in Rio Claro, Brazil, with a scholarship from FAPESP (São Paulo Research Foundation).

The research was part of the project “Reproductive ecology of anuran amphibians: an evolutionary perspective”, for which the principal investigator is Cynthia Peralta de Almeida Prado, a co-author of the article. She is a professor at UNESP’s School of Agrarian and Veterinary Sciences in Jaboticabal and teaches graduate students in zoology at IB-UNESP in Rio Claro.

The flatter the better

“The findings are very interesting because they bring to light a novel factor for conservation of the Cerrado, among other reasons. Ecological corridors and native forests are rightly considered important for conservation units, but more attention needs to be paid to the type of terrain. The topography should permit dispersal of the animals,” said Nali, who heads ICB-UFJF’s Amphibian Evolutionary Ecology Laboratory (Lecean).

To arrive at the results, the researchers analyzed 12 populations of B. ibitiguara, six inside Serra da Canastra National Park and six outside. Genetic diversity was much higher among the anurans living in the protected area than among those living outside the park. When the researchers correlated information on the degree of protection of the areas with the state of the vegetation, they found that these factors were less decisive for genetic diversity than the topography.

“The terrain is much more rugged outside the park, whereas inside it there’s a large, very even plateau where the anurans can disperse more, find mates in more distant areas, and increase their genetic diversity,” Nali said. “Outside the park, the rugged terrain and variable elevation appear to confine them to small areas.”

The influence of these factors was evidenced by genetic tests. The researchers used a technique known as macrosatellite marker analysis to examine specific regions of the genome and found higher allele diversity in the populations living in the park. Allele diversity is one of the determinants of genetic integrity and adaptive potential.

In addition, the populations living outside the park displayed a greater loss of heterozygosity. If this loss, which is associated with declining genetic variability, recurs across several generations, it can eventually threaten the population’s survival.

The study underscores the importance of topography as a factor to consider in conservation studies, as well as showing how the mere presence of a species in an area cannot ensure that it is not endangered.

“Molecular analysis enables us to find out if a population’s genetic status is favorable,” Nali said. “An area may have a large number of individuals, but DNA analysis may show that its genetic constitution is unfavorable, with few alleles and low heterozygosity. In practice, therefore, the population’s effective size is small.”

Although the study focused on only one species, he added, the findings can apply to others as well since the physical characteristics associated with dispersal are similar for other frogs and toads. More species need to be investigated to confirm the applicability of the findings.

The group noted that land cover nevertheless remains an important factor for conservation in the Cerrado, more than 50% of which has been converted into pasture or cropland, while less than 5% is protected by conservation units.