In singing mice, scientists find clue to our own rapid conversations 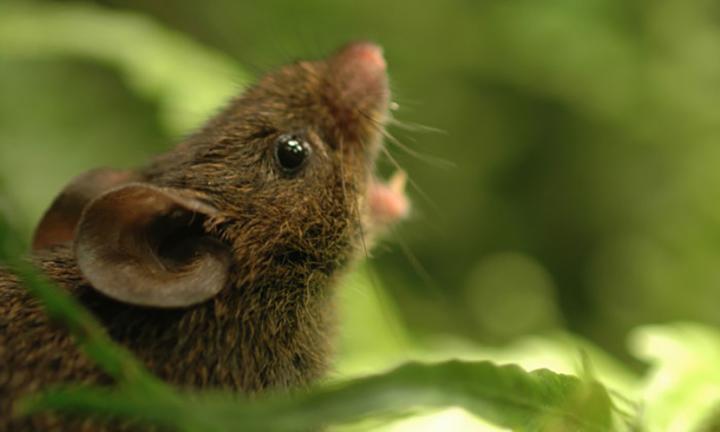 Studying the songs of mice from the cloud forests of Costa Rica, researchers from New York University School of Medicine and The University of Texas at Austin have identified a brain circuit that might enable the high-speed back and forth of human conversation. This insight, published online today in the journal Science, could help researchers better understand the causes of speech disorders and point the way to new treatments.

When two male Alston’s singing mice meet–one on his home turf and the other from outside–they sing a kind of duet like two opera performers staking their claim on territory or vying for the attention of a maiden. But the outsider, called a recruit, starts singing only when the resident male has finished his song and then immediately stops if the resident starts up again.

“The recruit is asserting that he’s there, and he’s going to be competing with the resident,” said Steven Phelps, study co-author, professor of integrative biology and director of the Center for Brain, Behavior and Evolution at UT Austin. “The resident says I’m already here and I plan to stay.”

This rapid alternation, called vocal turn-taking, is somewhat like two humans having a conversation. Standard laboratory mice don’t appear to have these kinds of vocal exchanges. Thus, the new study represents a novel mammalian model to examine brain mechanisms behind the sub-second precision of vocal turn-taking.

“Neuroscientists have traditionally focused on a small number of model organisms to better understand the human brain,” said Phelps, who pioneered the study of singing mice as a model for the neuroscience of communication and social behavior in 2002. “This study shows that scientists can gain new and exciting insights by tapping into the enormous wealth of natural diversity among animals.”

The study found that, along with brain areas that tell muscles to create notes, separate circuits in the motor cortex enable the fast starts and stops that form a conversation between vocal partners.

“Our work directly demonstrates that a brain region called the motor cortex is needed for both these mice and for humans to vocally interact,” said senior study author Michael Long, an associate professor of neuroscience at NYU School of Medicine.

Despite the ubiquity of vocal exchanges in the natural world, Banerjee said, there were previously no suitable mammalian models in neuroscience for their study.

Moving forward, the researchers are already using their mouse model to guide related exploration of speech circuits in human brains. By understanding the activity that helps to engage two brains in conversation, they can look for the processes that go awry when disease interferes with communication, potentially spurring the development of new treatments for many disorders.

“We need to understand how our brains generate verbal replies instantly using nearly a hundred muscles if we are to design new treatments for the many Americans for whom this process has failed, often because of diseases such as autism or traumatic events like stroke,” said Long.

Past work by Phelps and his team at UT Austin showed that in addition to attracting mates and repelling rival males of the same species, the calls of the males of one species of singing mice repels males of a similar but smaller species.

Along with Long, Phelps and Banerjee, study authors from the NYU Neuroscience Institute and Department of Otolaryngology at NYU School of Medicine were Daniel Okobi Jr. and Andrew Matheson.

This research was supported by the New York Stem Cell Foundation, the Simons Foundation Society of Fellows and the Simons Collaboration on the Global Brain.

This release was based in part on a press release by NYU School of Medicine.

Natural climate solutions are not enough