1,2-Dichloropropane (1,2-DCP) is a solvent widely used in the printing industry. It rose to prominence when it was linked to the development of cholangiocarcinoma, or bile duct cancer, in the employees of an offset printing firm in Osaka in 2013. Thereafter, the International Agency for the Research on Cancer reclassified 1,2-DCP as being carcinogenic to humans, and many studies have since focused on occupational cholangiocarcinoma on exposure to 1,2-DCP. 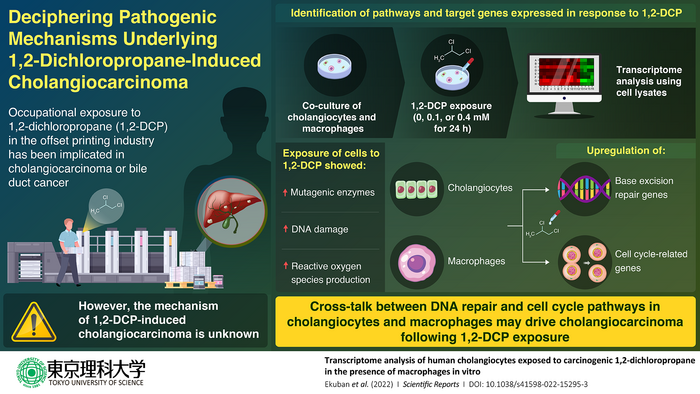 1,2-Dichloropropane (1,2-DCP) is a solvent widely used in the printing industry. It rose to prominence when it was linked to the development of cholangiocarcinoma, or bile duct cancer, in the employees of an offset printing firm in Osaka in 2013. Thereafter, the International Agency for the Research on Cancer reclassified 1,2-DCP as being carcinogenic to humans, and many studies have since focused on occupational cholangiocarcinoma on exposure to 1,2-DCP.

To solve this problem, in a new study, a group of researchers led by Professor Gaku Ichihara from Tokyo University of Science (TUS), identified the gene expression profiles of cholangiocytes co-cultured with macrophages and exposed to 1,2-DCP. Prof. Ichihara says, “Our findings identified the upregulation of genes tied to DNA repair and the cell cycle in cholangiocytes and macrophages, respectively. This suggests that the DNA damage, cell proliferation, and ultimately neoplasia occurring in the bile ducts is likely driven by the altered cell function induced by the abnormal gene expression.”

In the study, published in the journal Scientific Reports (published online on 02 July 2022), Prof. Ichihara, together with his colleagues Shigeyuki Shichino and Kouji Matsushimia at TUS, Kazuo Kinoshita from Shizuoka Graduate University of Public Health, and Sahoko Ichihara from Jichi Medical University School of Medicine, co-cultured cholangiocytes and macrophages that were exposed to varying concentrations of 1,2-DCP for 24 hours. The concentrations selected mirrored the occupational exposure of workers in a poorly ventilated environment.

Prof. Ichihara’s previous work had shown that in the presence of macrophages, 1,2-DCP induced the expression of activation-induced cytidine deaminase, which is a DNA-mutating enzyme, along with excess DNA damage and reactive oxygen species production in cholangiocytes. To delve deeper, the team used transcriptomics to study the gene expression patterns in the cells and identify the intracellular mechanisms driving carcinoma formation.

The data revealed that in the presence of 1,2-DCP, co-cultured cholangiocytes showed higher expression of base excision repair genes, whereas macrophages revealed upregulation of cell cycle genes. “The upregulation of DNA repair genes suggests an increase in DNA damage as 1,2-DCP concentration increases. Furthermore, macrophages could proliferate at a given site following 1,2-DCP exposure. Since they play an important role in the regulation of inflammatory responses by releasing cytokines and signaling molecules, their overstimulation could result in the persistent production of these compounds which ultimately influence various pathological states and cancer,” explains Prof. Ichihara.

The implications of the study are far-reaching in the fields of environmental toxicology and occupational cancer prevention. The team’s findings show that it is possible to pinpoint how potential carcinogens promote cancer without directly damaging DNA. Prof. Ichihara and his team are confident they can build on their findings and design further studies to fully understand the cross talk between cholangiocytes and macrophages and elucidate the mechanisms behind the erroneous DNA damage repair in cholangiocytes.

About Professor Gaku Ichihara from Tokyo University of Science

Dr. Gaku Ichihara is a Professor in the Department of Occupational and Environmental Health, Faculty of Pharmaceutical Sciences at the Tokyo University of Science. He completed his doctoral studies in 1993 at Nagoya University. He joined Tokyo University of Science in 2014 where his research focuses on preventing environment-induced disorders in humans. The Ichihara lab investigates the mechanisms of toxicity using human studies, experimental studies, and in vitro systems. Prof. Ichihara is a member of the committee overseeing occupational exposure limits at the Japan Society for Occupational Health, and has worked with the WHO International Agency for Research on Cancer.

Funding for this study was provided through a Grant-in-Aid for Scientific Research from the Japan Society for the Promotion of Science (17H06396).

Transcriptome analysis of human cholangiocytes exposed to carcinogenic 1,2 dichloropropane in the presence of macrophages in vitro