In exploring the ‘now,’ new book links flow of time with Big Bang

A simple question from his wife – Does physics really allow people to travel back in time? – propelled physicist Richard Muller on a quest to resolve a fundamental problem that had puzzled him throughout his 45-year career: Why does the arrow of time flow inexorably toward the future, constantly creating new “nows”?

That quest resulted in a book published today, NOW: The Physics of Time (W. W. Norton), which delves into the history of philosophers’ and scientists’ concepts of time, uncovers a tendency physicists have to be vague about time’s passage, demolishes the popular explanation for the arrow of time and proposes a totally new theory.

“Time has been a stumbling block to our understanding of the universe,” said Muller, a UC Berkeley professor emeritus who for many years taught a popular introductory course, “Physics for Future Presidents,” which he turned into a 2008 book of the same name. “Over my career, I’ve seen a lot of nonsense published about time, and I started thinking about it and realized I had a lot to say from having taught the subject over many decades, having thought about it, having been annoyed by it, having some really interesting ways of presenting it, and some whole new ideas that have never appeared in the literature.”

In commenting on the theory and Muller’s new book, astrophysicist Neil deGrasse Tyson, host of the 2014 TV miniseries “Cosmos: A Spacetime Odyssey,” wrote, “Maybe it’s right. Maybe it’s wrong. But along the way he’s given you a master class in what time is and how and why we perceive it the way we do.”

“The new physics principle is that space and time are linked; when you create new space, you will create new time,” Muller said.

Time kicked off by Big Bang

Ever since the Big Bang explosively set off the expansion of the universe 13.8 billion years ago, the cosmos has been growing, something physicists can measure as the Hubble expansion. They don’t think of it as stars flying away from one another, however, but as stars embedded in space and space continually expanding. 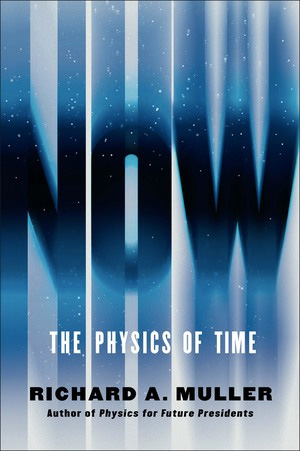 Muller takes his lead from Albert Einstein, who built his theory of general relativity – the theory that explains everything from black holes to cosmic evolution – on the idea of a four-dimensional spacetime. Space is not the only thing expanding, Muller says; spacetime is expanding. And we are surfing the crest of that wave, what we call “now.”

Because the future doesn’t yet exist, we can’t travel into the future, he asserts. He argues, too, that going back in time is equally improbable, since to reverse time you would have to decrease, at least locally, the amount of space in the universe. That does happen, such as when a star explodes or a black hole evaporates. But these reduce time so infinitesimally that the effect would be hidden in the quantum uncertainty of measurement – an instance of what physicists call cosmic censorship.

“The only example I could come up with is black hole evaporation, and in that case it turns out to be censored. So I couldn’t come up with any way to reverse time, and my basic conclusion is that time travel is not possible,” he said.

Muller’s theory explaining the flow of time led to a collaboration with Caltech theoretician Shaun Maguire and a paper posted online June 25 that explains the theory in more detail – using mathematics – and proposes a way to test it using LIGO, an experiment that detects gravitational waves created by merging black holes.

If Muller and Maguire are right, then when two black holes merge and create new space, they should also create new time, which would delay the gravitational wave signal LIGO observes from Earth.

“The coalescing of two black holes creates millions of cubic miles of new space, which means a one-time creation of new time,” Muller said. The black hole merger first reported by LIGO in February 2016 involved two black holes weighing about 29 and 36 times the mass of the sun, producing a final black hole weighing about 62 solar masses. The new space created in the merger would produce about 1 millisecond of new time, which is near the detection level of LIGO. A similar event at one-third the distance would allow LIGO to detect the newly created time.

Whether or not the theory pans out, Muller’s book makes a good case.

“(Muller) forges a new path. I expect controversy!” wrote UC Berkeley Nobel laureate Saul Perlmutter, who garnered the 2011 Nobel Prize in Physics for discovering the accelerating expansion of the universe. Muller initiated the project that led to that discovery, which involved measuring the distances and velocities of supernovae. The implication of that discovery is that the progression of time is also accelerating, driven by dark energy.

Over his career, Muller founded two major experimental programs that elucidated our understanding of time: a measurement of the cosmic microwave uniformity, for which he was awarded a MacArthur Prize, and the discovery of dark energy, for which he shared the 2014 Breakthrough Prize. Muller and his daughter Elizabeth co-founded Berkeley Earth, a nonprofit that reanalyzed Earth’s temperature record confirming global warming, and which now is a repository for historical data on global temperature and air pollution.

For his newest endeavor, Muller explored previous explanations for the arrow of time and discovered that many philosophers and scientists have been flummoxed by the fact that we are always living in the ‘now”,:from Aristotle and Augustine to Paul Dirac – the discoverer of antimatter, which can be thought of as normal matter moving backward in time – and Albert Einstein. While philosophers were not afraid to express an opinion, most physicists basically ignored the issue.

“No physics theories have the flow of time built into them in any way. Time was just the platform on which you did your calculations – there was no ‘now’ mentioned, no flow of time,” Muller said. “The idea of studying time itself did not exist prior to Einstein. Einstein gave physics the gift of time.”

Einstein, however, was unable to explain the flow of time into the future instead of into the past, despite the fact that the theories of physics work equally well going forward or backward in time. And although he could calculate different rates of time, depending on velocity and gravity, he had no idea why time flowed at all. The dominant idea today for the direction of time came from Arthur Eddington, who helped validate Einstein’s general theory of relativity. Eddington put forward the idea that time flows in the direction of increasing disorder in the universe, or entropy. Because the Second Law of Thermodynamics asserts that entropy can never decrease, time always increases.

This idea has been the go-to explanation since. Even Stephen Hawking, in his book A Brief History of Time, doesn’t address the issue of the flow of time, other than to say that it’s “self-evident” that increasing time comes from increasing entropy.

Muller argues, however, that it is not self-evident: it is just wrong. Life and everything we do on Earth, whether building houses or making teacups, involves decreasing the local entropy, even though the total entropy of the universe increases. “We are constantly discarding excess entropy like garbage, throwing it off to infinity in the form of heat radiation,” Muller says. “The entropy of the universe does indeed go up, but the local entropy, the entropy of the Earth and life and civilization, is constantly decreasing.”

“During my first big experiment, the measurement of the cosmic microwave radiation, I realized there is 10 million times more entropy in that radiation than there is in all of the mass of the universe, and it’s not changing with time. Yet time is progressing,” he said. “The idea that the arrow of time is set by entropy does not make any predictions, it is simply a statement of a correlation. And to claim it is causation makes no sense.”

In his book, Muller explains the various paradoxes that arise from the way the theories of relativity and quantum mechanics treat time, including the Schrodinger’s cat conundrum and spooky action at a distance that quantum entanglement allows. Neither of these theories addresses the flow of time, however. Theories about wormholes that can transport you across the universe or back in time are speculative and, in many cases, wrong.

The discussion eventually leads Muller to explore deep questions about the ability of the past to predict the future and what that says about the existence of free will.

Muller admits that his new theory about time may have observable effects only in the cosmic realm, such as our interpretation of the red shift – the stretching of light waves caused by the expansion of space – which would have to be modified to reflect the simultaneous expansion of time. The two effects may not be distinguishable throughout most of the universe’s history, but the creation of time might be discernible during the rapid cosmic inflation that took place just after the Big Bang, when space and time expanded much, much faster than today.

He is optimistic that in the next few years LIGO will verify or falsify his theory.

“I think my theory is going to have an impact on calculations of the very early universe,” Muller said. “I don’t see any way that it affects our everyday lives. But it is fascinating.”