Researchers from North Carolina State University and the University of North Carolina at Chapel Hill have developed an implantable biotechnology that produces and releases CAR-T cells for attacking cancerous tumors. In a proof-of-concept study involving lymphoma in mice, the researchers found that treatment with the implants was faster and more effective than conventional CAR-T cell cancer treatment. 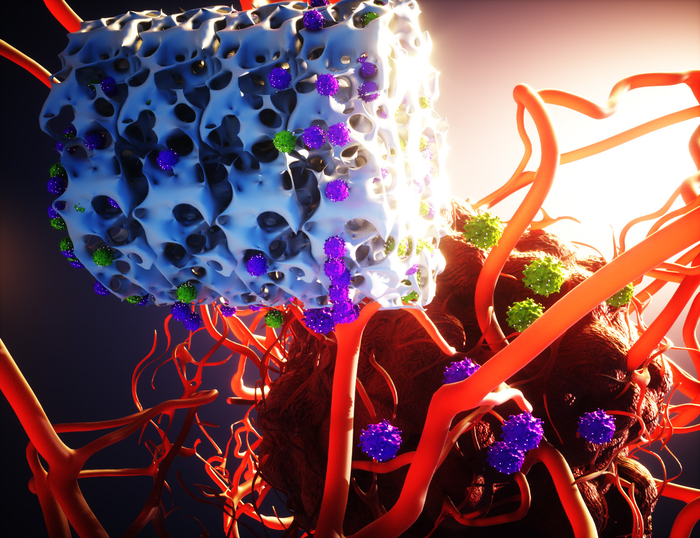 Researchers from North Carolina State University and the University of North Carolina at Chapel Hill have developed an implantable biotechnology that produces and releases CAR-T cells for attacking cancerous tumors. In a proof-of-concept study involving lymphoma in mice, the researchers found that treatment with the implants was faster and more effective than conventional CAR-T cell cancer treatment.

T cells are part of the immune system, tasked with identifying and destroying cells in the body that have become infected with an invading pathogen. CAR-T cells are T cells that have been engineered to identify cancer cells and destroy them. CAR-T cells are already in clinical use for treating lymphomas, and there are many clinical trials under way focused on using CAR-T cell treatments against other forms of cancer.

“A major drawback to CAR-T cell treatment is that it is tremendously expensive – hundreds of thousands of dollars per dose,” says Yevgeny Brudno, corresponding author of the study and assistant professor in the joint biomedical engineering department at NC State and UNC.

“Due to its cost, many people are shut out from this treatment. One reason for the high cost is that the manufacturing process is complex, time-consuming and has to be tailored to each cancer patient individually,” Brudno says. “We wanted to address challenges in CAR-T treatment related to both manufacturing time and cost.”

“Reducing the manufacturing time is even more critical for patients with rapidly progressing disease,” says Pritha Agarwalla, lead author of the study and a postdoctoral researcher in the joint biomedical engineering department.

To tackle this challenge, the researchers created a biotechnology called Multifunctional Alginate Scaffolds for T cell Engineering and Release (MASTER). The work was done in partnership with Gianpietro Dotti, professor in the Department of Microbiology and Immunology and co-leader of the Immunology Program at the Lineberger Cancer Center at UNC; and Frances Ligler, a professor of biomedical engineering at Texas A&M University.

To understand how MASTER works, you have to understand how CAR-T cells are produced. Clinicians first isolate T cells from patients and transport them to a clean manufacturing facility. At this facility, researchers “activate” T cells with antibodies over several days, preparing them for reprogramming. Once T cells are activated, researchers use viruses to introduce the CAR gene, reprogramming the T cells into CAR-T cells that target cancer cells. Researchers then add factors to stimulate the CAR-T cells to proliferate, expanding their number. Finally, after these manipulations are complete – a process that can take weeks – the cells are brought back to the hospital and infused into the patient’s bloodstream.

“Our MASTER technology takes the cumbersome and time-consuming activation, reprogramming and expansion steps and performs them inside the patient,” Agarwalla says. “This transforms the multi-week process into a single-day procedure.”

MASTER is a biocompatible, sponge-like material with the look and feel of a mini marshmallow. To begin treatment, researchers isolate T cells from the patient and mix these naïve (or non-activated) T cells with the engineered virus. Researchers pour this mixture on top of the MASTER, which absorbs it. MASTER is decorated with the antibodies that activate the T cells, so the cell activation process begins almost immediately. Meanwhile, MASTER is surgically implanted into the patient– in these studies, a mouse.

After implantation, the cellular activation process continues. As the T cells become activated, they begin responding to the modified viruses, which reprogram them into CAR-T cells.

“The large pores and sponge-like nature of the MASTER material brings the virus and cells close together, which facilitates cellular genetic reprogramming,” says Agarwalla.

The MASTER material is also impregnated with factors called interleukins that foster cell proliferation. After implantation, these interleukins begin to leach out, promoting rapid proliferation of the CAR-T cells.

“Engineering the material so that it is dry and absorbs this combination of T cells and virus is critically important,” Brudno says. “If you try to do this by applying T cells and virus to a wet MASTER, it just doesn’t work.”

“Our technology performed very well,” Brudno says. “It would take at least two weeks to create CAR-T cells from naïve T cells for clinical use. We were able to introduce the MASTER into a mouse within hours of isolating naïve T cells.”

In addition, since cells are implanted within hours of isolation, the minimal manipulation creates healthier cells that exhibit fewer markers associated with poor anti-cancer performance in CAR-T cells. Specifically, the MASTER technique results in cells that are less differentiated, which translates to better sustainability in the body and more anti-cancer potency. In addition, the cells display fewer markers of T-cell exhaustion, which is defined by poor T cell function.

The improvement in anti-cancer efficacy was especially pronounced over the long term, when mice were faced with a recurrence of lymphoma.

“The MASTER technology was very promising in liquid tumors, such as lymphomas, but we are especially eager to see how MASTER performs against solid tumors – including pancreatic cancer and brain tumors,” Brudno says.

“We’re working with an industry partner to commercialize the technology, but there’s still a lot of work to be done before it becomes clinically available. Further work to establish the safety and robustness of this technology in animal models will be necessary before we can begin exploring clinical trials involving human patients.”

While it’s impossible to estimate what the cost of MASTER treatment might be if it is eventually approved for clinical use, Brudno says he’s optimistic that it would be substantially less expensive than existing CAR-T treatment options.

“We’re also exploring opportunities with other industry partners for taking the fundamental concepts of MASTER and applying them for use in regenerative medicine and in treating autoimmune disease,” Brudno says.

The paper, “Bioinstructive Implantable Scaffolds for Rapid In Vivo Manufacture and Release of CAR-T Cells,” will be published in Nature Biotechnology on March 24. The paper was co-authored by Kristen Froehlich, a former undergraduate at NC State; Edikan Ogunnaike, Sarah Ahn of UNC; and Anton Jansson of NC State.