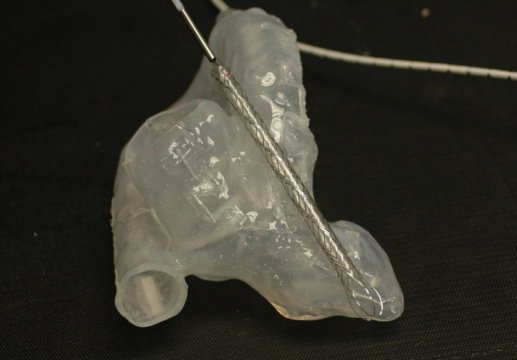 In the moments after a heart attack, every second counts. Medical professionals need to act quickly to stabilize the patient and prevent further damage to the heart. Often, that means opening up the chest cavity — a complex and traumatic procedure — and implanting a left ventricular assist device (LVAD) to help the weakened heart muscle keep pumping blood throughout the body.

Thanks to a new type of LVAD developed by Penn State researchers, such an invasive procedure might not be necessary for some heart patients. The tiny Heartmate PHP (percutaneous heart pump) is inserted into the femoral artery in the thigh and threaded up through the body into the left ventricle, where it keeps the blood flowing and thereby allows the heart to begin to heal right away. Recently approved for use in Europe, the device is currently undergoing trials for FDA approval in the United States. Once certified for use here, the pump has the potential to prolong the lives of tens of thousands of people each year.

"This is the first device that allows a cardiologist or technician to immediately stabilize someone who has had a serious heart attack," says Robert Kunz, principal investigator for the project. "Up until now, there was no question that if the patient's heart stopped, the surgeon was cracking open the chest and going in. This pump is designed to be inserted, deployed, and operating within minutes of a patient suffering a heart attack. It buys some time, several days up to a couple of weeks, for the doctor to assess the situation — to say 'We're good for now' while determining next steps."

Kunz is not a surgeon himself. He's an aerospace engineer, which at first blush may seem like an improbable match with biomedical research. But in fact, the six-millimeter-wide blood pump is essentially a miniature propeller, and Kunz and his research team applied the same suite of strategies and tools to developing the pump that they use for designing submarine and torpedo propellers. "This device is a turbomachine, just like the propeller on a submarine," Kunz says. "When it comes to fluid dynamics, the equations are the same — no matter what the fluid. In this case it's blood."

Work on the heart pump began in 2004, when Kunz and his research group were approached by Datascope, a medical technology company, to collaborate on the project. A multidisciplinary team including fluid dynamics researchers, materials scientists, engineers, structural mechanics experts, and machinists started designing prototype pumps as well as heart models to measure performance.

The pump's components include a tiny, rapidly spinning, collapsible impeller that is housed within a collapsible cannula, or tube. With an elastic consistency similar to that of a pencil eraser, the impeller's blades can fold down for insertion into a three-millimeter-diameter sheath, yet are firm enough to pump more than four liters of blood per minute with a pressure rise of one-tenth of an atmosphere — the capacity of a healthy adult male's heart. "Once the cannula has been threaded through the femoral artery into the heart," Kunz explains, "a cardiologist pulls a control cable to push it out and — poof — it deploys and the impeller expands to about six millimeters and starts spinning."

Because of its small diameter, the impeller has to spin fast — nearly 20,000 revolutions per minute (RPM), more than half the rotation rate of the space shuttle's main engine. And that poses a challenge: Putting a spinning propeller into relatively stagnant blood spells trouble for red blood cells, which are critical for carrying oxygen. The researchers had to figure out a way to minimize red blood cell damage, which reduces their ability to transport oxygen and releases hemoglobin, which can harm kidneys and other organs.

"We knew we had to distribute the power that we were adding to the blood in a way that wouldn't cause a lot of shear, which is stress encountered by the blood cells as they're flowing through the impeller blades," Kunz says. "So we went through several designs, revising the shape of the blades according to our results. Some of our early designs were terrible — they just demolished the blood. Gradually we improved it, contouring the blades, reshaping the tip, adjusting speed."

The final product can be a lifesaver for heart attack sufferers, allowing the heart to function while the patient awaits heart bypass surgery or a heart transplant. In the best-case scenario, a patient can heal on his own and be weaned off of the pump. The pump can also provide support during a heart catheterization procedure, Kunz says. "Catheterization can be traumatic to the heart and can cause things to get worse, and the pump can be a valuable just-in-case measure."

For Kunz and his team, creating the Heartmate PHP provided a new opportunity to pursue technologies outside their normal expertise, including circulatory system physiology, blood cell mechanics, and biochemistry. "This was an exciting project for us," Kunz says. "We look forward to the day when it's in the marketplace in the United States, saving people's lives."

Thoratec, one of a few companies in the world that sees blood pump devices through manufacturing, development, and clinical trials to commercialization, bought the blood pump project from Datascope in 2011.

The above post is reprinted from materials provided by Penn State University. The original item was written by Krista Weidner. Note: Content may be edited for style and length.