In a body that rebels, the search for a delicate balance 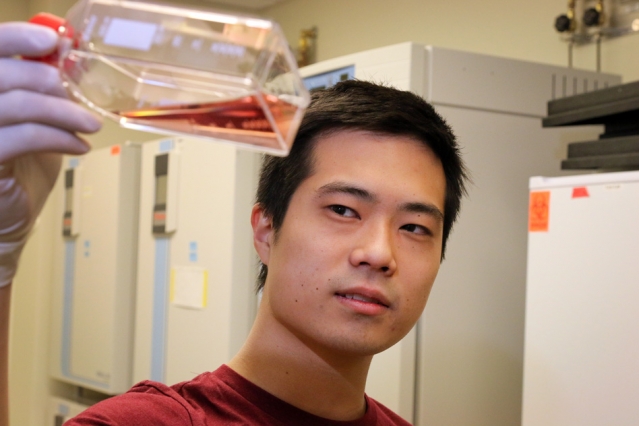 When Elliot Akama-Garren was in high school and tried to envision his future, his path was by no means clear to him.

“Growing up, I was interested in nearly every subject,” he says. “I could see myself becoming a historian, a journalist, a scientist, a physicist, or a chemist,” he says.

Now a senior at MIT nearing the completion of his biology degree, Akama-Garren has found and cultivated his passions, which range from research to ice hockey to teaching. Recently selected as one of this year’s 32 American recipients of the Rhodes Scholarship, Akama-Garren — along with two other MIT recipients — will spend the next academic year pursuing studies and research at Oxford University.

Akama-Garren’s research interests lie in immunology, a fascination that began before his junior year of high school. That summer he worked with Bill Robinson, an associate professor of medicine at Stanford University, to study rheumatoid arthritis — an autoimmune disease that typically results in inflamed and painful joints.

He loved the experience. “Working in the lab early in my high-school career allowed me to put my schoolwork in proper perspective. I was fortunate enough to see how much of what one learns in school can impact not just one’s own life, but also other people’s lives,” he says. “Instead of the result being a grade on a test, the results in science are discoveries and new therapies.”

Akama-Garren continued working on the project even after the summer research program had finished; each day, as soon as his classes ended, he would bike to the lab, where he would stay for hours, working with mice and examining samples. His work was later published in the Journal of Immunology. “I had no lab experience before that, but Bill let me join his lab, and that’s how my interests in immunology were formed,” Akama-Garren says. “I owe a lot to Bill for giving me that opportunity.”

Having grown up on the other side of the country, in Palo Alto, Calif., Akama-Garren didn’t know much about MIT before visiting. But when he came to campus for the first time, he began to feel that it might be just the place for him.

An avid ice hockey player who has loved skating since he was 7 years old, Akama-Garren was excited to discover MIT’s ice rink in the middle of campus and a vibrant, competitive men’s ice hockey team. And a short stroll away, across the Charles River, he could glimpse Massachusetts General Hospital, where he hoped to learn more about medicine.

His visit solidified his decision. “The kind of values that MIT adopts aligned greatly with what I want to do. The Institute’s emphasis on discovery, innovation, and advancing humanity — these are all things that motivate me,” Akama-Garren says.

One month into his freshman year, Akama-Garren joined the lab of Tyler Jacks, the David H. Koch Professor of Biology and director of MIT’s Koch Institute for Integrative Cancer Research, where he began work on a project related to cancer immunology.

“The immune system is designed to discriminate against millions of pathogens that humans are exposed to,” Akama-Garren explains. “By the same token, the immune system should be able to distinguish between tumors and healthy cells. If we can promote this type of response, the potential is huge, as we’ve already seen with recent advances in cancer immunotherapy.”

While the immune system may be uniquely poised as a tool to attack tumors, it faces the same basic challenge as all cancer research: Cancers are an overgrowth of the body itself, and targeting tumor cells without harming their healthy counterparts is difficult. It’s always about finding a balance — give enough treatment to kill the cancerous cells, but in low-enough doses to keep the body functioning. In the case of cancer immunology, that balance is between immunity — immune cells attacking the tumor — and tolerance, preventing immune cells from attacking healthy cells.

The mechanism that Akama-Garren studied involved a type of immune cell called regulatory T cells, or “Tregs,” which suppress autoimmune responses. When all is well, Tregs prevent the body from turning on itself by attacking its own cells. But when cancer develops, Tregs pave the way for uncontrolled cell growth.

Akama-Garren was studying how Tregs respond to lung cancer. Using genetic sequences engineered in the DNA of lab mice, researchers in the Jacks lab have been able to gain tighter control over the immune system; in the study of Tregs, they were able to use genetically-engineered mice to eliminate Tregs.

“What we’re doing is an extreme; we’re getting rid of all Tregs,” Akama-Garren says. “But certainly there’s a threshold between the two extremes. If one could get rid of some Tregs, especially Tregs specifically in the tumor’s vicinity, that might be of more benefit without autoimmune harm.”

His four years in Jacks’ lab have been impactful in many ways, Akama-Garren says. “Tyler has been a major influence. He’s made an effort to get to know me — not only as a scientist or student, but as a person,” Akama-Garren says. “The way Tyler runs his lab, the way he comes up with ideas that challenge the status quo and new ways to approach problems, is something that has been simultaneously educational and inspiring.”

Through outreach, learning, and teaching

While Akama-Garren was approaching medical problems from inside the lab, he also took time during his years at MIT to observe the real-life applications of medical research. He would often bike across the river to Mass General to shadow surgeons, oncologists, neurologists, and residents, staying on-call overnight at times. “I was interested in observing the relationship between the research I was doing and clinical practice,” he says.

The hours he spent at the hospital spurred his motivation to find new and more effective ways to improve treatments using the immune system.

“I remember meeting a patient whose cancer had responded to treatment, but whose tumor acquired a resistance mutation, overcoming treatment and growing back,” Akama-Garren says. “Resistance mutations are something I did not know about, at least from lab work, but in clinical practice they are a big problem. Even with advances in targeted therapies, cancers find ways to evade therapy. There really is a need for something better, and these types of observations made me appreciate the potential for immunotherapy.”

As he learned more about biology and immunology through his classes, lab work, and time at the hospital, Akama-Garren began to try on the role of teacher. Through MIT’s Educational Studies Program (ESP), he taught summer and weekend courses on immunology to middle- and high-school students.

“I have seen how much of an impact professors, teachers, and mentors can have on people’s lives, and have had on my life. Over the past 18 years I have had outstanding teachers who not only taught me facts, but also inspired me to approach the world with curiosity,” he says. “My goal through ESP was to get kids excited about something, to get them motivated and pass on the curiosity my teachers gave me. In this regard, teaching provides an opportunity to give back.”

Akama-Garren spends countless hours in lab, in the hospital, working as editor-in-chief of the MIT Undergraduate Research Journal, and volunteering — all activities close to his heart. But the time he feels most at home is when he’s with the hockey team, from 5-7 p.m. every day of the week. He’s been a member since his freshman year and is now president of the team. “The people on the team are among my closest friends at MIT,” Akama-Garren says.

And he loves the ice. “I think we’re really lucky here at MIT. We have an ice rink in the middle of campus that the school provides for — that’s hard to find at many other schools,” Akama-Garren says.

While he may live in the moment on the ice, in other aspects of his life, Akama-Garren is constantly working toward a better future. As he talks about the potential of immunology to combat cancer and other diseases, his excitement is eminently tangible. At Oxford next year, he will pursue an MSc in integrated immunology; after that, he hopes to pursue an MD-PhD and, one day, lead his own lab.

“Pushing things forward and coming up with creative ideas that can be channeled into scientific discoveries and hopefully therapies is something Tyler does really well, and it’s something I hope to do with my life,” Akama-Garren says.