Brazilian researchers show that a combination of inflammatory cytokines in the blood and cannabis use, daily or during adolescence, heightens the odds of developing psychiatric disorders 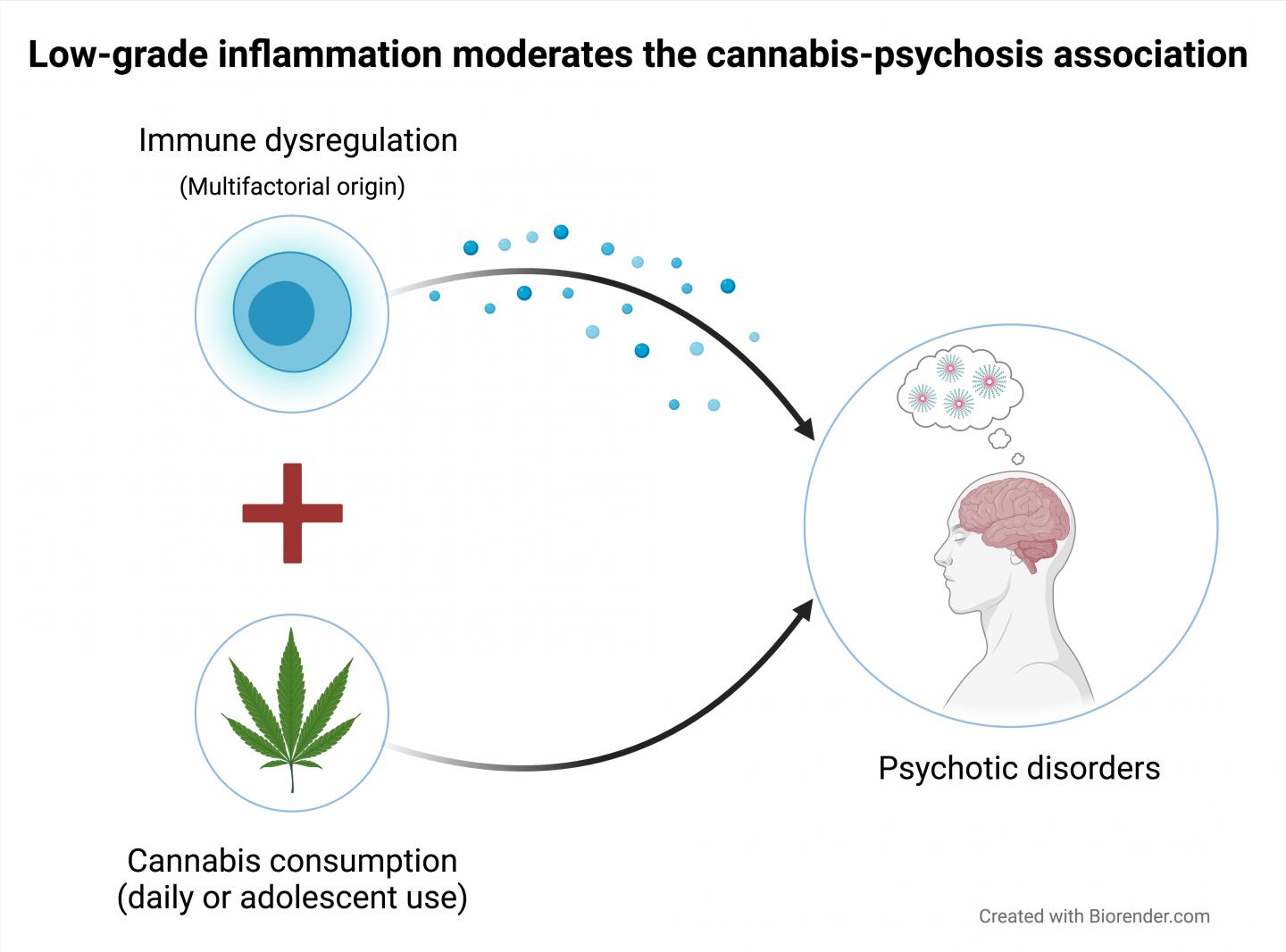 The presence of pro-inflammatory cytokines in the blood can boost the effects of daily cannabis use and heighten the risk of developing psychosis in adulthood. Similar results have been observed, also in the presence of cytokines, when cannabis is used during adolescence. Psychotic disorders have symptoms such as delirium, loss of a sense of reality, hallucinations, hearing voices, and cognitive and social impairments.

A study by researchers at the University of São Paulo’s Ribeirão Preto Medical School (FMRP-USP) in Brazil, reported in an article in the journal Psychological Medicine, finds for the first time that individuals exposed to a combination of these two factors – the presence of pro-inflammatory cytokines in the blood and cannabis use (either daily or during adolescence) – are more likely to suffer from psychosis than those who are exposed to neither or to only one. According to the authors, the study provides “the first clinical evidence that immune dysregulation modifies the cannabis-psychosis association”.

The study was part of a project conducted by the European Network of National Schizophrenia Networks Studying Gene-Environment Interactions (EU-GEI), a consortium of research centers in 13 countries, including Brazil. An article published in The Lancet Psychiatry by the consortium in 2019 showed that daily cannabis use increased the likelihood of suffering from a psychotic disorder threefold.

In the more recent study, the researchers analyzed data for 409 people aged 16-64, including patients experiencing their first psychotic episode and community-based controls. The sample was drawn from the populations of Ribeirão Preto and 25 other cities in the region. The variables analyzed included cannabis use frequency (daily, not daily or never), duration (five years or less), and onset age (in adolescence or later).

In addition to the questionnaire on cannabis use, the researchers measured various cytokines in plasma donated by the volunteers and calculated scores representing their systemic inflammatory profiles. They also collected clinical and socio-demographic data, especially variables known as confounders, such as age, gender, schooling, ethnicity, body mass index, smoking, and use of psychoactive substances. The results obtained were independent of confounding factors.

“Not everyone who uses cannabis develops psychosis. This suggests that the association may be modified by other factors, which may be biological, genetic or environmental,” said Fabiana Corsi-Zuelli, first author of the article. “In a previous study conducted as part of my master’s research, we identified a correlation between plasma cytokines and the first psychotic episode. Following up on this discovery, and the consortium’s recent publication showing a higher incidence of psychosis among subjects who used cannabis on a daily basis, our next step was to see if the biological factor [inflammatory profile] affected the link between cannabis use and psychosis.”

The main conclusion was that such a link did indeed exist. “We found a statistically significant correlation between inflammatory profile and cannabis use on a daily basis or during adolescence. In sum, the results showed that immune system dysfunction can modify the association between cannabis use and psychosis and that a combination of these two factors increases the odds of suffering from a psychotic disorder,” she said.

Corsi-Zuelli is currently a PhD candidate in FMRP-USP’s graduate program in neurology and neurosciences, with support from São Paulo Research Foundation – FAPESP.

The principal investigator for the project is Cristina Marta Del-Ben, a professor at FMRP-USP’s Department of Neurosciences and Behavioral Sciences. According to Del-Ben, risk factors for psychosis may be biological, including genetic predisposition and problems during pregnancy, as well as environmental, including traumatic experiences during childhood and adolescence, and exposure to psychoactive substances, especially cannabis.

“The mechanisms of the disorder are poorly understood,” she said. “Our findings show that frequent current use of cannabis or use of the drug in adolescence is a risk factor for psychosis. We didn’t detect the same correlation with occasional or recreational use. In the multicenter study, which included European cities with varying levels and types of cannabis availability, we also found that the risk of psychosis is greater in users of stronger cannabis strains with a THC content or 10% of higher.” THC (delta-9-tetrahydrocannabinol) is the primary psychoactive constituent of cannabis or marijuana.

The medical explanation of psychosis is that it is a neuropsychiatric syndrome associated with anatomical and functional alterations in the brain, possibly linked to changes in the action of dopamine, a key neurotransmitter for communication among neurons. Excessive dopamine or direct damage to certain brain regions can lead to hallucinations, delusions, delirium and disorganized behavior.

Other neurotransmitters, such as glutamate, have also been implicated in the neurobiology of psychosis. Specialists are currently discussing what they call the neuroimmune link, and how immune system dysregulation may trigger neurochemical, morphological and behavioral alterations that heighten the risk of developing psychiatric disorders.

Psychotic symptoms may be present in several psychiatric disorders, which may or may not be affective. Recent research has taken note of cases of psychosis in patients infected by SARS-CoV-2. Treatment of psychosis involves a combination of medication, psychotherapy and family support.

According to Corsi-Zuelli, the origin of the inflammatory alterations involved in psychosis is still obscure, but it may arise from a combination of genetic and environmental factors. “The inflammation seen in psychiatric disorders is considered low-level and isn’t as severe as in patients with autoimmune diseases or sepsis,” she said. “Nevertheless, experimental studies suggest it entails sufficient dysregulation to produce neurochemical and behavioral alterations.”

The researchers plan next to study genetic variants associated with the immune system and use neuroimaging data to explore the link with environmental risk factors. “Focusing in this way on the interactions between genetics and the environment will help us understand the neurobiology of psychosis, especially the role played by the immune system,” she said.

The association between inflammation and psychiatric disorders is highly relevant to clinical practice and has received growing attention. “It’s important to the search for alternative treatments for these disorders, and also to answering often neglected questions relating to the physical health of psychiatric patients,” Corsi-Zuelli said.

According to Del-Ben, in the pipeline for next steps is a partnership with Geraldo Busatto Filho, a professor at the Medical School (FM) in USP’s main campus, to investigate whether inflammatory markers in blood are linked to brain alterations in some of the patients studied.

The research has twice received international recognition. The Society of Biological Psychiatry selected the study for its Predoctoral Scholars Award, which was to have been formalized at SOBP’s 2020 annual meeting in New York, but the pandemic forced a postponement until April 2021, when the meeting was held online. And the study was selected by the Schizophrenia International Research Society (SIRS) for presentation at its 2020 Congress, also held online.