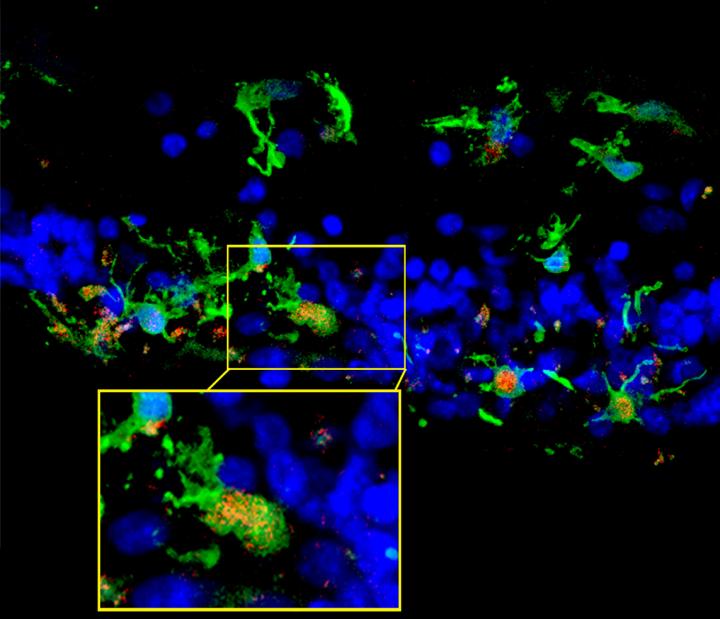 A new study shows that the complement system, part of the innate immune system, plays a protective role to slow retinal degeneration in a mouse model of retinitis pigmentosa, an inherited eye disease. This surprising discovery contradicts previous studies of other eye diseases suggesting that the complement system worsens retinal degeneration. The research was performed by scientists at the National Eye Institute (NEI), part of the National Institutes of Health, and appears in the Journal of Experimental Medicine.

Retinitis pigmentosa is an incurable and unpreventable blinding eye disease that affects 1 in 4,000 people.

“Much research is devoted to studying therapies that attempt to alter the immune system’s role in inherited diseases such as retinitis pigmentosa because such treatments would have broad applicability, regardless of a patient’s causative mutation,” said the study’s principal investigator Wai T Wong, M.D., Ph.D., chief the Neuron-Glia Interactions in Retinal Disease Section at NEI.

In previous studies, activation of the complement system, which mediates some aspects of inflammation, worsens damage in age-related macular degeneration (AMD), a leading cause of blindness in people age 65 years and older.

“The current study involving retinitis pigmentosa underscores the notion that the complement system may in fact exacerbate or curb retinal degeneration depending on the context. Appreciating this complexity is important for guiding the development of therapies that target the complement immune system to treat degenerative diseases of the retina,” Dr. Wong said.

Sean Silverman, Ph.D., an NEI postdoctoral researcher in Dr. Wong’s lab and the lead author on the study, and colleagues monitored the genetic expression of the complement system in a transgenic mouse model of retinitis pigmentosa. They found that upregulation of complement expression and activation coincided with the onset of photoreceptor degeneration. What’s more, this upregulation occurs in the exact location of the degeneration.

“Having found complement at the scene of the crime, we then wanted to know whether it was helping or hurting the degenerative process,” Dr. Wong said.

Using the retinitis pigmentosa mouse model, the researchers examined the role of C3 and CR3, the central component of complement and its receptor, by comparing mice with genetically ablated C3 or CR3 to mice with normal expression. They found that the absence of C3 or CR3 made degeneration worse. Rod photoreceptors, the light-sensing cells that die off first in retinitis pigmentosa, were precipitously lost along with a surge in the expression of neurotoxic inflammatory cytokines.

They pieced together that C3 gets secreted by microglia, trash-collecting cells that in a healthy retina clear away dead cells by phagocytosis to keep the tissue working properly. Once secreted, C3 lands on dead photoreceptors labeling them for destruction and removal. The receptor, CR3, recognizes the C3 markers and conveys the information to microglia. “Breakdown of this C3-CR3 interaction results in a decreased ability of microglia to phagocytose dead photoreceptors, which then accumulate in the retina, stimulating greater inflammation and degeneration,” Dr. Wong said. “Degeneration accelerates pretty quickly.”

When placed alongside each other in a dish, microglia from C3- or CR3-ablated retinas turned out to be toxic to photoreceptors.

Taken together, the results show that in the context of retinitis pigmentosa, complement activation is actually helpful for clearing away dead cells and maintaining a state of homeostasis, a physiological balance, in the retina.

However, in the context of AMD, harmful effects observed from complement activation have spurred clinical trials testing complement inhibitors. “Our findings suggest that this approach may be appropriate for some disease scenarios, but may induce complex responses in other disease scenarios by inhibiting helpful and homeostatic functions of inflammation,” Dr. Wong said.

Further research is needed to complete the picture of how, and under what circumstances, complement activation has beneficial or harmful effects on photoreceptors and disease progression.

This press release describes a basic research finding. Basic research increases our understanding of human behavior and biology, which is foundational to advancing new and better ways to prevent, diagnose, and treat disease. Science is an unpredictable and incremental process– each research advance builds on past discoveries, often in unexpected ways. Most clinical advances would not be possible without the knowledge of fundamental basic research.

About the National Institutes of Health (NIH): NIH, the nation’s medical research agency, includes 27 Institutes and Centers and is a component of the U.S. Department of Health and Human Services. NIH is the primary federal agency conducting and supporting basic, clinical, and translational medical research, and is investigating the causes, treatments, and cures for both common and rare diseases. For more information about NIH and its programs, visit https://www.nih.gov/.