To break down toxic proteins more quickly, immune cells in the brain can join together to form networks when needed. This is shown by a joint study of the University of Bonn, the German Center for Neurodegenerative Diseases (DZNE) and the Institut François Jacob in France. However, in certain mutations that can cause Parkinson’s disease, this cooperation is impaired. The findings are published in the renowned journal Cell. 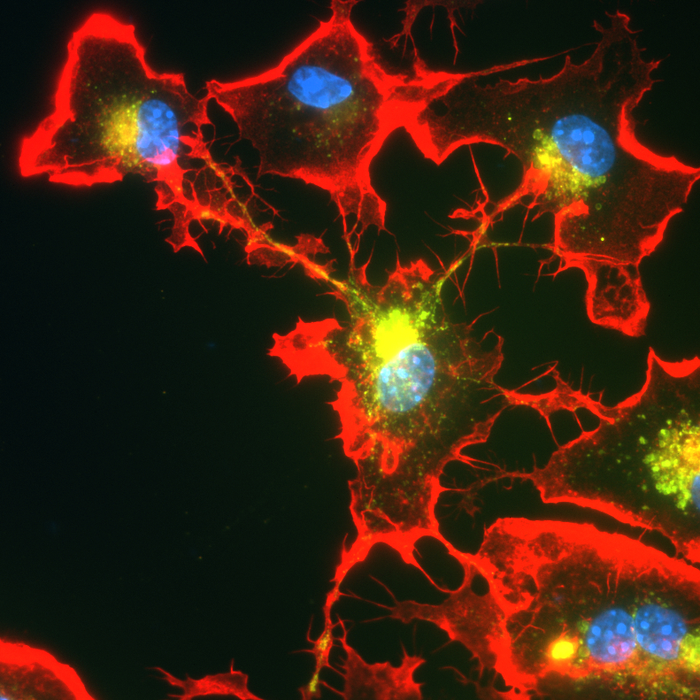 To break down toxic proteins more quickly, immune cells in the brain can join together to form networks when needed. This is shown by a joint study of the University of Bonn, the German Center for Neurodegenerative Diseases (DZNE) and the Institut François Jacob in France. However, in certain mutations that can cause Parkinson’s disease, this cooperation is impaired. The findings are published in the renowned journal Cell.

The protein alpha-synuclein (abbreviated aSyn) performs important tasks in the nerve cells of the brain. But under certain circumstances, aSyn molecules can clump together and form insoluble aggregates. These damage the neurons; they are for instance typically found in the brains of people suffering from Parkinson’s disease or Lewy body dementia.

The immune cells of the brain, the microglial cells, therefore try to break down and dispose of the aSyn aggregates. This process is not only time-consuming; it can also cause the microglial cells themselves to perish. “We have now identified a mechanism that addresses both problems,” explains Prof. Dr. Michael Heneka. The researcher is director of the Department of Neurodegenerative Diseases and Geriatric Psychiatry at the University Hospital Bonn and conducts research there and at the DNZE on neurodegenerative diseases such as Parkinson’s and Alzheimer’s disease.

The research suggests that microglial cells may spontaneously join together in order to better cope with threats. For this purpose, they form tube-like projections that dock onto neighboring microglial cells. These connections are then used to distribute the aSyn aggregates among the partners in the network. Without this division of labor, individual immune cells would have to shoulder a major part of the degradation work and would be overwhelmed.

Joining forces prevents that from happening. However, the connecting tubes also serve another purpose: Microglial cells can use them to give their neighbors a boost when they are in too much distress or indeed in mortal danger. “They then send mitochondria to neighboring cells that are busy breaking down the aggregates,” explains Heneka’s colleague Dr. Hannah Scheiblich. “Mitochondria function like little power plants; so they provide extra energy to the stressed cells.”

In certain mutations, which are found more frequently in Parkinson’s disease patients, both aSyn and mitochondrial transport are impaired. A similar situation applies to another disease in which the degradation of aSyn is impaired: Lewy body dementia. Researchers have isolated certain immune cells, the macrophages, from blood samples of affected individuals. These can be converted into microglia-like cells with the help of specific regulatory molecules. “These were still able to form networks in the lab. However, the transport of aSyn through the connecting tubes was severely impaired,” says Heneka, who is also a member of the Cluster of Excellence Immunosensation2 and the transdisciplinary research area “Life & Health”.

The fact that microglial cells can join together was previously unknown. “We have opened the door to a field that will certainly engage researchers for many years to come,” Heneka emphasizes. In the medium term, this may also open up new therapeutic perspectives for neurological disorders such as Parkinson’s disease or dementia.

In addition to the University of Bonn and the DZNE, the Institut François Jacob (France) and the University of Massachusetts (USA) were involved in the study. The work was supported by the German Research Foundation (DFG/Cluster of Excellence Immunosensation), the EU Joint Program on Neurodegenerative Diseases (JPND), the EU Horizon 2020 Research and Innovation Program, the European Federation of Pharmaceutical Industries and Associations (EFPIA), the non-profit Hertie Foundation in Germany, and Parkinson UK.