Using an innovative new imaging technique, researchers at Weill Cornell Medicine have revealed the inner workings of a family of light-sensing molecules in unprecedented detail and speed. The work could inform new strategies in the burgeoning field of optogenetics, which uses light pulses to alter the activity of individual neurons and other cells. 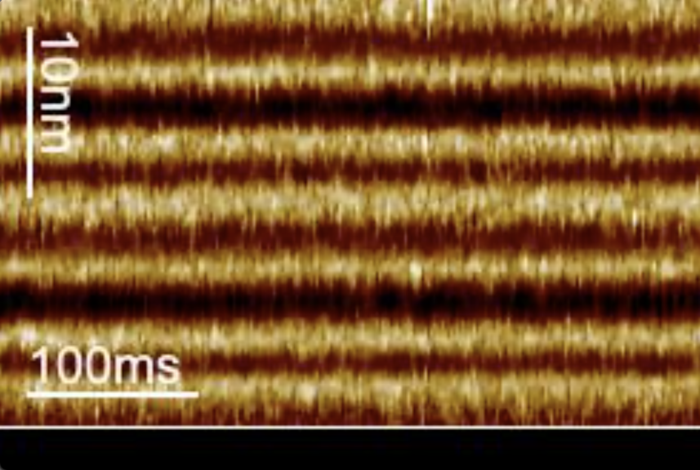 Using an innovative new imaging technique, researchers at Weill Cornell Medicine have revealed the inner workings of a family of light-sensing molecules in unprecedented detail and speed. The work could inform new strategies in the burgeoning field of optogenetics, which uses light pulses to alter the activity of individual neurons and other cells.

Light-sensitive proteins drive many crucial processes in biology, ranging from photosynthesis to vision. Much of the science community’s understanding of these proteins comes from studies on bacteriorhodopsin, a protein responsible for photosynthesis in certain single-celled organisms. Researchers have previously solved the three-dimensional structure of bacteriorhodopsin and studied its activity in detail, but the limitations of available techniques left puzzling gaps in the resulting models.

The new study, published Dec. 10 in Nature Communications, describes a technique developed by the investigators, called line-scanning high-speed atomic force microscopy, that captures the motions of bacteriorhodopsin in response to light on a millisecond time scale.

“The solution of protein structures has become quite straightforward,” said senior author Dr. Simon Scheuring, professor of physiology and biophysics in anesthesiology at Weill Cornell Medicine. “But a current challenge is to assess kinetics, which provide a dynamic understanding of the system.”

In particular, other methods that track the activity of individual molecules operate too slowly to reveal how the protein changes shape over short time periods, as bacteriorhodopsin appears to do in response to light. Dr. Scheuring compares these techniques to a movie camera with a slow shutter, which might capture a fast-moving bird at one side of the screen and then the other but be unable to track it in between those two points.

Previously, researchers have tackled that problem by handicapping the bird: looking at variant forms of bacteriorhodopsin. “Up to now, to study the kinetics of bacteriorhodopsin, people were using mutants that were slower,” said lead author Dr. Alma Perez Perrino, a postdoctoral fellow in Dr. Scheuring’s laboratory. The slower variants don’t represent the normal activity of the protein, though. To address that, Dr. Perez Perrino and her colleagues developed line-scanning high-speed atomic force microscopy, which sacrifices some image detail for a much faster frame rate, like taking blurrier images of the bird in order to follow it all the way across the screen.

“We are tracking the protein every 1.6 milliseconds, so we could explore the speed of the wild-type bacteriorhodopsin,” said Dr. Perez Perrino.

In response to light, bacteriorhodopsin switches between open and closed states. Using their faster imaging technique, the researchers discovered that the transition to the open state and the duration of the open state always happen at the same speed, but the molecule remains in the closed state for longer periods as the intensity of the light decreases.

Optogenetics researchers insert genes for light-sensing molecules in neurons or other cells, enabling them to change the cells’ behavior with light pulses. That work has revolutionized neuroscience, and holds potential for treating neurological diseases as well. The more researchers know about light-sensing proteins, the further they’ll be able to push optogenetics. “Ultimately, you want to switch on a process, then get the maximum out of it, and be able to switch it off again immediately,” said Dr. Scheuring. “So, it is very important to know the kinetics of the molecules for that switching.”