CHICAGO—November 18, 2022—Illinois Institute of Technology has joined a multistate, public-private coalition of 50 members dedicated to combating climate change with clean hydrogen technology. The Midwest Alliance for Clean Hydrogen (MachH2) will submit an application to the U.S. Department of Energy to develop a regional clean hydrogen production and distribution hub, with up to $8 billion to be funded under the Infrastructure Investment and Jobs Act. Under the Act, DOE will invest to catalyze investment “to form the foundation of a national clean hydrogen network that will contribute substantially to decarbonizing multiple sectors of the economy.” 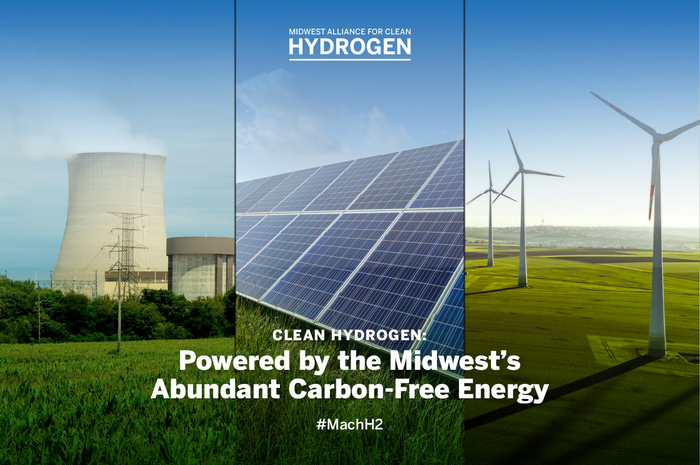 CHICAGO—November 18, 2022—Illinois Institute of Technology has joined a multistate, public-private coalition of 50 members dedicated to combating climate change with clean hydrogen technology. The Midwest Alliance for Clean Hydrogen (MachH2) will submit an application to the U.S. Department of Energy to develop a regional clean hydrogen production and distribution hub, with up to $8 billion to be funded under the Infrastructure Investment and Jobs Act. Under the Act, DOE will invest to catalyze investment “to form the foundation of a national clean hydrogen network that will contribute substantially to decarbonizing multiple sectors of the economy.”

MachH2 is a multistate coalition of public and private entities representing every phase in the hydrogen value chain. The alliance includes a cross-section of carbon-free energy producers, clean energy developers, hydrogen technology providers, utilities, major manufacturers, national labs and leading hydrogen technology development and deployment institutions, world-class universities, and groups focused on environmental justice. Each member shares a commitment to promoting equity and furthering the administration’s Justice 40 goals through the development of the hub. The Midwest’s location at the crossroads of America and its strong transportation infrastructure make it ideally suited for supplying clean hydrogen nationwide.

Members of the alliance will combine resources and expertise to:

Hydrogen is the most abundant element in the universe. When made with clean energy, it is an essential resource in meeting our nation’s goal of achieving net zero emissions by 2050. The hub will employ electrolysis technology to separate the hydrogen and oxygen molecules in water. As an energy source, hydrogen does not emit carbon and can be used to reduce emissions from multiple difficult-to-decarbonize sectors of the economy, including aviation, steelmaking, agriculture, and long-haul transportation.

Hydrogen projects already proposed by alliance members will support an estimated 4,500 construction jobs and 400 permanent positions once complete. Total construction spending is estimated at nearly $4 billion, including $1.7 billion in wages and $65 million to $70 million in state income taxes. The 400 permanent positions will generate an estimated $60 million in wages annually — or roughly $900 million over the 15-year operating life of the projects – and an additional $35 million to $40 million in state income taxes. More projects may be added as the hub continues to develop, leading to further economic benefits for the region.

The alliance is united in a shared vision to create an immediately scalable hydrogen hub in the Midwest that uses the region’s abundant nuclear and renewable power to create a clean hydrogen economy and reduce emissions across multiple heavy emitting sectors. The alliance also is committed to leveraging the clean energy transition to create opportunities in disadvantaged communities through outreach and workforce development initiatives engaging diverse populations. In addition to a cleaner environment and improved air quality, jobs will be created through the development of clean hydrogen infrastructure and related businesses driven by the hub. Engaging communities early in the process of developing hub infrastructure is a key priority for alliance members.

“The MachH2 coalition is the result of outstanding effort of numerous public and private partners—including our universities, clean energy developers, transportation companies, manufacturers, and partners in other states—to develop a nation leading clean hydrogen economy in the Midwest,” said Illinois Governor JB Pritzker. “The development of a robust clean hydrogen economy in Illinois will build on our decarbonization efforts in CEJA, particularly in hard to decarbonize sectors, while creating jobs, spurring infrastructure development throughout Illinois, and meeting the environmental justice goals of my administration.”

“The Midwest Alliance for Clean Hydrogen is a bold project to reduce air pollution and CO2 emissions from industry and transportation through deployment of clean hydrogen,” said Michigan Governor Gretchen Whitmer. “Through partnerships with Michigan partners like the American Center for Mobility, Flint MTA, and the Port of Detroit, MachH2 will create good-paying jobs and reduce air pollution and CO2 emissions, helping Michigan deliver on our Healthy Climate Plan goals.”

“We must transition to more sustainable, cleaner fuels and forms of energy if we hope to pass on a livable planet to our kids and grandkids. In passing the Infrastructure Investment and Jobs Act, I pushed for funding to support the future of a clean energy economy,” said U.S. Senator Dick Durbin. “With so many expert Illinois organizations collaborating on MachH2, I am confident that this Regional Clean Hydrogen Hub proposal will make for a sound investment for the Department of Energy. Hydrogen promises to play a critical role in decarbonizing the transportation sector, and MachH2 demonstrates that Illinois stands ready to deliver on that promise.”

“With Illinois’s robust array of thought leaders, world-class institutions and innovative laboratories, it only makes sense that our great state should be home to the Midwestern Hydrogen hub,” said U.S. Senator Tammy Duckworth. “Illinois’s leadership in clean energy combined with the Bipartisan Infrastructure Law’s clean energy provisions is a recipe for positive change to our energy economy and a better protected environment for years to come.”

“Illinois is home to a robust nuclear energy sector and is a leader in renewable energy resources,” said Representative Darin LaHood. “As our nation navigates growing energy challenges, Illinois will play a critical role in supporting an all-of-the-above energy approach that restores American energy independence and strengthens our economy. With strong collaboration from many of Illinois’ leading institutions, MachH2 would make an excellent choice for the Department of Energy’s Midwestern Clean Hydrogen Hub.”

To learn more about the alliance, you can read more in its bid announcement here.