URBANA, Ill. – Rivers split across mountaintops and other geographic barriers may flow only a few miles from one another, but to the aquatic creatures in those waters, the separation could represent millions of years of evolutionary time. So, when an angler or a curious child moves a fish from one side of the mountain or one side of the country to the other, it’s a very big deal to the fish. Some may discover a competitive advantage in a new stream, potentially disrupting eons-old ecological hierarchies. 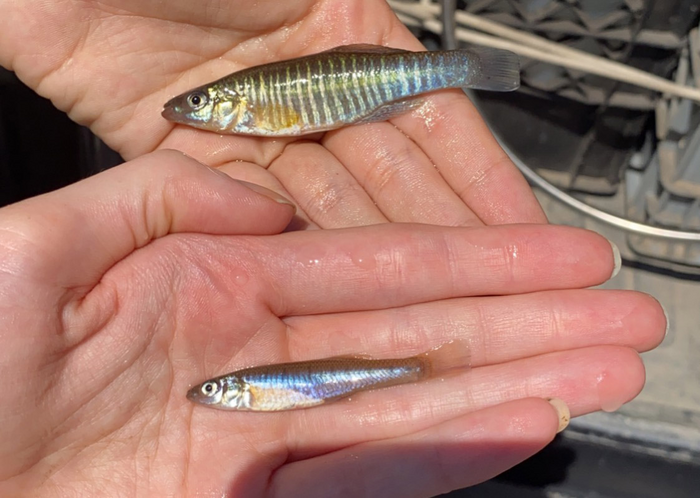 URBANA, Ill. – Rivers split across mountaintops and other geographic barriers may flow only a few miles from one another, but to the aquatic creatures in those waters, the separation could represent millions of years of evolutionary time. So, when an angler or a curious child moves a fish from one side of the mountain or one side of the country to the other, it’s a very big deal to the fish. Some may discover a competitive advantage in a new stream, potentially disrupting eons-old ecological hierarchies.

In the U.S. Geological Survey’s Non-Indigenous Aquatic Species database, these so-called “native transplant” fish are almost twice as common as fish introduced from outside the country. But a new University of Illinois review says native transplant fish, especially those that don’t qualify as game fish, are rarely studied and their impacts poorly understood.

“We are trying to circle a certain type of biological invasion as uniquely neglected for study and attention over time. It leaves us with some blind spots about whether these fish are having impacts, and if they’re causing harm that’s going undocumented,” says Eric Larson, associate professor in the Department of Natural Resources and Environmental Sciences at Illinois and senior author on the review in Fisheries.

Larson and lead author Jordan Hartman scoured the scientific literature to document studies on non-game native transplant (NGNT) fish. Of 220 NGNT fishes the authors identified as established in the U.S., only 51 have been studied at all. And researchers have investigated impacts in just 30 of them.

Larson says those impacts can be significant.

“For example, when the Western mosquitofish was introduced in places with rare endemic desert fish, it had strong population-level effects resulting in Endangered Species Act listings and an elevated risk of extinction in those species. And native transplants like sea lamprey or rainbow smelt affect game fish in the Great Lakes,” he says. “With this review, we’re posing the question: Just how confident are we that the Western mosquitofish or the rainbow smelt are outliers?”

“In invasive species research, there’s a big focus on population and community-level impacts,” she says. “That appears to be true for NGNT fish, as well. These fish could be having effects on the genetic level, in terms of hybridization with related fish, or on the whole-ecosystem level, such as nutrient cycling of the system. But based on the available studies, we simply don’t know.”

Unlike game fish, which are intentionally stocked into lakes and streams, NGNTs are typically moved by anglers dumping bait buckets after a day of fishing, through contaminated fish stocking, or when aquarium hobbyists release pets in nearby streams.

Take the Eastern banded killifish. Likely introduced to Illinois waters from eastern states via bait buckets and contaminated fish stocking, the small fish may be edging out or hybridizing with the Western banded killifish, a state-listed threatened Illinois native. Hartman is studying the two subspecies as NGNT poster children.

“Since they were first detected in 2000, Eastern banded killifish have spread along the coast of Lake Michigan, through the Illinois River and all the way to the Mississippi River. They have really traveled quickly across the state. And we’re not sure what their impacts are. That is where my research comes in,” she says. “I’m looking at whether the Eastern and Western are hybridizing and what that could mean for the Western banded killifish that is already threatened in the state. If they start hybridizing, are we losing the genes of the Western?”

Part of the issue is the way state and federal agencies regulate invasive species. Many agencies specifically prohibit non-native species, with absent or ambiguous definitions of what qualifies for regulation. And because native species remain unnamed in most state lists, there’s no regulatory instrument to motivate or support eradication efforts.

Larson and Hartman challenge state and federal agencies to push back against the assumption that fish native to the contiguous U.S. are inherently harmless. But in the meantime, they say anglers, aquarium hobbyists, and others can help prevent NGNT invasions.

“If you’re taking bait fish out of a watershed, don’t dump it in a different watershed. And be really careful not to release any aquarium fish into local waters,” Hartman says.

Larson adds, “Not releasing organisms is tricky with freshwaters because of the geographic scale of where invasion can occur. People don’t realize these drainage divides can form really isolated communities. Even driving 20 miles down the road and releasing live bait might represent a giant jump in the distribution of those organisms.”

The review, “Overlooked invaders? Ecological impacts of non-game, native transplant fishes in the United States,” is published in Fisheries [DOI: 10.1002/fsh.10864]. The study was funded by a Jonathan Baldwin Turner Fellowship from the College of Agricultural, Consumer and Environmental Sciences at the University of Illinois Urbana-Champaign.