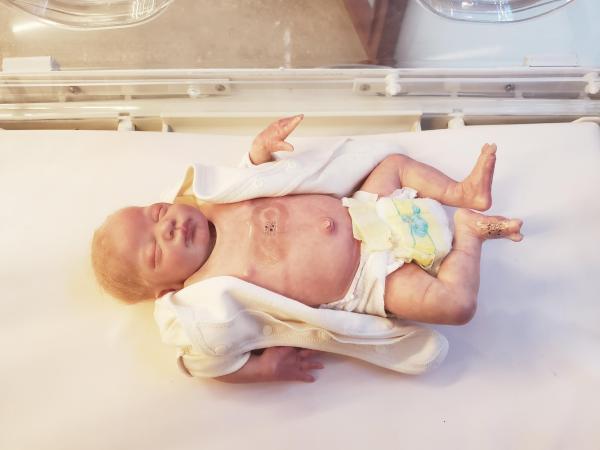 The bond between a parent and their child is forged within the first few weeks of life. The nurse places the baby in their parents’ arms where it will be comforted and rocked for countless hours of their newborn life. For parents whose babies are born premature or with complications, these bonds are harder to establish as the baby needs to be hooked up to a variety of wires to be constantly monitored. Illinois professor Naresh Shanbhag is part of a team, led by former Illinois professor John Rogers, working to replace the wires with a patch that would allow parents to hold their little one while it’s being monitored.

When a baby is placed into a neonatal intensive care unit (NICU), its vitals are continuously recorded through electrodes placed on the skin with wires attached to monitoring platforms. Explained in-depth in this article, published in the journal Science.

“Wired electrodes with their rigid interfaces can hurt the baby’s tender skin,” said Shanbhag, the Jack S. Kilby Professor of Electrical and Computer Engineering. “They make it hard for parents to hold their child or to adjust their position. Today’s health monitoring systems present a barrier in establishing parental and neonate connection, which can delay or inhibit the baby’s growth.”

This project emerged as a collaboration between Shanbhag and Rogers within the SONIC (Systems on Nanoscale Information fabriCs) Center. The group was formed to develop Shannon and brain-inspired models of computation for designing intelligent systems in emerging nanoscale technologies. One of the key research outcomes of the SONIC center was the concept of bringing computation to the sensor (in-sensor computing) in order to eliminate the energy cost of data transfer. Shanbhag and Rogers’ project was one of the many successful SONIC projects in the area of in-sensor computing.

“Our goal was to replace the current monitoring technology with an alternative that could yield the same accuracy, precision and measurement while taking away the disadvantages of the tapes and the wires,” said Rogers, currently the Louis Simpson and Kimberly Querrey Professor of Materials Science and Engineering, Biomedical Engineering and Neurological Surgery at Northwestern University. “We worked in close collaboration with medical doctors and CSL to figure out a better way.”

The group developed a wireless, battery-free sheath that can be laid on the skin and then gently peeled off when needed. The paper-thin patch is the combination of four technologies: wireless power and data transfer, efficient onsite data analytics, time-synchronized data streaming from multiple sites, and enabling visual inspection of the skin interface while also allowing magnetic resonance imaging and x-ray imaging of the neonate.

The ability to wirelessly transfer power was crucial. Wires were part of the problem with conventional monitoring and batteries would cause the same issues. In addition to powering itself the patch would need to gather the medical data (temperature, heart rate, electrical heart patterns, blood oxygenation, etc.) and then process the data locally to reduce the amount information that needed to be sent wirelessly to the monitors. This is where Shanbhag and his student Pourya Assem’s algorithms were put to use.

“We developed efficient algorithms to process data in real-time on an on-site microcontroller,” Shanbhag said. “The device has limited computational resources so we had to choose the most information-preserving computations to implement.”

Data is collected through two separate patches on each neonate (NICU patient), generally on the child’s back and then either their chest or foot. Since there is multiple data streams the information must be synchronized before it can be processed and streamed to the monitors. Even with these three other technologies, if the patch gets in the way of the medical staff it won’t be of much use. The patch must also allow staff to observe the skin in addition to allowing for x-rays and magnetic resonance images to be taken.

In order to be sure the patch the researchers created worked it had to be tested. The devices were deployed at the Lori Children Hospital in Chicago on NICU patients whose parents agreed to the research. To make sure they were getting accurate measurements the patches were placed on neonates who were also hooked up to the conventional wired system to compare the data readings. The patients involved in the research were also surrounded by nurses, neonatologists, and dermatologists to ensure everything ran smoothly. So far 90 babies have used the patches and helped validate the patches as a feasible alternative to the current technology.

“The NICU in particular is an area that urgently needs new technology,” said Rogers. “Everyone – nurses, parents, neonatologists – agrees on this point. The transition to a wireless approach represents an attractive solution, but also a daunting engineering challenge, given the fragility of the patient population and the extreme requirements in data precision and operational reliability.”

Use of the devices has expanded to a NICU at Prentice Women’s Hospital, also in Chicago, and NICUs across the globe are reaching out to Rogers and other contributors to deploy the patches at their locations. Later this year 10,000 units will be distributed in Zambia supported by the Gates Foundation and the Save the Children Foundation.

While this is the most visual project coming from former SONIC researchers, it is just one of many that are still being worked on.

“This project demonstrates that combining innovations in materials, sensors, circuits, architectures and algorithms in unique ways can lead to impactful research outcomes,” said Shanbhag. “The future of such technologies has immense possibilities as we seek to harness their potential to enhance wellness and to positively impact lives.”

SONIC was funded by the Defense Advanced Research Projects Agency (DARPA) and the Semiconductor Research Corporation (SRC), brought together a diverse set of 27 faculty and 100+ graduate students from 10 top-tier U.S.-based universities. The SONIC project officially concluded in 2017, the 27 faculty and 100+ graduate students involved have carried on some of the developed projects.

Scienmag Sep 9, 2019
Improving transportation in TexasCredit: UT Arlington A civil engineer at The University of Texas at Arlington…

All things considered, wooden pallets are more eco-friendly than…