NEW ORLEANS—A major intervention against a global hotspot for illegal river gold mining proved to be only narrowly effective at halting environmental degradation in the Madre de Dios region of Peru, according to new research that will be presented on Wednesday, 15 December at AGU Fall Meeting 2021. 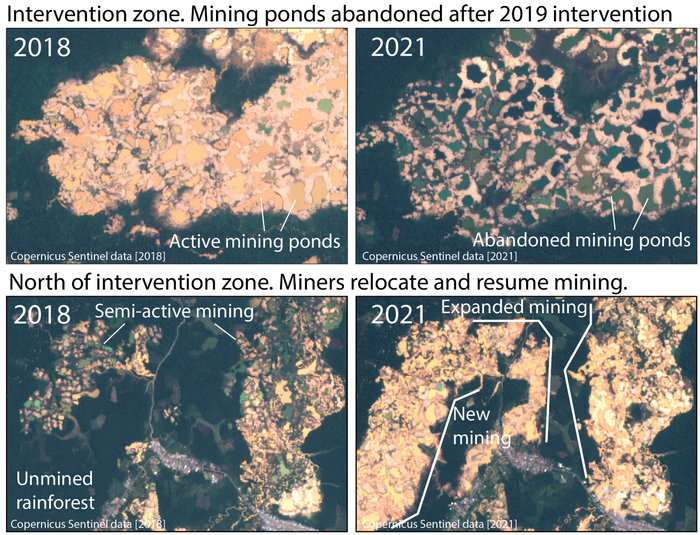 NEW ORLEANS—A major intervention against a global hotspot for illegal river gold mining proved to be only narrowly effective at halting environmental degradation in the Madre de Dios region of Peru, according to new research that will be presented on Wednesday, 15 December at AGU Fall Meeting 2021.

Understanding the effectiveness of this operation can help guide future efforts to address the health and environmental impacts of illegal gold mining across the global tropics, according to the researchers.

In 2019, the Peruvian government carried out a major operation to target illegal gold mining operations, which employ millions of people, in the protected tropical biodiversity hotspot of Madre de Dios in the Amazon basin. By analyzing optical and radar satellite data, researchers found that the intervention succeeded in stopping illegal mining by 70-90% in the protection region but led to a rapid increase in mining in private and public lands outside the targeted zone—in some cases, the mining continued across the highway from the protected region.

While so far, the total active illegal mining area decreased 50% relative to its peak in 2019, the researchers expect that if current patterns continue, rates of mining could reach or eclipse pre-intervention levels. Abandoned mining ponds are still sit inactive in the ecosystem and researchers have seen very little reforestation of these areas.

“Between [the intervention] and COVID, I think we would’ve expected there to be more of a tapering off of the mining activity than there was,” said Evan Dethier, a Postdoctoral fellow in Earth Sciences at Dartmouth and lead researcher on the project. “But instead we’ve observed a major increase in other areas after that initial dampening due to the direct intervention.”

Gold mining causes significant environmental degradation in several ways, acting as the dominant human signal on the landscape. First, land is deforested and converted to create pools of water where miners process soil and sediment. Then, the sediment is washed downstream, affecting species and river regimes.

The mercury used as a critical component to separate gold from surrounding sediment is also released into the environment, creating a concern for human and ecosystem health throughout the affected region.

“The rivers all flow together,” Dethier said. “So mining that continues upstream runs through the areas that were being affected by the preserve and elsewhere. It’s all a continuum and its underscores the challenge of intervening in [one part of] of what is such a key part of the local and regional economy.”

Illegal gold mining occurs in rivers across the global tropics. Addressing the underlying causes is a complex issue, according to Dethier. While the Peruvian government’s intervention could act as a model for other areas where mining may not be as widespread, the economic incentives for mining remain.

“There’s these twin concerns of the environment and then the livelihoods of the people, and then also in many of these places the industry is significant enough that the national governments have an interest in it being active, so it’s very thorny,” Dethier said.

In the future, researchers hope to better understand how both the people and the ecology can move forward in recovering the converted land.

“What’s at the front of our mind is, ‘what’s the pathway to recovery in some of these really profoundly altered regions?’” Dethier said. “That remains to be seen, whether these areas that are now not being mined are going to recover on their own, or if recovery is sort of a complicated and twisted path. Right now, we believe it likely needs to be helped along by targeted remediation efforts.”

Notes for Journalists
Evan Dethier will present the results of this work at AGU Fall Meeting 2021. For information about Fall Meeting 2021, including the schedule of press events, visit the online Media Center. Neither the presentation nor this press release is under embargo.