Identity theft the secret of the cat parasite’s success

The parasite Toxoplasma is carried by a large portion of the global human population. Now a study led by researchers at Stockholm University shows how this microscopic parasite so successfully spreads in the body, for example to the brain. The parasite infects immune cells and hijacks their identity. The study is published in the scientific journal Cell Host & Microbe. 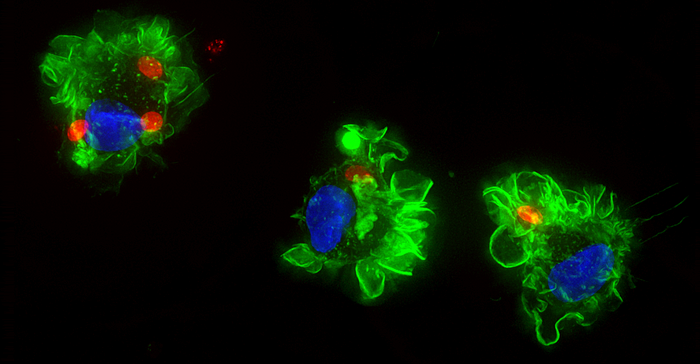 The parasite Toxoplasma is carried by a large portion of the global human population. Now a study led by researchers at Stockholm University shows how this microscopic parasite so successfully spreads in the body, for example to the brain. The parasite infects immune cells and hijacks their identity. The study is published in the scientific journal Cell Host & Microbe.

In order to fight infections, the various roles of immune cells in the body are very strictly regulated. Scientists have long wondered how Toxoplasma manages to infect so many people and animal species and spread so efficiently.

“We have now discovered a protein that the parasite uses to reprogram the immune system”, says Arne ten Hoeve, researcher at the Department of Molecular Biosciences, Wenner-Gren Institute at Stockholm University.

The phenomenon has been described as Toxoplasma turning immune cells into Trojan horses or wandering “zombies” that spread the parasite. The newly published study provides a molecular explanation for the phenomenon, and also shows that the parasite is much more targeted in its spread than previously thought.

“It is astonishing that the parasite succeeds in hijacking the identity of the immune cells in such a clever way. We believe that the findings can explain why Toxoplasma spreads so efficiently in the body when it infects humans and animals,” says Professor Antonio Barragan, who led the study, which was carried out in collaboration with researchers from France and the USA.

About the parasite Toxoplasma and the disease toxoplasmosis:

Toxoplasmosis is probably the most common parasitic infection in humans globally. Toxoplasma also infects many animal species (zoonosis), including our pets. The WHO has estimated that at least 30% of the world’s human population is a carrier of the parasite. Studies indicate that 15-20% of the Swedish population carry the parasite (the vast majority without knowing it). The incidence is higher in several other European countries.

Toxoplasma is spread through food and contact with cats. In nature, the parasite spreads preferentially from rodents to cats to rodents and so forth. The parasites are “sleeping” in the rodent’s brain and when the cat eats the mouse, they multiply in the cat’s intestine and come out via the feces. The parasite ends up in the vegetation and when the rodent eats the vegetation it becomes infected. Humans become infected through meat consumption or through contact with cats, specifically cat feces.

The parasite causes the disease toxoplasmosis. When a person is infected for the first time, mild flu-like symptoms occur that can resemble a cold or a flu. After the first infection phase, the parasite transitions to a “sleeping” stage in the brain and begins a chronic silent infection that can last for decades or for life. The chronic infection usually causes no symptoms in healthy individuals. Toxoplasma can, however, cause a life-threatening brain infection (encephalitis) in people with a weakened immune system (HIV, organ transplant recipients, after chemotherapy) and can be dangerous to the fetus during pregnancy. Eye infections can occur in otherwise healthy individuals.