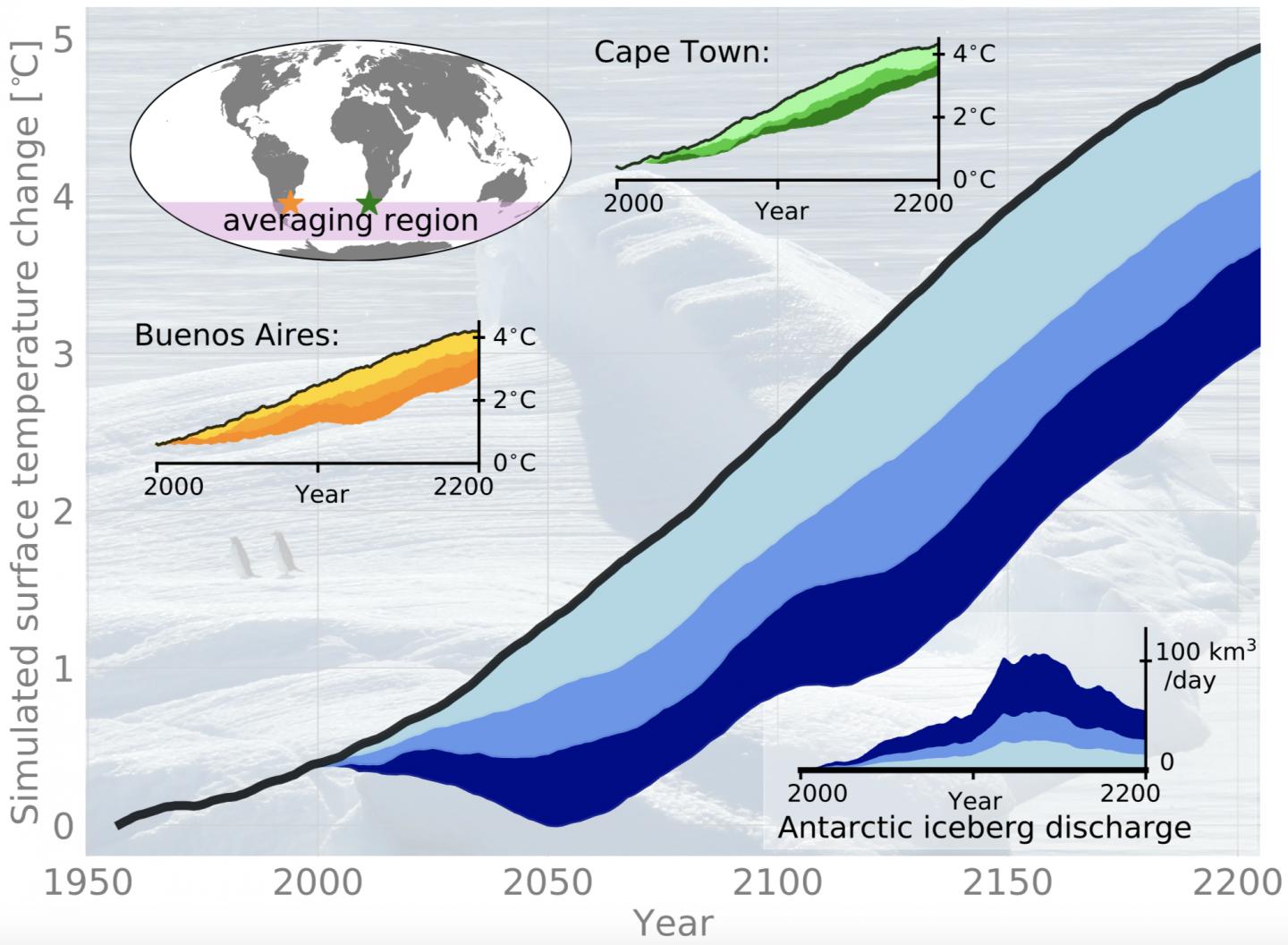 New research, published today in the journal Nature Climate Change, has found that Antarctic icebergs can weaken and delay the effect of Global Warming in the Southern Hemisphere.

Unabated Global Warming threatens the stability of the Antarctic ice sheet. Recent observations reveal a rapid thinning of the Pine Island and Thwaites glacier regions in Antarctica, which can be attributed partly to warming oceans. These findings have raised concerns of an accelerated ice loss of the West Antarctic ice sheet and potential contributions to global sea level rise. Ice loss can occur in the form of melt-induced (liquid) freshwater discharge into the ocean, or through (solid) iceberg calving.

With a projected future retreat of the Antarctic ice sheet, scientists expect an intensification of iceberg discharge. Icebergs can persist for years and are carried by winds and currents through the Southern Ocean until they reach warmer waters and ultimately melt. The melting process cools ocean waters like ice cubes in a cocktail glass. Furthermore, freshwater discharge from icebergs impacts currents by lowering ocean salinity. Whether this “iceberg effect” can slow down or alter future climate change in the Southern Hemisphere has remained an open question.

Climate researchers from the University of Hawaii (USA), the IBS Center for Climate Physics (South Korea), Penn State University (USA) and University of Massachusetts (USA) have now quantified for the first time this effect of Antarctic iceberg calving on future Southern Hemisphere climate. The team ran a series of Global Warming computer simulations, which include the combined freshwater and cooling effects of icebergs on the ocean. The size and number of icebergs released in their model mimics the gradual retreat of the Antarctic ice sheet over a period of several hundred years. By turning on an off the “iceberg effect” in their climate model, the researchers discovered that icebergs can significantly slow down human-induced warming in the Southern Hemisphere, impacting global winds and rainfall patterns.

“Our results demonstrate that the effect of Antarctic melting and icebergs needs to be included in computer model simulations of future climate change. Climate models currently used in the 6th climate change assessment of the Intergovernmental Panel on Climate Change (IPCC) do not account for this process.” says Dr. Fabian Schloesser, lead author of the study in Nature Climate Change.

Dr. Tobias Friedrich, coauthor of the study, adds: “To melt the icebergs released over the 21st century in one of our extreme Antarctic ice-sheet retreat scenarios would require 400 times the current annual world energy consumption. Global sea level would rise by about 80 cm, impacting many coastal regions and communities worldwide.”

Recent studies have suggested that the impact of Antarctic meltwater discharge on the ocean could lead to further acceleration of ice sheet melting and global sea level rise. The present study paints a more complex picture of the underlying dynamics. Including the cooling effect of icebergs largely compensates for the processes that were previously thought to accelerate Antarctic melting.

“Our research highlights the role of icebergs in global climate change and sea level rise. Depending on how quickly the West Antarctic ice sheet disintegrates, the iceberg effect can delay future warming in cities such as Buenos Aires and Cape Town by 10-50 years.” says Prof. Axel Timmermann, corresponding author of the study and Director of the IBS Center for Climate Physics.

The research team plans to further quantify the interplay between ice and climate and its effect on global sea level with a new computer model that they developed.

Scientists transform a BBQ lighter into a high-tech lab device

New insights into the earliest events of seed germination