Coffee and tea are two of the most popular beverages around the world. The extensive consumption of these drinks produces large amounts of coffee grounds and tea leaves, which are typically discarded as waste. These unused biomass resources, however, have the potential to produce several useful chemicals. Tea and coffee contain a group of compounds called polyphenols, which can produce hydrogen peroxide (H2O2). 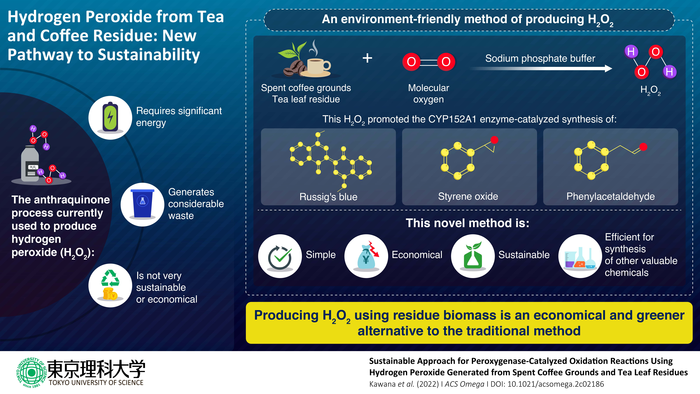 Coffee and tea are two of the most popular beverages around the world. The extensive consumption of these drinks produces large amounts of coffee grounds and tea leaves, which are typically discarded as waste. These unused biomass resources, however, have the potential to produce several useful chemicals. Tea and coffee contain a group of compounds called polyphenols, which can produce hydrogen peroxide (H2O2).

H2O2 has a lot of industrial value; this chemical plays a critical role in the oxidation of several compounds. The oxidation process is typically catalyzed by an enzyme called P450 peroxygenase, but it can’t occur unless H2O2 is present. These oxidation reactions are used to produce many chemicals of note. Now, H2O2 is currently produced through an unsustainable method called the anthraquinone process, which is not only energy-intensive but also produces a lot of waste, highlighting the need for a greener, environmentally friendly alternative. While there are other methods which use enzymes or light to produce H2O2, these are expensive because they require catalysts and additional reagents.

“Given their polyphenol content, we predicted that SCG and TLR could be used to produce hydrogen peroxide,” says Dr. Furuya. Proving their prediction to be true, their study—published in ACS Omega on June 1, 2022—details their successful production of H2O2 using these underutilized biomass resources.

The team’s production method involved adding coffee grounds and tea leaves to a sodium phosphate buffer, then incubating this solution while shaking it. In the presence of the buffer, SCG and TLR interacted with molecular oxygen to produce H2O2.

The team also explored the scope of using this H2O2 to synthesize other chemicals of industrial importance. The newly-synthesized H2O2 aided in the production of Russig’s blue. Moreover, in the presence of peroxygenase (an enzyme that catalyzes an oxidation reaction using H2O2), TLR- and SCG-derived H2O2 was allowed to react with a molecule called styrene to produce styrene oxide—which has several applications in medicine—and another useful compound, phenylacetaldehyde.

These results prove that the team’s new approach of using SCG and TLR to produce H2O2 proved to be simple, cost-effective, and environmentally friendly, compared to the traditional anthraquinone process. Hailing these promising results, Dr. Furuya says, “Our method can be used to produce hydrogen peroxide from materials that would otherwise have been discarded. This could further result in new ways to synthesize industrial chemicals like styrene oxide, opening up new applications for these unused biomass resources.”

These findings thus open up a new way towards the sustainable production of H2O2, from the most unexpected sources: tea and coffee waste!

About Tokyo University of Science

About Associate Professor Toshiki Furuya from Tokyo University of Science

Dr. Toshiki Furuya is an Associate Professor in the Faculty of Science and Technology of the Department of Applied Biological Science. He completed his graduation and post-graduation from Waseda University in Tokyo, Japan. Prof. Furuya has won many awards including the 24th Excellent Paper Award, Society of Biotechnology in 2016. His areas of research include applied biochemistry, microbial metabolism, enzyme catalysis, bioproduction, and bioremediation.