Hunting for dark galaxies with FAST

A large-scale neutral hydrogen (HI) survey of the local universe is one of the major science initiatives under the Five-hundred Meter Aperture Spherical radio Telescope (FAST) project. 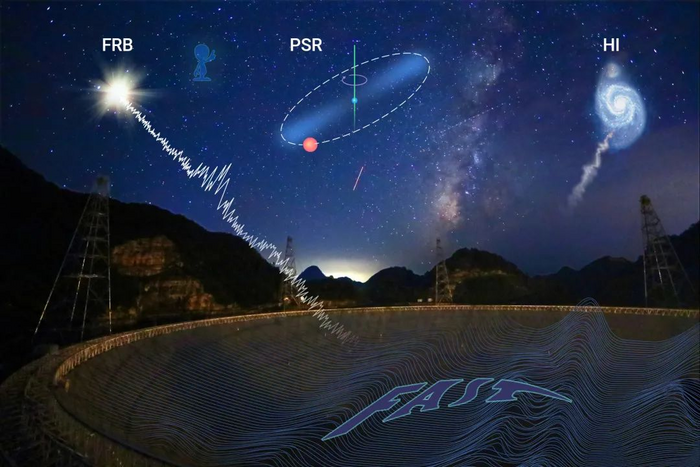 A large-scale neutral hydrogen (HI) survey of the local universe is one of the major science initiatives under the Five-hundred Meter Aperture Spherical radio Telescope (FAST) project.

Equipped with a 19-beam array receiver and combined with super-high sensitivity owing to its large collection area, FAST is the most powerful survey tool for exploring the HI universe.

The late Prof. NAN Rendong, who founded the FAST project and served as its chief scientist and engineer, noted that the FAST HI survey would be able to address many important astrophysical questions. It could investigate the extent of HI disks, study the extended rotation curve up to unprecedented distances, map the distribution of dark matter in the local group, search for low-mass galaxies in void regions, and detect cold dark matter satellites and possible HI companions.

The FAST HI survey team, led by Dr. ZHU Ming from the FAST Operation and Development Center at the National Astronomical Observatories of the Chinese Academy of Sciences (NAOC), has been actively scanning the sky ever since FAST formally began operation in January 2020. The team made its first data release on June 19 in a paper published in Research in Astronomy and Astrophysics.

“This is a pilot study to test the observational strategy and data reduction pipeline for the large-scale HI survey, and the results demonstrate that FAST indeed has a high survey speed and can obtain HI spectra with higher spectral resolution than previous surveys,” said Dr. ZHU Ming, corresponding author of the paper.

The catalog release from the pilot survey contains 544 HI-detected galaxies. The most interesting result is that 16 of the FAST-detected sources have no optical counterparts, which means that FAST can discover galaxies that are possibly missed by optical telescopes.

Dr. ZHU said the objects are very interesting to galaxy formation theory and may represent a new type of object that contains dark matter and HI gas but has few stars because it fails to form them.

“Such type of object is predicted by cosmology models but has never really been confirmed by observation,” said Dr. ZHU.

To confirm whether seemingly “dark” galaxies really have no optical emissions, however, scientists will need very deep optical observations with a large telescope along with the FAST HI survey data.

Besides dark matter, galaxies also contain gas and stars. The gas is mainly in the form of HI, which is detectable by radio telescopes through an emission spectral line at a 21-cm wavelength.

So far, only about 35,000 gas galaxies have been detected. However, now that the FAST extragalactic HI survey is running at full speed, it has the potential to discover hundreds of thousands of gas galaxies as well as dark galaxies, tidal tail filaments, accretion streams, and ultra-diffuse dwarf galaxies.

Research in Astronomy and Astrophysics

Extragalactic H i Survey with FAST: First Look at the Pilot Survey Results