WASHINGTON, August 9, 2022 – Wearable human-machine interface devices, HMIs, can be used to control machines, computers, music players, and other systems. A challenge for conventional HMIs is the presence of sweat on human skin. 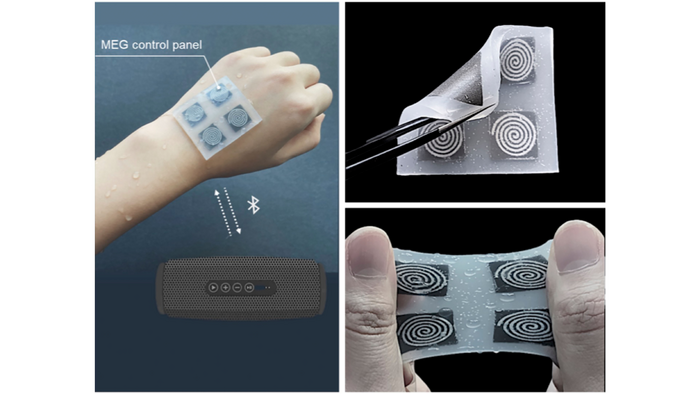 WASHINGTON, August 9, 2022 – Wearable human-machine interface devices, HMIs, can be used to control machines, computers, music players, and other systems. A challenge for conventional HMIs is the presence of sweat on human skin.

In Applied Physics Reviews, by AIP Publishing, scientists at UCLA describe their development of a type of HMI that is stretchable, inexpensive, and waterproof. The device is based on a soft magnetoelastic sensor array that converts mechanical pressure from the press of a finger into an electrical signal.

The device involves two main components. The first component is a layer that translates mechanical movement to a magnetic response. It consists of a set of micromagnets in a porous silicone matrix that can convert the gentle fingertip pressure into a magnetic field variation.

The second component is a magnetic induction layer consisting of patterned liquid metal coils. These coils respond to the magnetic field changes and generate electricity through the phenomenon of electromagnetic induction.

“Owing to the material’s flexibility and durability, the magnetoelastic sensor array can generate stable power under deformations, such as rolling, folding, and stretching,” said author Jun Chen, from UCLA. “Due to these compelling features, the device can be adopted for human-body powered HMI by transforming human biomechanical activities into electrical signals.”

The power required to run the HMI comes from the wearer’s movements. This means no batteries or other external power components are required, rendering the HMI more environmentally friendly and sustainable.

The device was tested in a variety of real-world situations, including in the presence of a water spray, such as might exist in the shower, a rainstorm, or during vigorous athletic activity. The device worked well when wet, since the magnetic field was not greatly affected by the presence of water.

The investigators studied a range of fabrication and assembly techniques to optimize the biomechanical-to-electrical energy conversion of the device. They found they could achieve a balance between performance and flexibility by controlling the thickness of the flexible film and the concentration of the magnetic particles.

To test their system, the investigators carried out a series of experiments in which a subject applied finger taps to turn a lamp off and on and control a music player.

“Our magnetoelastic sensor array not only wirelessly functions as the on and off buttons of a lamp but also controls a music player’s command features, representing the actions of play, pause, next, and previous,” Chen said.

These tests promise new applications for versatile water-resistant HMIs that can be used to control many types of smart devices.

Applied Physics Reviews features articles on significant and current topics in experimental or theoretical research in applied physics, or in applications of physics to other branches of science and engineering. The journal publishes both original research on pioneering studies of broad interest to the applied physics community, and reviews on established or emerging areas of applied physics. See https://aip.scitation.org/journal/are.