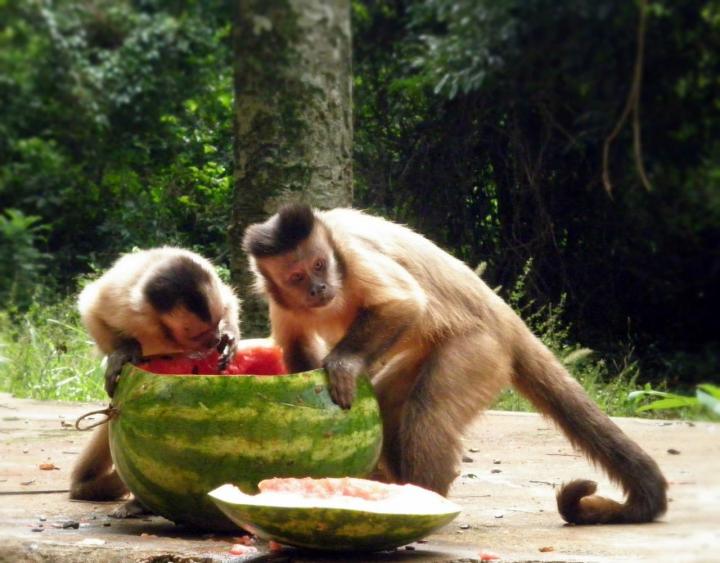 To better understand how primates modify their behaviour to adapt to the increasing presence of humans, a research team monitored 17 robust capuchin monkeys for a year and a half.

Confined to a small green area, surrounded by houses and small corn and soy plantations in the municipality of Foz do Iguaçu (Brazil), the primates were frequented by both city government officers and casual visitors. It was found that the monkeys spent more time roaming around in search for food, but less in feeding, resting and socialising. This is considered to be the result of a diet comprising predominantly of human-provided food and restriction of dispersal due to a fragmented habitat.

Capuchin monkeys are omnivorous primates with flexible social and feeding behaviour inhabiting Central and South America. Living in multi-male, multi-female groups of 3 to 30 individuals, they are heavily dependent on their social interactions, both agonistic and affiliative (grooming, social play, alloparental carrying etc.) However, they allocate their time according to many factors, including season, daytime, social status, sex and age. Their pronounced adaptability is also seen in their behavioural repertoire, which can rapidly increase in response to new stimuli in the environment.

In late 2011, the researchers began their study by spending three months familiarising the monkeys to the presence of human observers. Then, they conducted regular visits between January 2012 and June 2013, when they would monitor the population for a total of 10 hours a day. Thus, they obtained 15,208 behavioural records and noted 2,538 events of social interaction.

While the monkeys were seen to feed on the fruits of the native and exotic trees present in the habitat, as well as food provided by the city government officers and the passers-by, according to the data, their diet comprised 71% human-provided food, mostly given by casual visitors. The monkeys seemed to have accepted the scattered and unpredictable nature of their primary source, resulting in more time spent in searching for food (80%), when compared to populations in larger fragments and continuous forest. It could also be that the animals were spending extra time travelling to explore the many objects left behind by people.

Naturally, more time spent in searching for food results in less time left for social interactions. Additionally, roaming animals are staying apart from each other for longer periods of time.

On the other hand, the monkeys were reported to spend less time eating, which is considered to be a consequence of the human-provided food being much higher in energy content and availability, thus satisfying individual demands with less effort and smaller amounts.

To the surprise of the researchers, the capuchins were not found to spend more time resting, which is a commonly observed phenomenon in animals regularly fed by humans. The team attributes the deviation to pedestrians frequently disturbing the monkeys by using the forest patch as shortcuts.

As a result of food abundance, the monkeys were rarely seen to act in a hostile manner with each other. Alternatively, it could be that the population favours affiliative and cooperative social interactions since the fragmented habitat had led to well-pronounced kinship in the group.

“In conclusion, we found deviations in activity budget and social interactions of capuchins living in the studied small urban fragment, possibly influenced by the availability of anthropic food and the restrictions for dispersion imposed by the urban matrix,” say the scientists.

“These kind of studies are very important in Primate Conservation Biology, because we have an urgent demand to understand how primates adapt around human beings, as the contact between human and nonhuman primates are an inescapable aspect today.”

Scienmag Nov 19, 2019
A computer model is used to guide the design of tiny pillars in a microfluidic device used to detect malignant…