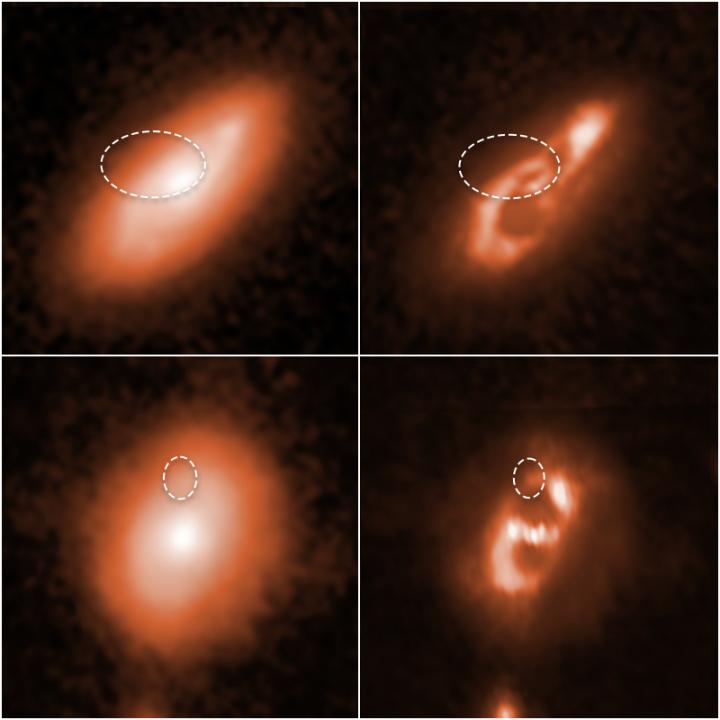 Called fast radio bursts (FRBs), these extraordinary events generate as much energy in a thousandth of a second as the Sun does in a year. Because these transient radio pulses disappear in much less than the blink of an eye, researchers have had a hard time tracking down where they come from, much less determining what kind of object or objects is causing them. Therefore, most of the time, astronomers don’t know exactly where to look.

Locating where these blasts are coming from, and in particular, what galaxies they originate from, is important in determining what kinds of astronomical events trigger such intense flashes of energy. The new Hubble survey of eight FRBs helps researchers narrow the list of possible FRB sources.

Flash in the Night

The first FRB was discovered in archived data recorded by the Parkes radio observatory on July 24, 2001. Since then astronomers have uncovered up to 1,000 FRBs, but they have only been able to associate roughly 15 of them to particular galaxies.

“Our results are new and exciting. This is the first high-resolution view of a population of FRBs, and Hubble reveals that five of them are localized near or on a galaxy’s spiral arms,” said Alexandra Mannings of the University of California, Santa Cruz, the study’s lead author. “Most of the galaxies are massive, relatively young, and still forming stars. The imaging allows us to get a better idea of the overall host-galaxy properties, such as its mass and star-formation rate, as well as probe what’s happening right at the FRB position because Hubble has such great resolution.”

In the Hubble study, astronomers not only pinned all of them to host galaxies, but they also identified the kinds of locations they originated from. Hubble observed one of the FRB locations in 2017 and the other seven in 2019 and 2020.

“We don’t know what causes FRBs, so it’s really important to use context when we have it,” said team member Wen-fai Fong of Northwestern University in Evanston, Illinois. “This technique has worked very well for identifying the progenitors of other types of transients, such as supernovae and gamma-ray bursts. Hubble played a big role in those studies, too.”

The galaxies in the Hubble study existed billions of years ago. Astronomers, therefore, are seeing the galaxies as they appeared when the universe was about half its current age.

Many of them are as massive as our Milky Way. The observations were made in ultraviolet and near-infrared light with Hubble’s Wide Field Camera 3.

Ultraviolet light traces the glow of young stars strung along a spiral galaxy’s winding arms. The researchers used the near-infrared images to calculate the galaxies’ mass and find where older populations of stars reside.

The images display a diversity of spiral-arm structure, from tightly wound to more diffuse, revealing how the stars are distributed along these prominent features. A galaxy’s spiral arms trace the distribution of young, massive stars. However, the Hubble images reveal that the FRBs found near the spiral arms do not come from the very brightest regions, which blaze with the light from hefty stars. The images help support a picture that the FRBs likely do not originate from the youngest, most massive stars.

These clues helped the researchers rule out some of the possible triggers of types of these brilliant flares, including the explosive deaths of the youngest, most massive stars, which generate gamma-ray bursts and some types of supernovae. Another unlikely source is the merger of neutron stars, the crushed cores of stars that end their lives in supernova explosions. These mergers take billions of years to occur and are usually found far from the spiral arms of older galaxies that are no longer forming stars.

The team’s Hubble results, however, are consistent with the leading model that FRBs originate from young magnetar outbursts. Magnetars are a type of neutron star with powerful magnetic fields. They’re called the strongest magnets in the universe, possessing a magnetic field that is 10 trillion times more powerful than a refrigerator door magnet. Astronomers last year linked observations of an FRB spotted in our Milky Way galaxy with a region where a known magnetar resides.

“Owing to their strong magnetic fields, magnetars are quite unpredictable,” Fong explained. “In this case, the FRBs are thought to come from flares from a young magnetar. Massive stars go through stellar evolution and becomes neutron stars, some of which can be strongly magnetized, leading to flares and magnetic processes on their surfaces, which can emit radio light. Our study fits in with that picture and rules out either very young or very old progenitors for FRBs.”

The observations also helped the researchers strengthen the association of FRBs with massive, star-forming galaxies. Previous ground-based observations of some possible FRB host galaxies did not as clearly detect underlying structure, such as spiral arms, in many of them. Astronomers, therefore, could not rule out the possibility that FRBs originate from a dwarf galaxy hiding underneath a massive one. In the new Hubble study, careful image processing and analysis of the images allowed researchers to rule out underlying dwarf galaxies, according to co-author Sunil Simha of the University of California, Santa Cruz.

Although the Hubble results are exciting, the researchers say they need more observations to develop a more definitive picture of these enigmatic flashes and better pinpoint their source. “This is such a new and exciting field,” Fong said. “Finding these localized events is a major piece to the puzzle, and a very unique puzzle piece compared to what’s been done before. This is a unique contribution of Hubble.”

The team’s results will appear in an upcoming issue of The Astrophysical Journal.

The Hubble Space Telescope is a project of international cooperation between NASA and ESA (European Space Agency). NASA’s Goddard Space Flight Center in Greenbelt, Maryland, manages the telescope. The Space Telescope Science Institute (STScI) in Baltimore, Maryland, conducts Hubble science operations. STScI is operated for NASA by the Association of Universities for Research in Astronomy in Washington, D.C.