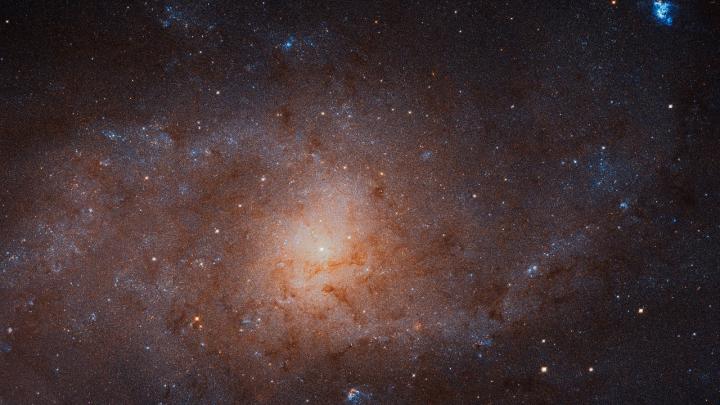 The NASA/ESA Hubble Space Telescope has captured the most detailed image yet of a close neighbour of the Milky Way — the Triangulum Galaxy, a spiral galaxy located at a distance of only three million light-years. This panoramic survey of the third-largest galaxy in our Local Group of galaxies provides a mesmerising view of the 40 billion stars that make up one of the most distant objects visible to the naked eye.

This new image of the Triangulum Galaxy — also known as Messier 33 or NGC 598 — has a staggering 665 million pixels and showcases the central region of the galaxy and its inner spiral arms. To stitch together this gigantic mosaic, Hubble’s Advanced Camera for Surveys needed to create 54 separate images.

Under excellent dark-sky conditions, the Triangulum Galaxy can be seen with the naked eye as a faint, blurry object in the constellation of Triangulum (the Triangle), where its ethereal glow is an exciting target for amateur astronomers.

At only three million light-years from Earth, the Triangulum Galaxy is a notable member of the Local Group — it is the group’s third-largest galaxy, but also the smallest spiral galaxy in the group [1]. It measures only about 60 000 light-years across, compared to the 200 000 light-years of the Andromeda Galaxy; the Milky Way lies between these extremes at about 100 000 light-years in diameter [2].

In contrast to the two larger spirals, the Triangulum Galaxy doesn’t have a bright bulge at its centre and it also lacks a bar connecting its spiral arms to the centre. It does, however, contain a huge amount of gas and dust, giving rise to rapid star formation. New stars form at a rate of approximately one solar mass every two years.

The abundance of gas clouds in the Triangulum Galaxy is precisely what drew astronomers to conduct this detailed survey. When stars are born, they use up material in these clouds of gas and dust, leaving less fuel for new stars to emerge. Hubble’s image shows two of the four brightest of these regions in the galaxy: NGC 595 and NGC 604. The latter is the second most luminous region of ionised hydrogen within the Local Group and it is also among the largest known star formation regions in the Local Group.

These detailed observations of the Triangulum Galaxy have tremendous legacy value — combined with those of the Milky Way, the Andromeda Galaxy and the irregular Magellanic Cloud galaxies, they will help astronomers to better understand star formation and stellar evolution.

[1] Our galaxy, the Milky Way, is part of the Local Group, an assembly of more than 50 galaxies bound together by gravity. Its largest member is the Andromeda Galaxy — also known as Messier 31 — followed by the Milky Way and the Triangulum Galaxy. The remaining members of the Local Group are dwarf galaxies, each orbiting one of the three larger ones.

[2] The much bigger Andromeda Galaxy was mapped by Hubble in 2015, creating the sharpest and largest image of this galaxy and the largest Hubble image ever (heic1502 – https://spacetelescope.org/news/heic1502/).

The fellowship of the wing: Pigeons flap faster to fly together