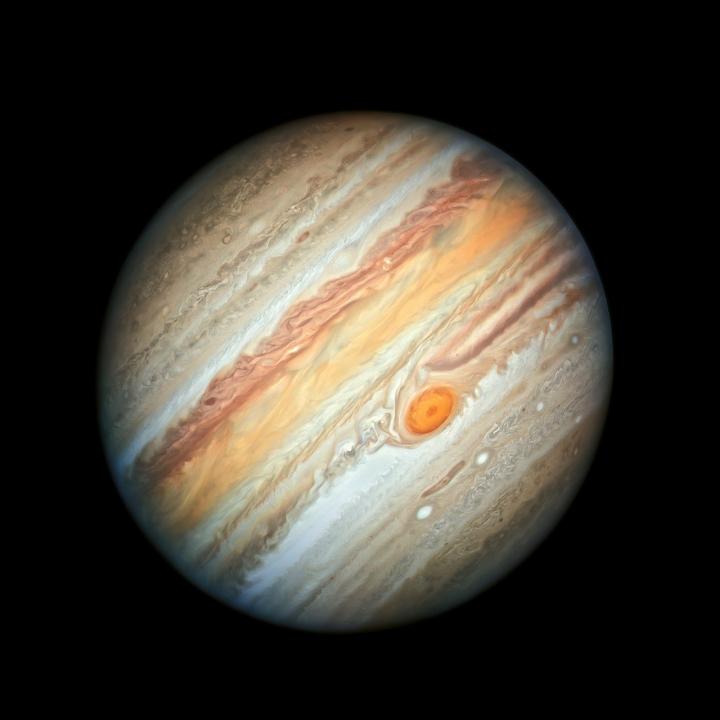 The NASA/ESA Hubble Space Telescope reveals the intricate, detailed beauty of Jupiter’s clouds in this new image taken on 27 June 2019 [1]. It features the planet’s trademark Great Red Spot and a more intense colour palette in the clouds swirling in the planet’s turbulent atmosphere than seen in previous years.

Among the most striking features in the image are the rich colours of the clouds moving toward the Great Red Spot. This huge anticyclonic storm is roughly the diameter of Earth and is rolling counterclockwise between two bands of clouds that are moving in opposite directions toward it.

As with previous images of Jupiter taken by Hubble, and other observations from telescopes on the ground, the new image confirms that the huge storm which has raged on Jupiter’s surface for at least 150 years continues to shrink. The reason for this is still unknown so Hubble will continue to observe Jupiter in the hope that scientists will be able to solve this stormy riddle. Much smaller storms appear on Jupiter as white or brown ovals that can last as little as a few hours or stretch on for centuries.

The Hubble image also highlights Jupiter’s distinct parallel cloud bands. These bands consist of air flowing in opposite directions at various latitudes. They are created by differences in the thickness and height of the ammonia ice clouds; the lighter bands rise higher and have thicker clouds than the darker bands. The different concentrations are kept separate by fast winds which can reach speeds of up to 650 kilometres per hour.

These observations of Jupiter form part of the Outer Planet Atmospheres Legacy (OPAL) programme, which began in 2014. This initiative allows Hubble to dedicate time each year to observing the outer planets and provides scientists with access to a collection of maps, which helps them to understand not only the atmospheres of the giant planets in the Solar System, but also the atmosphere of our own planet and of the planets in other planetary systems.

[1] This image was captured by Hubble’s Wide Field Camera 3, when the planet was 644 million kilometres from Earth.

Scienmag Sep 25, 2019
Credit: Zhang lab/CSHL, 2019 Myelodysplastic syndrome (MDS), one of the most common blood cancers, has…